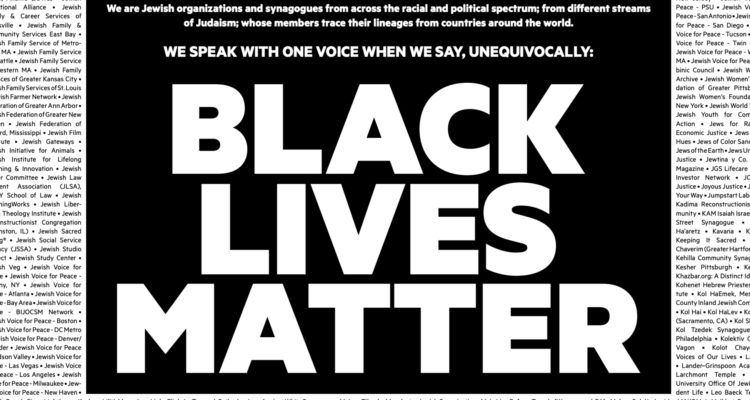 The Black Lives Matter Organization’s promotion of Jew-hatred and Israel-hatred:

As ZOA has repeatedly made clear, the phrase “Black lives matter” is obviously true and all other lives matter, such as all Muslim, Jewish, Asian, Hispanic, Indian, Native American, Hindu, Buddhist, Christian, Arab lives, etc. ZOA strongly opposes and condemns anti-Black racism. But the “BLM movement” or organization, promoted by the New York Times ad/letter, is a different story. The BLM movement is Marxist, violent, anti-Israel, antisemitic, Farrakhan-loving, anti-White, and racist.

The M4BL/BLM platform also contains “resource” sites that promote (violent) “resistance” against the U.S. and Israel; falsely accuse Israel of killing and “targeting unarmed civilians” including children; falsely accuse both the U.S. and Israel of “unchecked state-sanctioned racialized violence”; and promote multiple cultural, academic and economic boycott, sanctions and divestment campaigns against Israel’s Jews and those who do business with or interact with Israel.

The anti-Israel antisemitic plank of the M4BL/BLM platform has never been abrogated or renounced.

BLM co-founder Patrisse Collors and BLM Los Angeles lead organizer Melina Abdullah (a Farrakhan follower) were key instigators of the anti-Jewish pogrom in the Jewish Fairfax district of Los Angeles over Shavuot (May 30-31, 2020). BLM and its allies destroyed, vandalized, burned, and defaced multiple Jewish synagogues, Jewish schools, and Jewish stores and businesses, and spray-painted “Free Palestine” and its abbreviated form “FP,” along with “ACAB” (All Cops Are Bastards) on synagogue and Jewish school walls.

BLM also joined anti-Israel “Days of Rage” demonstrations throughout the U.S. and elsewhere, beginning July 1, 2020, calling for Israel’s destruction, and accusing Israel of murdering children and other libels.

In other words, the BLM movement or organization does not deserve the support of anyone who cares about Israel, America, or combatting antisemitism and real racism or decency, morality, or civility. ZOA was pleased to see that NCSY removed its name from the BLM movement ad/letter. Every other Jewish group that cares about the safety of Israel and the Jewish people should likewise remove its signature.

ADL’s own website explains that: “Jewish Voice for Peace is a radical anti-Israel activist group that advocates for a complete economic, cultural, and academic boycott of the state of Israel. . . . JVP considers supporters of Israel, or even critics of Israel who do not hew to JVP’s own extreme views, to be complicit in Israel’s purported acts of racist oppression of Palestinians. . . . JVP often links Israel to prominent social justice issues in the U.S. — like police brutality — in an attempt to implicate Israel in violations or offenses committed here. For example, after the alt-right rally in Charlottesville in August 2017, JVP called Zionism akin to white supremacism and compared Richard Spencer’s white nationalism to Jewish nationalism. JVP’s so-called “Deadly Exchange” campaign seeks to blame Israel for police brutality on American streets. . .”

How could Jonathan Greenblatt’s ADL then sign a full page NY Times ad promoting an antisemitic, Farrakhan-loving BLM group, co-signed by Israel-bashers such as JVP who defame Israel?

In an era of virulent and rising Jew-hatred and Israel-hatred, signing this ad helps promote and mainstreams BLM’s ugly anti-Jewish and anti-Jewish State agenda.

ZOA strongly urges Jewish groups to publicly remove their names from this repugnant and dangerous ad.

We would love to hear from you! Please fill out this form and we will get in touch with you shortly.
Trending Z
Uncategorized September 13, 2020
FLASH: ISRAEL-JORDAN PEACE TREATY (1994) GUARANTEES JEWS ACCESS TO THE TEMPLE MOUNT – LET MY PEOPLE PRAY
Uncategorized September 13, 2020
ZOA Analysis: Most American Rabbis Who Are Boycotting Some Israeli Ministers Are From Extremist Left Wing Groups (J Street; T’ruah; JVP)
Uncategorized September 13, 2020
Israel’s “Right of Return” Grandparent Clause is De-Judaizing the Jewish State – Eliminate It
Uncategorized September 13, 2020
Exclusive: ZOA Accuses Ilhan Omar of Hating the U.S. ‘as Much as Israel,’ Lauds Kevin McCarthy for ‘Throwing Her Off the HFAC’
Center for Law & Justice
We work to educate the American public and Congress about legal issues in order to advance the interests of Israel and the Jewish people.
We assist American victims of terrorism in vindicating their rights under the law, and seek to hold terrorists and sponsors of terrorism accountable for their actions.
We fight anti-Semitism and anti-Israel bias in the media and on college campuses.
We strive to enforce existing law and also to create new law in order to safeguard the rights of the Jewish people in the United States and Israel.
Our Mission
ZOA STATEMENT
The ZOA speaks out for Israel – in reports, newsletters, and other publications. In speeches in synagogues, churches, and community events, in high schools and colleges from coast to coast. In e-mail action alerts. In op-eds and letters to the editor. In radio and television appearances by ZOA leaders. Always on the front lines of pro-Israel activism, ZOA has made its mark.
Related Articles
OP-ED ZOA Mourns Passing of Ariel Founder & Visionary, Ron Nachman