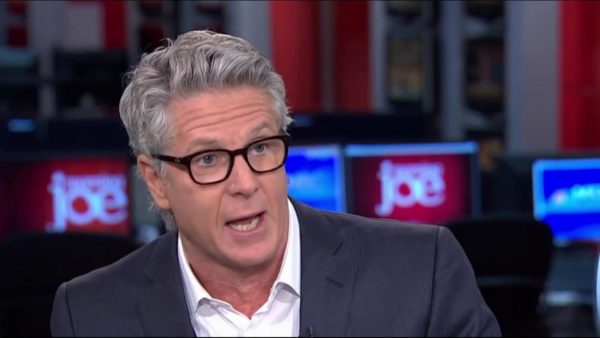 Note: ZOA does not endorse any candidates.

Donny Deutsch’s tirade on MSNBC’s “Morning Joe” on September 23, 2020, was so ridiculous, outrageous, and insulting, especially to American Jews, that Deutsch should never be invited by the media again. Deutsch absurdly likened the duly elected President of the United States, Noble Peace Prize nominee Donald Trump, to mass-murderer monster Adolph Hitler, and then castigated and disparaged Jewish Americans who plan to vote to re-elect President Trump.

How dare Donny Deutsch condemn any voter for voting for a particular candidate! Exercising the cherished right to vote for the candidate of one’s choice should not subject any voter or group of voters to insults and abuse.

(By the way, Donny, lemmings can crawl, swim and burrow, but they don’t walk. And the lemmings’ mass suicide myth came from a 1958 Disney film in which the film-makers threw the lemmings off a cliff to their deaths, to obtain fake footage. But nothing Donny Deutsch said had any basis in reality.)

Speaking of abuse, Donny Deutsch absurdly and horrifically claimed, “There is no difference from what Donald Trump is preaching from what Adolph Hitler preached in the early 30s. Let’s just say it once and for all.”

President Trump: “A vote for Republicans is a vote for safe communities, great jobs, and a limitless future for all Americans. All Americans—race, color, creed—all Americans.”

Hitler’s Dec. 11, 1941 speech declaring war on the U.S.:  American decay is the “product of Jewish or Negroid blood mixture.”

President Trump: “I kept my promise, recognized the true capital of Israel and opened the American Embassy in Jerusalem. I also recognized Israeli sovereignty over the Golan Heights. That was a 52-year development that I got done in about a day. They’d been negotiating that sovereignty over the Golan Heights, I got it done immediately. 52 years, they worked on that. But instead of endless war, we are forging peace in the Middle East. It’s so great. Peace in the Middle East.”

Hitler’s Sportspalast speech: “The result of this war will be the complete annihilation of the Jews. Now for the first time they will not bleed other people to death. . . . And the hour will come when the enemy of all times [Jews], or at least of the last thousand years, will have played his part to the end.”

Hitler’s Jan. 30, 1939 speech: “If international financial Jewry in and outside Europe should succeed in plunging the peoples once again into a world war, then the result will [be] . . .  annihilation of the Jewish race in Europe.”

Donny Deutsch is the one who is not looking at history. He is a moronic, hateful lunatic. He should never be given a platform again.

We would love to hear from you! Please fill out this form and we will get in touch with you shortly.
Trending Z
News September 25, 2020
ZOA Condemns U.S. State Dept. & U.S. Amb. Nides For Siding with Antisemitic, Discriminatory Palestinian & Hamas Terrorists re: the Temple Mount, Violating Jews’ Religious Freedom
Uncategorized September 25, 2020
FLASH: ISRAEL-JORDAN PEACE TREATY (1994) GUARANTEES JEWS ACCESS TO THE TEMPLE MOUNT – LET MY PEOPLE PRAY
Uncategorized September 25, 2020
ZOA Analysis: Most American Rabbis Who Are Boycotting Some Israeli Ministers Are From Extremist Left Wing Groups (J Street; T’ruah; JVP)
Uncategorized September 25, 2020
Israel’s “Right of Return” Grandparent Clause is De-Judaizing the Jewish State – Eliminate It
Center for Law & Justice
We work to educate the American public and Congress about legal issues in order to advance the interests of Israel and the Jewish people.
We assist American victims of terrorism in vindicating their rights under the law, and seek to hold terrorists and sponsors of terrorism accountable for their actions.
We fight anti-Semitism and anti-Israel bias in the media and on college campuses.
We strive to enforce existing law and also to create new law in order to safeguard the rights of the Jewish people in the United States and Israel.
Our Mission
ZOA STATEMENT
The ZOA speaks out for Israel – in reports, newsletters, and other publications. In speeches in synagogues, churches, and community events, in high schools and colleges from coast to coast. In e-mail action alerts. In op-eds and letters to the editor. In radio and television appearances by ZOA leaders. Always on the front lines of pro-Israel activism, ZOA has made its mark.
Related Articles
OP-ED ZOA Mourns Passing of Ariel Founder & Visionary, Ron Nachman