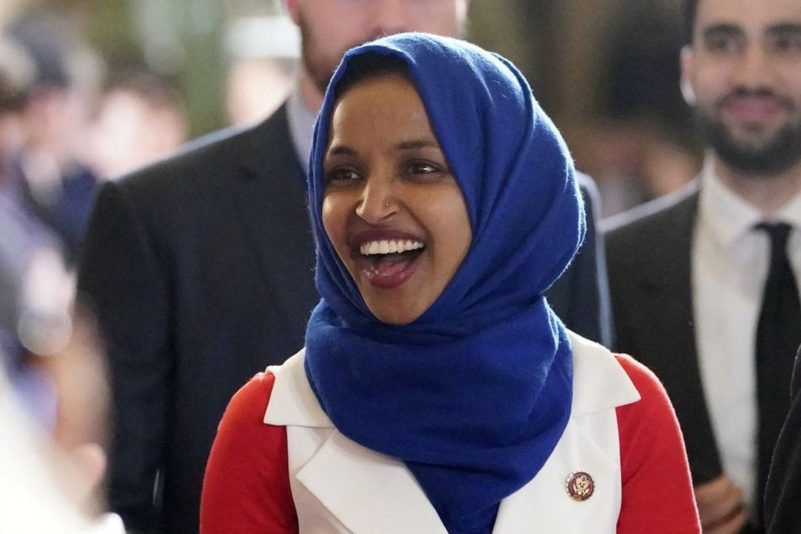 Notorious Jew-hater and Israel-hater Cong. Ilhan Omar (D-MN) “celebrated” her re-election over her Republican and Marijuana Now party challengers, by immediately resuming Omar’s habit of falsely accusing close U.S. ally Israel of blood libels.  In a tweet on November 5, Omar falsely accused Israel of “ethnic cleansing” in a “direct violation of international law” that left “an entire community homeless” that “will likely experience lifelong trauma” and demanded that the U.S. should not “bankroll” Israel’s actions.  In fact, Israel simply lawfully removed seven Bedouin tents and eight pens that were illegally pitched in a firing zone in the Jordan Valley.  The tents were unlawful temporary creations pitched for anti-Israel propaganda purposes; they were not homes in a real community.

Especially today – on the anniversary of Kristallnacht – we need to remember the pernicious impact of antisemitic blood libels.

Congress needs to finally denounce Rep. Omar’s antisemitism and remove her from her committees.  Omar moreover must not be allowed to join committees of the 2021-2022 Congress, or a potential new Democratic administration.

ZOA urges political leaders and Jewish leaders and Christian and Muslim leaders and groups such as ADL and AJC and AIPAC and the JCRC’s and the Reform, Conservative, Orthodox, and Reconstructionist Jewish movements, and the Conference of Presidents of Major American Jewish Organizations to publicly condemn the dangerous and hysterical Jew-hating Israelophobia of this terrible racist member of Congress Ilhan Omar!

Rep. Omar has made numerous prior anti-Jewish, anti-American, and anti-Israel statements and legislative actions.  For instance, Omar:

Last spring, Ben Weingarten, the author of the eye-opening book, “American Ingrate: Ilhan Omar and the Progressive-Islamist Takeover of the Democratic Party,” was the first featured author at the ZOA Online Book Club.  Mr. Weingarten spoke of Ilhan Omar’s privileged background in Somalia; campaign with Bernie Sanders to lift Iranian sanctions as an unregistered foreign agent for the Iranian regime; and Omar’s legitimization of Jew-hatred, hatred of the Jewish state, and hatred of America.  (See video part 1 and part 2.)

America and the Jewish community cannot allow demonstrated Jew-haters and America-haters such as Omar rise to committee or administration positions of power.

We dare not be silent!

We would love to hear from you! Please fill out this form and we will get in touch with you shortly.
Trending Z
News November 9, 2020
At ZOA Gala Secy Pompeo Gave the Greatest, Most Pro-Israel Speech Ever Delivered by a Public Official
News November 9, 2020
Dershowitz in Arutz 7: NYC’s Temple Emanu-El Silences a Pro-Israel Voice & Promotes an Anti-Israel Voice
Uncategorized November 9, 2020
Jewish Press: Has Deborah Lipstadt Undercut Both Herself and Future Antisemitism Envoys?
News November 9, 2020
NEW YORK POST: Democratic Leaders’ Shocking Silence Over Attacks on Israel by Fellow Dems
Our Mission
ZOA STATEMENT
The ZOA speaks out for Israel – in reports, newsletters, and other publications. In speeches in synagogues, churches, and community events, in high schools and colleges from coast to coast. In e-mail action alerts. In op-eds and letters to the editor. In radio and television appearances by ZOA leaders. Always on the front lines of pro-Israel activism, ZOA has made its mark.
Center for Law & Justice
We work to educate the American public and Congress about legal issues in order to advance the interests of Israel and the Jewish people.
We assist American victims of terrorism in vindicating their rights under the law, and seek to hold terrorists and sponsors of terrorism accountable for their actions.
We fight anti-Semitism and anti-Israel bias in the media and on college campuses.
We strive to enforce existing law and also to create new law in order to safeguard the rights of the Jewish people in the United States and Israel.
Related Articles
OP-ED Dershowitz: Forward Article is “Most Despicable Ever in Jewish Media”