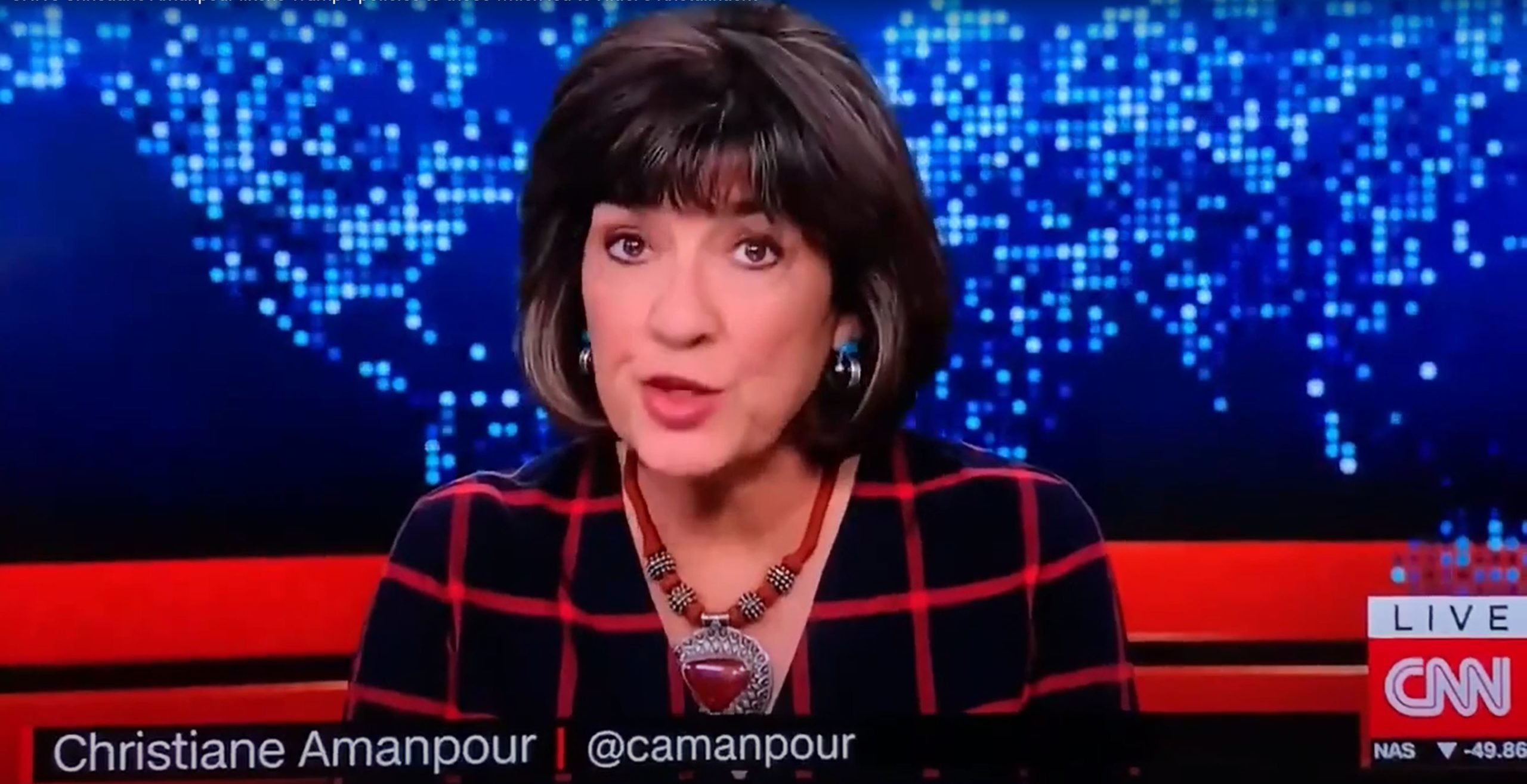 Last week, ZOA called for CNN to fire CNN’s chief international anchor Christiane Amanpour after Amanpour slanderously analogized the pro-Jewish Trump administration to the Nazis’ Kristallnacht.  This was a new capstone to Amanpour’s long history of bias against Jews, Israel, and pro-Israel officials.  Amanpour has just made matters worse with an insulting “non-apology.”  CNN and its parent AT&T Inc. need to act already.  In addition to firing Amanpour, CNN and AT&T need to investigate everyone involved in Amanpour’s slander and start letting guilty heads roll (figuratively).  And we need real change in the policies that have resulted in CNN’s and Amanpour’s chronic distortions and defamation of supporters of the Jewish state.

Anchors don’t operate in a vacuum.  There are producers, writers, and a whole cooperate hierarchy involved in an anchor’s statements.  Just this week, CNN news anchor Anderson Cooper acknowledged, on the front page of CNN’s website, that in addition to himself, “there are a number of writers on a program that write content” which Cooper then may edit or read verbatim.

Like most companies, CNN’s parent AT&T has a “Code of Ethics” that demands honesty and fair dealing from all its employees and officials.  Codes of Ethics are meaningless if there are no consequences for those responsible for broadcasting dishonest, divisive insults.

Notably, Amanpour has not apologized for her horrendous analogy:  She never said “I’m sorry,” or “I was wrong.”  She never retracted the real content and intent of her statements.  She never even acknowledged that she slanderously equated and analogized Kristallnacht’s horrors to pro-Jewish, pro-Israel, pro-American President Donald Trump.

Instead, Amanpour tried to rationalize her obviously deliberate defamatory remarks by claiming that she merely somehow, out of the blue, unintentionally “juxtaposed two thoughts.”  Amanpour stated:

“And finally tonight, a comment on my program at the end of last week. I observed the 82nd anniversary of Kristallnacht, as I often do – it is the event that began the horrors of the Holocaust. I also noted President Trump’s attacks on history, facts, knowledge, and truth. I should not have juxtaposed the two thoughts.  Hitler and his evils stand alone, of course, in history. I regret any pain my statement may have caused.  My point was to say how democracy can potentially slip away, and how we must always zealously guard our democratic values.”

Amanpour’s statement that she regretted “any pain [her] statement may have caused” moreover essentially blamed the listener.  Amanpour’s phrasing was basically another way of saying, “maybe certain listeners were oversensitive.”

Also, like her initial shameful statement, Amanpour’s “non-apology” again failed to mention that Kristallnacht was a pogrom aimed at innocent Jews.  Jews were slaughtered and taken to concentration camps.  Nazi mobs smashed and looted thousands of Jewish businesses and synagogues.

Ironically, as some commentators have pointed out, Amanpour made her false analogies while Antifa and BLM radicals were busy physically attacking peaceful pro-Trump marchers in Washington.  Amanpour’s remarks can only inflame the violence.

For instance, Amanpour repeatedly falsely asserted that the Jewish presence and homes on historic Jewish lands in Judea and Samaria are “illegal.”  In her film, Amanpour also absurdly blamed Israel’s restoration of the prayer plaza in front of the Western Wall for creating the disputes over Jerusalem.   Amanpour thereby ignored the pogroms in which Arabs murdered hundreds of Jews in Jerusalem in the 1930s, and the Arabs’ seizure of Jerusalem’s Jewish quarter in 1948, dynamiting of 58 synagogues, and murdering or expulsion of all the Jews who had lived in Jerusalem’s old city for centuries and millennia.

This past January, during Amanpour’s interview of Jared Kushner after President Trump’s Vision for Peace in the Middle East was announced, Kushner had to correctly explain that Amanpour’s questions were laced with false premises.  During the interview, Amanpour also promoted the views of hostile Palestinian leaders and (retired) far left-winger Yossi Beilin.  (Beilin was the head of the far-left Meretz party and one of the architects of the disastrous Oslo Accords – in which Israel gave up much of her control of large parts of Judea and Samaria to the blood-soaked PLO – and in return, the PLO incited and paid Arab terrorists to perpetrate suicide bombings and murder and maim thousands of innocent Israelis.)

And during Amanpour’s interview with George Mitchell following former President Obama’s infamous “1967 lines” speech, Amanpour repeatedly falsely called the 1949 Armistice lines (the lines where the fighting stopped after six Arab nations invaded Israel; all parties agreed that the lines have no legal effect) as “1967 borders” and belittled Israeli concerns about Obama’s dangerous speech.

And there’s much more.  The Committee for Accuracy in Middle East Reporting and Analysis (CAMERA) published 33 articles, dated from 1996 through to the present, documenting instance after instance of Amanpour’s anti-Jewish, anti-Israel (and anti-Christian) bias and falsehoods.

It’s time for AT&T and its CEO John Stankey and CNN president Jeff Zucker to get involved and undertake a real reckoning and house-cleaning at CNN, starting with Christiane Amanpour and company.

We would love to hear from you! Please fill out this form and we will get in touch with you shortly.
Trending Z
News November 18, 2020
New Biden Nominees Opposed Abraham Accords & Involved in Israeli Election Interference
Uncategorized November 18, 2020
ZOA Letter to DOJ & FBI on New “Mapping Project” Antisemitic Threat by ZOA Pres. Morton Klein, Dir. of Research/Special Projects Liz Berney, Esq., Dir. Center for Law & Justice Susan Tuchman, Esq.
Op-Ed November 18, 2020
ZOA’s Mort Klein JPost Op-Ed: BDS Mapping Project Targets Every Jew, Including Left Wing, Israelophobic Jews
News November 18, 2020
U.S. Senators Criticize Tamara Wittes, Biden Nominee’s Anti-Israel Bias ― Jewish Groups are Deafeningly Silent
Center for Law & Justice
We work to educate the American public and Congress about legal issues in order to advance the interests of Israel and the Jewish people.
We assist American victims of terrorism in vindicating their rights under the law, and seek to hold terrorists and sponsors of terrorism accountable for their actions.
We fight anti-Semitism and anti-Israel bias in the media and on college campuses.
We strive to enforce existing law and also to create new law in order to safeguard the rights of the Jewish people in the United States and Israel.
Our Mission
ZOA STATEMENT
The ZOA speaks out for Israel – in reports, newsletters, and other publications. In speeches in synagogues, churches, and community events, in high schools and colleges from coast to coast. In e-mail action alerts. In op-eds and letters to the editor. In radio and television appearances by ZOA leaders. Always on the front lines of pro-Israel activism, ZOA has made its mark.
Related Articles
OP-ED BY: ZOA Staff ZOA Praises JCRC For Expelling Anti-Israel BDS From Israel Day Parade