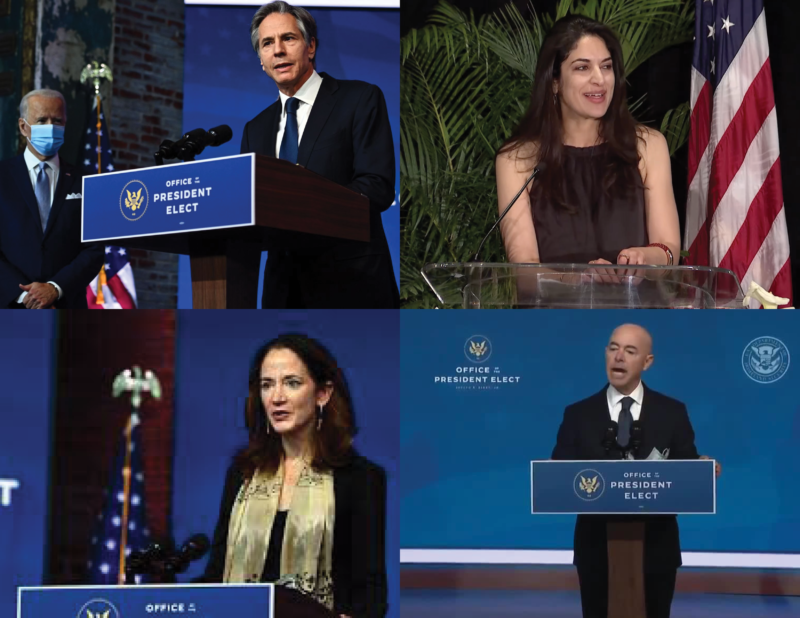 ZOA is deeply concerned by President-elect Joe Biden’s recently announced high-level appointments, including: Tony Blinken for Secretary of State; Avril Haines for Director of National Intelligence; Reema Dodin for Deputy Director of the White House Office of Legislative Affairs; and Alejandro Mayorkas for Secretary of the Department of Homeland Security (DHS).

Antony Blinken Opposed Designating the IRGC Terror Organization:  In a 2017 CNN appearance, Blinken opposed sanctioning and designating Iran’s Islamic Revolutionary Guard Corps (IRGC) as a foreign terrorist organization – even though terror is the IRGC’s raison d’être.  The Constitution of the Islamic Republic of Iran established the IRGC to perpetrate terror against “enemies of Allah” (meaning, the U.S., Israel, and others) and expand Iranian Islamic sovereignty throughout the world.  The IRGC’s terror involvements have included: planning 9-11; murdering hundreds of American troops in Iraq; Iranian nuclear proliferation and weapons delivery systems development; plotting to set off a bomb in a Georgetown restaurant (to murder a Saudi diplomat and innocent American diners); providing weapons, training, funding, and logistical support to Iranian terrorist proxies, including Hezbollah, Hamas, Iraq-based militias, the PFLP (Popular Front for the Liberation of Palestine), Palestinian Islamic Jihad, and the Taliban); and numerous other major terror attacks, including on the Buenos Aires Jewish Center and U.S. personnel and facilities.

Blinken’s Apology to Antisemite Sarsour: After notorious Jew-hater, BDS-promoter and terror-promoter Linda Sarsour spoke at the Democratic National Convention in August, one Biden campaign staffer, Andrew Bates, attempted to mollify the Jewish community and others who are horrified by Sarsour’s antisemitism and anti-Americanism, by sending an email stating that Biden “condemns her [Sarsour’s] views and opposes BDS, as does the Democratic platform. . . . She [Sarsour] has no role in the Biden campaign whatsoever.”  Sarsour responded by tweeting a veiled threat about the Biden campaign’s need for Muslim votes.

Also, during his speech at the J Street Conference in 2012, Blinken praised radical anti-Israel J Street as a “ constructive force.”

Avril Haines:  Haines signed a vicious J Street letter, along with 30 other notoriously hostile-to-Israel former foreign policy officials (Strobe Talbott, Martin Indyk, Dan Kurtzer, and Ben Rhodes).  The letter urged the Democratic platform to include more criticism of Israel; promoted false equivalence between the Palestinian Arab terrorists/inciters and Israeli Jews by using the phrase “violence, terrorism, and incitement from ALL sides”; opposed Israel’s lawful sovereign rights in Judea and Samaria; opposed the rights of Jews to build in historic Jewish lands; opposed Israeli “occupation” (a term that falsely delegitimizes Israel’s right to her land); opposed Jews building in eastern Jerusalem and Judea/Samaria; complained the past Democratic platforms are “silent on Israeli actions that undermine Palestinian rights”; and supported “the rights of Palestinians.”  (See “Biden’s Foreign-Policy Boss Called for an Anti-Israel DNC Platform,” by Daniel Greenfield, JNS, May 5, 2020.)   As journalist Greenfield noted, the J Street letter that Haines signed was a sell-out of the pro-Israel community.

Reema Dodin:  Dodin’s background as a Palestinian propagandist and supporter of suicide bombing is so egregious that she should be fired on the spot.

Dodin justified and even encouraged suicide bombings against Jews; organized anti-Israel rallies at UC Berkeley; spread Medieval-style blood libels, including the false claim that Israel denies Palestinian Arabs food, water, and medical treatment; condemned U.S. post-9-11 actions against the Taliban; blamed 9-11 on U.S. support for Israel; was a leader of the Hamas-affiliated Muslim Students Association; was reportedly a mole for Hamas-affiliated CAIR; and recommended a witness for a Senate “Muslim Rights Hearing” who founded a group to thwart FBI counterterror operations.  And more.

For instance, in a speech at the United Methodist Church in Lodi, California, Dodin justified suicide bombing as “the last resort of a desperate people.”  (“UC Student Gives Palestinian Perspective,” by Nicholas Grudin, Lodi News – News-Sentinel, Apr. 24, 2020.)   As one commentator noted, the last resort after what?  Pogroms in which Arabs murdered hundreds of Jews in the 1920s and 1930s?  Repeated wars to drive the Jews into the sea?  Terror attacks on Jewish schools and buses?

During the same speech in Lodi, Dodin falsely claimed that the Israeli government cuts off water supplies “to coerce the Palestinian population.”  In fact, Israel provides abundant water to the Palestinian Arabs – far more than specified in the Oslo accords.  Dodin also falsely portrayed Palestinian Arabs (the recipients of the most generous aid in the world) as malnourished and denied medical care.

As a staffer for Senator Dick Durbin, Dodin recommended a witness for a Senate “Muslim Rights Hearing” who founded an organization that sued the DOJ to force it to disclose FBI undercover operations, and advises Muslim witnesses or suspects to not talk to the FBI.

Further, “CAIR’s Spies in Congress,” a section in the well-documented 2016 book, “Muslim Mafia: Inside the Secret Underworld That’s Conspiring to Islamize America,” by former federal agent and counterterrorism expert P. David Gaubatz and Paul E. Sperry, describes Reema Dodin’s involvements with the Hamas-linked Council on American-Islamic Relations (CAIR), Dodin’s Islamic and other justifications for suicide bombing and jihad, and Dodin’s opposition to America combatting the terror group Al-Qaeda, as follows:

“Over at the Senate, CAIR has cultivated Muslim moles inside the offices of key Democrat leaders – including Senator Dick Durbin of Illinois, chairman of the Senate Judiciary Committee’s subcommittee on human rights. His aide Reema Dodin — who’s in regular contact with CAIR — is a Palestinian rights activist who organized anti-Israel rallies as a campus radical at UC Berkeley.”

“Commenting on the 9-11 attacks as a leader of the radical Muslim Students Association — which was founded by Muslim Brotherhood members — Dodin explained away the suicide attacks as a tragic but inevitable response to U.S. support for Israel, which she says is ‘angering’ Muslims the world over.”

“‘No one wants to stop and think that these young men, in the prime of their lives, choose to do this to themselves.  Why?’ she said in an interview with a campus magazine.  ‘Because now you have three generations of Palestinians born under occupation. Maybe if you start to look at Palestinians as human beings,’ she added, ‘you will stop the suicide bombers.’”

“Dodin went on to justify violent jihad.  “Islam does teach that you must defend yourself,” she said.  ‘You cannot lie down and allow yourself, your home, your property, your family, and your people to be consistently oppressed.’”

“At the same time, she condemned U.S. strikes against the Taliban and Al-Qaeda in Afghanistan, complaining that the military was ‘just going to hit innocent civilians.’”  (pages 181-182.  See also “Biden Deputy Director Defended Terrorism, Murder of Jews,” by Daniel Greenfield, Frontpage Mag., Nov. 24, 2020.)

Placing Reema Dodin in a decision-making post is a nightmare for everyone who believes that Jewish lives, American lives, and all lives matter.

Alejandro Mayorkas’ appointment raises concerns because he is a board member of HIAS.  HIAS partners with terrorism-financier Islamic Relief; repeatedly sued the Trump administration to try to overturn immigration orders designed to protect the safety of the American public from terrorist infiltration; undermines Israeli repatriation policies regarding illegal Eritrean immigrants; signed (via its leaders) a letter defending and praising Jew-basher Linda Sarsour; and misleadingly claims that it is a “Jewish” immigration organization – when in fact less than one percent (1%) of the refugees HIAS assists are Jewish today.  Mayorkas’ involvement with HIAS contradicts the role of DHS – which is to protect Americans’ safety.

We would love to hear from you! Please fill out this form and we will get in touch with you shortly.
Trending Z
News November 30, 2020
At ZOA Gala Secy Pompeo Gave the Greatest, Most Pro-Israel Speech Ever Delivered by a Public Official
News November 30, 2020
Dershowitz in Arutz 7: NYC’s Temple Emanu-El Silences a Pro-Israel Voice & Promotes an Anti-Israel Voice
Uncategorized November 30, 2020
Jewish Press: Has Deborah Lipstadt Undercut Both Herself and Future Antisemitism Envoys?
News November 30, 2020
NEW YORK POST: Democratic Leaders’ Shocking Silence Over Attacks on Israel by Fellow Dems
Center for Law & Justice
We work to educate the American public and Congress about legal issues in order to advance the interests of Israel and the Jewish people.
We assist American victims of terrorism in vindicating their rights under the law, and seek to hold terrorists and sponsors of terrorism accountable for their actions.
We fight anti-Semitism and anti-Israel bias in the media and on college campuses.
We strive to enforce existing law and also to create new law in order to safeguard the rights of the Jewish people in the United States and Israel.
Our Mission
ZOA STATEMENT
The ZOA speaks out for Israel – in reports, newsletters, and other publications. In speeches in synagogues, churches, and community events, in high schools and colleges from coast to coast. In e-mail action alerts. In op-eds and letters to the editor. In radio and television appearances by ZOA leaders. Always on the front lines of pro-Israel activism, ZOA has made its mark.
Related Articles
OP-ED BY: ZOA Staff ZOA Praises JCRC For Expelling Anti-Israel BDS From Israel Day Parade