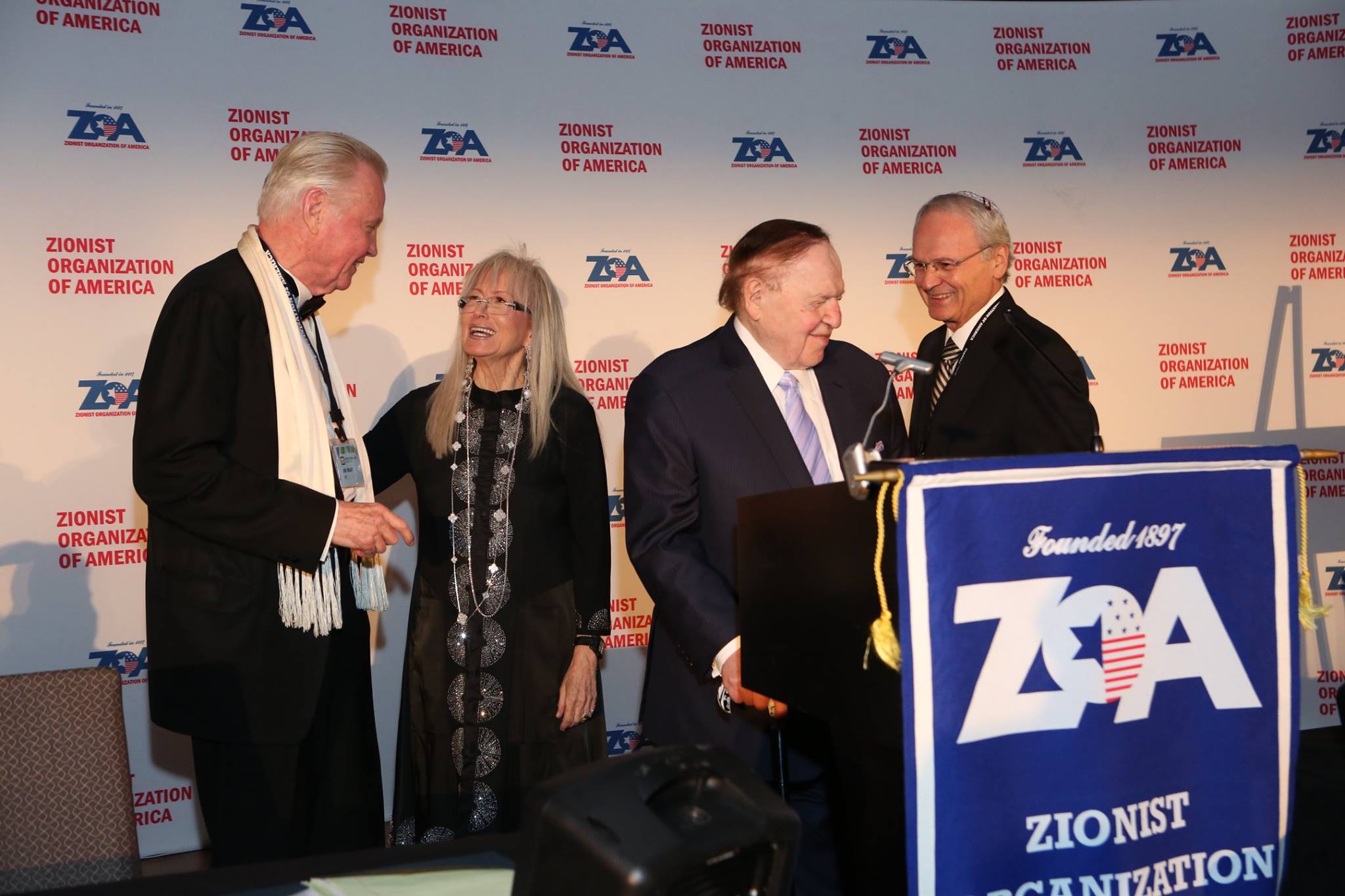 ZOA mourns the passing of a Zionist Jewish giant, Sheldon G. Adelson, Shalom Gedalia Ben.  Every fiber of Sheldon’s physical, spiritual and emotional being was Jewish and Zionist.  Sheldon’s deep love of the Jewish people and the Jewish State of Israel knew no bounds.  He breathed it and lived it. Sheldon was the proudest Jew I ever knew.

Sheldon Adelson also had a great love for America and humanity and the people he shared this earth with.  He especially admired people whom he called “great humanitarians.”  Most people do not know that each year, Sheldon and his wife, physician Dr. Miriam Adelson, funded hundreds of millions of dollars of medical research to fight cancer, heart disease, and other human ailments. His director for medical research (a high school classmate of mine) told me that Sheldon’s and Miri’s devotion to stamping out disease was almost as great as their unbounded love of Israel and the Jewish people. Sheldon and Miri also established the Dr Miri and Sheldon Adelson Medical School in Ariel, Israel. He was a major contributor to Wounded Warriors, our American heroes in the armed forces.

I must add that Sheldon’s love and devotion to MIri and their children was simply extraordinary.  He always praised his wife to me, and whenever his children walked into the room, they were immediately kissed by their father Sheldon.   His family was the apple of his eye.   He would always proudly brag about his children, and his children’s accomplishments, interests and goals.  Despite the life they led, his children were always kind, humble, and modest, and very, very proud of their father Sheldon and their mother Dr Miri Adelson, a great drug addiction expert in her own right.

Once when I asked Sheldon if there was something special he wished for, he said he wished his parents were alive to see what he’s done for Israel and the Jewish people, and for all his charitable causes.  Sheldon told me his father always taught him to be charitable.  Sheldon grew up seeing his father put several coins into a “Pushka” (charity box) every day.   Sheldon asked his father why he was putting money in the pushke, when he himself was poor.  His father said to Sheldon that there is always someone poorer than oneself, and that we must always help others.

Sheldon loved his parents dearly.  When Sheldon received ZOA’s Theodor Herzl Gold Medallion and Miri, the ZOA Louis Brandeis award during our 2009 ZOA gala dinner, Sheldon gave a beautiful speech, recounting his own father’s love for Israel and unfulfilled wish to visit the Jewish people’s eternal homeland.  Sheldon then movingly told us that during Sheldon’s first trip to Israel, Sheldon wore his father’s shoes so his late father could in some sense fulfill his unrealized Zionist dream of walking on the holy land of Eretz Yisrael. Sheldon was very close the the major leaders in Israel. I remember once my wife and I were having dinner at Sheldon and Miri’s home in Israel. There was a knock on the door and it was Benjamin Netanyahu, who was shocked to see me there and said “you know Sheldon too!”

My brother, Dr. Samuel Klein, professor of medicine at Washington University Medical School, was one of Sheldon’s doctors.  A battery of tests that Sam performed showed that Sheldon had a high intelligence capacity.  And he surely did.  Sheldon was a brilliant and visionary thinker.

One of Sheldon’s most important dreams was moving the U.S. Embassy to Jerusalem.   I’ll never forget the day he called me from his car a moment after he left then-President–elect Donald Trump’s office at the Trump Tower in NYC.   Sheldon very excitedly told me that Donald Trump had just promised him he would move the US Embassy to Jerusalem during his term in office.  And he did.   And Sheldon deserves a great deal of credit for that historic achievement.  Thank you Sheldon.

And thank you, Sheldon, for your generous contributions to the ZOA that helped make it possible for ZOA to fight alongside you to move the embassy to Jerusalem, and to fight against antisemitism and Israelophobia. In honor of Sheldon and Miri Adelsons enormous and legendary contributions to the Jewish State, ZOA established the Dr. Miri and Sheldon Adelson Defender of Israel Award given each year to the greatest Zionists in the world.

Indeed, no discussion of Sheldon’s life is complete without mentioning his enormous philanthropy for fighting against anti-Semitism, fighting on campuses against the anti Israel propaganda, combatting lies against Israel and Jews, and making sure that we never forget the horrors of the Holocaust.   A part of his legacy was to insure there would never be another Holocaust.  Sheldon’s wife Miri lost many of her family members in the Holocaust, and was Sheldon’s partner in their commitment to “Never Again” allow such a horror to happen. Miri talked to me about this before she received the American Medal of Freedom for Medical Philanthropy from President Donald Trump.

I and my wife and brother and all of us at the ZOA say with heartfelt love to his wife Miri and to the Adelson children “May you be comforted amongst the mourners of Zion and Jerusalem.”

We would love to hear from you! Please fill out this form and we will get in touch with you shortly.
Trending Z
News January 12, 2021
ZOA Condemns U.S. State Dept. & U.S. Amb. Nides For Siding with Antisemitic, Discriminatory Palestinian & Hamas Terrorists re: the Temple Mount, Violating Jews’ Religious Freedom
News January 12, 2021
ZOA’s Klein JPost Op-Ed: There is Nothing Extreme About Israel’s New Government
Uncategorized January 12, 2021
FLASH: ISRAEL-JORDAN PEACE TREATY (1994) GUARANTEES JEWS ACCESS TO THE TEMPLE MOUNT – LET MY PEOPLE PRAY
Uncategorized January 12, 2021
ZOA Analysis: Most American Rabbis Who Are Boycotting Some Israeli Ministers Are From Extremist Left Wing Groups (J Street; T’ruah; JVP)
Center for Law & Justice
We work to educate the American public and Congress about legal issues in order to advance the interests of Israel and the Jewish people.
We assist American victims of terrorism in vindicating their rights under the law, and seek to hold terrorists and sponsors of terrorism accountable for their actions.
We fight anti-Semitism and anti-Israel bias in the media and on college campuses.
We strive to enforce existing law and also to create new law in order to safeguard the rights of the Jewish people in the United States and Israel.
Our Mission
ZOA STATEMENT
The ZOA speaks out for Israel – in reports, newsletters, and other publications. In speeches in synagogues, churches, and community events, in high schools and colleges from coast to coast. In e-mail action alerts. In op-eds and letters to the editor. In radio and television appearances by ZOA leaders. Always on the front lines of pro-Israel activism, ZOA has made its mark.
Connect with us
Sign up for our Newsletter