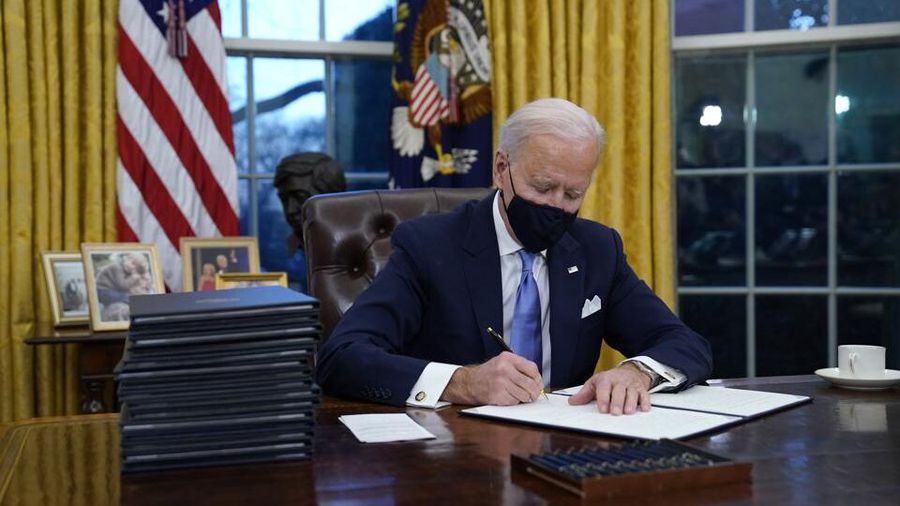 The U.S. Acting Envoy to the United Nations, Ambassador Richard Mills Jr., gave a speech at the UN Security Council yesterday, outlining the Biden administration’s Middle East policies and plans. (See transcript at “Remarks at a UN Security Council Open Debate on the Situation in the Middle East,” Jan. 26, 2021). ZOA praises several positive aspects, and opposes many negative aspects of the Biden administration’s plans, revealed by Mills’ speech. ZOA urges the administration to eliminate the negatives described below:

Positive – No Imposition of an Agreement: Mills stated that “Peace cannot be imposed on either the Israelis or the Palestinians.” ZOA hopes this means that the Biden administration will avoid arm-twisting to try to force Israel to make dangerous agreements or concessions to the terrorist, corrupt Palestinian Authority (PA) dictatorship. The PA dictatorship continues to incite and pay terrorists to murder Jews and Americans and is bent on destroying the Jewish state.

Semi-Positive – Consent and Consultation: Mills called for “active consultation with both sides,” and “active consent of both sides.” ZOA supports this position, yet remains concerned that Mills only referred to “consent” and “consultation,” while never mentioning “direct negotiations.” If the Palestinian Authority still cannot sit at a table with Israel, (as they’ve refused for over 10 years) they cannot be serious about peace.

Negative – Working With the “Quartet”: ZOA is also concerned that Mills stated that he looks forward to working with the “Quartet.” The Quartet consists of the UN, the U.S., the EU, and Russia. Involving the “Quartet,” most of whom are hostile to Israel, is a Palestinian Authority tactic for avoiding direct negotiations with Israel, while using outside entities to obtain concessions that both endanger, and are unfair and unjust to Israel. Involving the Quartet contradicts the premise that “peace cannot be imposed.”

The Quartet’s hostile-to-Israel principles, promulgated at a September 2016 meeting, with John Kerry representing the U.S., include opposing Jewish homes and communities in the lawful and historic Jewish homelands of Judea/Samaria, etc. ZOA called for the Quartet to be disbanded, and has repeatedly condemned the Quartet for its anti-Israel bigotry, failure to identify the Palestinian Arab perpetrators of terrorism, biased calls for “restraint on all sides” when Arab terrorists murder Jews, and more.

Very Negative – Opposition to Jewish Homes/Communities and to Israel Implementing Her Rightful Sovereignty in Judea/Samaria: Amb. Mills stated that the United States will urge Israel to avoid “annexation of territory, settlement activity [and] demolitions.” Mills’ statement, and his use of the loaded, inaccurate term “annexation,” ignore the fact that Israel has the right, guaranteed under binding international law, to implement sovereignty over the lawful, historic Jewish homelands in Judea/Samaria, as the recent U.S. peace deal permitted. Mills’ use of the term “settlement activity” likewise ignores the Jewish people’s humanitarian and legal rights to live in the Jewish homeland. Further, Mills’ complaint about “demolitions” ignores the huge amount of unlawful Palestinian Arab construction designed to seize areas designated for Israel, and the lengthy legal processes that Israel scrupulously follows before occasionally carrying out a demolition of an unlawful Arab tent or building. This policy also wrongly opposes Israel legally using occasional demolition as a deterrent to terrorism and murdering innocent Jews. No terrorism = no demolitions.

Semi-Positive – Urging Avoiding Incitement and Pay-to-Slay (But This Appears to be Just Words, Because the Biden Administration Plans to Restart Funding to the Palestinians): It is of course positive that Amb. Mills stated that the U.S. will “urge” the parties to avoid “incitement to violence, and providing compensation for individuals imprisoned for acts of terrorism.” However, Amb. Mills failed to specify that the PA is the party responsible for incitement to violence in their policies, speeches, schools, sermons, and media — not Israel. Even worse, mere words “urging” the PA to stop inciting and paying terrorists to murder Jews and Americans will be ineffective, as they always have been, because the Biden administration intends to restart U.S. payments to the Palestinian Arabs. U.S. funding will give the PA the wherewithal to increase the PA/PLO’s pay-to-slay payments.

Very Negative – Reinstating U.S. Taxpayer Funding to the Palestinian Arabs and Re-Opening the Illegal PA/PLO Missions: Ambassador Mills emphasized that: “President Biden has been clear in his intent to restore U.S. assistance programs that support economic development and humanitarian aid for the Palestinian people and to take steps to re-open diplomatic missions that were closed by the last U.S. administration.”

As noted above, sending hundreds of millions of dollars to the Palestinian Arabs will enable the PA’s pay-to-slay payments to terrorists to murder Jews and Americans. And sending hundreds of millions of U.S. taxpayer dollars to UNRWA will enable UNRWA’s teaching of hatred of Jews and Israel and to support Hamas. It is wrong for the Biden administration to divert monies to a terrorist dictatorship, which is needed by suffering Americans at home, for such counterproductive purposes.

Moreover, Amb. Mills’ claim that such U.S. funding will merely help the Palestinian “people” and not the Palestinian Authority is utterly fallacious. Money is fungible. U.S. payments will save the PA from having to finance government services to its people, thereby freeing up more money for paying terrorist Arab murderers.

Further, much of this funding would violate the Taylor Force Act.

It would also violate U.S. law to re-open the PLO Mission in Washington, D.C. or anywhere else within U.S. jurisdiction (including in U.S. overseas diplomatic territory).

As Ambassador David Friedman tweeted yesterday evening about the Biden administration’s intention to re-open the PLO/PA missions and restore funding: “‪@DavidM_Friedman: Not so fast guys! PLO mission in DC is against Federal law, Pals still paying terrorists and UNRWA is corrupt and incites hatred of Jews. Please don’t go there!”

Indeed, the Anti-Terrorism Act of 1987 (the “ATA”), Section 1002 (22 U.S.C. §5201.b) provides that “Congress determines that the PLO and its affiliates are a terrorist organization and a threat to the interests of the United States, its allies, and to international law and should not benefit from operating in the United States.” Further, ATA Section 1003 (22 U.S.C. §5202(3)) specifically prohibits the PLO, and its constituents, agents and successors, from establishing or maintaining “an office, headquarters, premises, or other facilities or establishments within the jurisdiction of the United States.”

Past administrations allowed the PLO Mission to operate illegally in the U.S. only so as long as the PA/PLO showed good faith in pursuing negotiations. When a PA dictator violated that understanding by instigating false claims against Israel at the International Criminal Court and refusing to negotiate, President Trump properly closed the PLO Mission. The PLO Mission should remain closed.

Positive – Opposing Anti-Israel UN Resolutions, and Promoting Israel’s UN, etc. Standing: Amb. Mills stated that “the United States will continue its longstanding policy of opposing one-sided resolutions and other actions in international bodies that unfairly single out Israel. The United States will also work to promote Israel’s standing and participation in United Nations bodies and other international organizations.”

ZOA hopes that this statement means that the Biden administration will also oppose the biased, unfounded anti-Israel actions instigated by the PLO/PA at the International Criminal Court and similar actions at the ICJ.

Mixed Bag – Welcoming the Abraham Accords (Positive) – But Pushing for Creating a Palestinian Terror State (Very Negative): Amb. Mills stated that “the Biden Administration welcomes the recent normalization agreements between Israel and UN Member States in the Arab world, as well as Muslim-majority countries. . . . The United States will continue to urge other countries to normalize relations with Israel, and we will look for other opportunities to expand cooperation between erstwhile adversaries. Yet, we recognize that Arab-Israeli normalization is not a substitute for Israeli-Palestinian peace. The conflict between Israelis and Palestinians may not be the major fault line in the Middle East, but its resolution nevertheless would significantly benefit the region as a whole. It is the hope of the United States that normalization can proceed in a way that unlocks new possibilities to advance a two-state solution.”

ZOA welcomes the Biden administration’s statement that it will continue efforts to normalize relations between Israel and Arab nations. However, normalization should remain an independent process, without involving the intransigent Palestinian Arabs. For decades, the Palestinian Arabs held Middle East peace prospects hostage, by rejecting exceedingly generous Israeli offers for a Palestinian Arab state, while insisting that no one else can make peace until a Palestinian state is established. The Biden administration’s intention to revert to pushing for “normalization to proceed in a way that . . . advance[s]” the creation of a Palestinian Arab terror state will thus severely impede peace and prosperity between Israel and her Arab neighbors.

We would love to hear from you! Please fill out this form and we will get in touch with you shortly.
Trending Z
News January 27, 2021
ZOA Condemns U.S. State Dept. & U.S. Amb. Nides For Siding with Antisemitic, Discriminatory Palestinian & Hamas Terrorists re: the Temple Mount, Violating Jews’ Religious Freedom
News January 27, 2021
ZOA’s Klein JPost Op-Ed: There is Nothing Extreme About Israel’s New Government
Uncategorized January 27, 2021
FLASH: ISRAEL-JORDAN PEACE TREATY (1994) GUARANTEES JEWS ACCESS TO THE TEMPLE MOUNT – LET MY PEOPLE PRAY
Uncategorized January 27, 2021
ZOA Analysis: Most American Rabbis Who Are Boycotting Some Israeli Ministers Are From Extremist Left Wing Groups (J Street; T’ruah; JVP)
Center for Law & Justice
We work to educate the American public and Congress about legal issues in order to advance the interests of Israel and the Jewish people.
We assist American victims of terrorism in vindicating their rights under the law, and seek to hold terrorists and sponsors of terrorism accountable for their actions.
We fight anti-Semitism and anti-Israel bias in the media and on college campuses.
We strive to enforce existing law and also to create new law in order to safeguard the rights of the Jewish people in the United States and Israel.
Our Mission
ZOA STATEMENT
The ZOA speaks out for Israel – in reports, newsletters, and other publications. In speeches in synagogues, churches, and community events, in high schools and colleges from coast to coast. In e-mail action alerts. In op-eds and letters to the editor. In radio and television appearances by ZOA leaders. Always on the front lines of pro-Israel activism, ZOA has made its mark.
Related Articles
OP-ED Dershowitz: Forward Article is “Most Despicable Ever in Jewish Media”