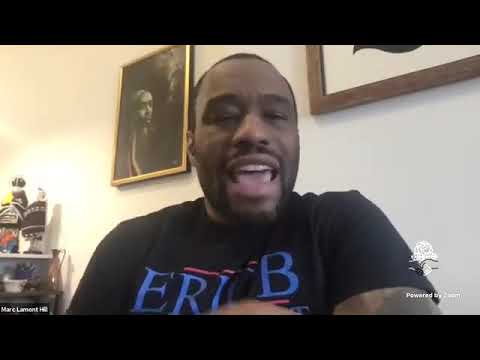 This comes from Marc Lamont Hill, courtesy of an intrepid online researcher of antisemitism. Hill had previously gotten into trouble for combining his CNN gig with support for murdering Jews. But even though CNN parted ways with him, the Democratic Socialists of America (DSA) are always happy to give antisemites a forum, whether it’s Corbyn’s rep or Hill.

In 2014, Hill had claimed on CNN that the kidnapping and murder of three Jewish teens, Naftali Frenkel, Gilad Shaer, and Eyal Yifrah,  one of them an American citizen, wasn’t “terrorism”, but “resistance”.

Earlier this year, Hill had insisted that “occupied people have a legal and moral right to defend themselves” and that the idea that Israel has a “right to exist” is “propaganda”. In May of last year, he had argued that Trump’s “call for Palestine to ‘reject hatred and terrorism’ is offensive.”

“We have allowed this nonviolent thing to become so normative that we’re undermining our own ability to resist in real robust ways,” he complained.

A month after the Pittsburgh massacre, Marc Lamont Hill addressed a UN event in support of the terror colonialists occupying parts of Israel, endorsed BDS, called for the destruction of Israel, and justified the murder of Jews.

“We must recognize the right of an occupied people to defend themselves. We must prioritize peace, but we must not romanticize or fetishize it. We must promote nonviolence at every opportunity but cannot endorse narrow politics that shames Palestinians for resisting,” Hill argued.

Hill professes to have once belonged to an organization known as the Ansaaru Allah Community, an Islamic sect whose doctrines resemble those of the racist, black-supremacist Nation of Islam. On his publicly available Curriculum Vitae, Hill proudly includes a lecture on “The Importance of Ideological Training in the New Millennium,” which he delivered at the Polymathematic University in Pennsylvania – a self-described “revolutionary center for the training and development of professional revolutionaries.” The event was sponsored by the “Poor Righteous Communist Party,” a Maoist group that seeks to develop “an ever glorious Righteous Communism.”

Hill has an extensive history of anti-Israel activism and this fits in neatly with it. But it also defines the underlying agenda for the Black nationalist movement.

This article was originally posted in Frontpagemag here.

We would love to hear from you! Please fill out this form and we will get in touch with you shortly.
Trending Stories
News February 12, 2021
Let Self-Haters Ben Cohen and Jerry Greenfield Choke on Their Woke – Israel National News
Action Alerts February 12, 2021
Zionist Organization of America (ZOA) Action Alert: Boycott Ben & Jerry’s Ice Cream & Products for Boycotting Israel
News February 12, 2021
ZOA Documents Years of Antisemitism at Fairfax, VA Public Schools – Demands Corrective Measures to Protect Jewish Students
Action Alerts February 12, 2021
ZOA ACTION ALERT: Israel In Danger: Zionist Organization of America Members and Others Please Take Action
Our Mission
ZOA STATEMENT
The ZOA speaks out for Israel – in reports, newsletters, and other publications. In speeches in synagogues, churches, and community events, in high schools and colleges from coast to coast. In e-mail action alerts. In op-eds and letters to the editor. In radio and television appearances by ZOA leaders. Always on the front lines of pro-Israel activism, ZOA has made its mark.
Center for Law & Justice
We work to educate the American public and Congress about legal issues in order to advance the interests of Israel and the Jewish people.
We assist American victims of terrorism in vindicating their rights under the law, and seek to hold terrorists and sponsors of terrorism accountable for their actions.
We fight anti-Semitism and anti-Israel bias in the media and on college campuses.
We strive to enforce existing law and also to create new law in order to safeguard the rights of the Jewish people in the United States and Israel.
Related Articles
OP-ED BY: Morton A. Klein, President, ZOA, & Elizabeth Berney, Esq., ZOA Special Projects Director JNS: Trump Deserves Praise for Protecting Americans and Israelis by Killing Terror Leader

U.S. President Donald Trump and the American military and intelligence services should be praised for protecting American and Israeli lives by killing the head of the U.S.-designated Foreign Terrorist Organization (FTO) Islamic Revolutionary Guard Corps (IRGC) Quds Force and the international leader of Hezbollah, arch-terrorist Qassem Soleimani; along with the commander of the Iranian-backed Iraqi FTO […]