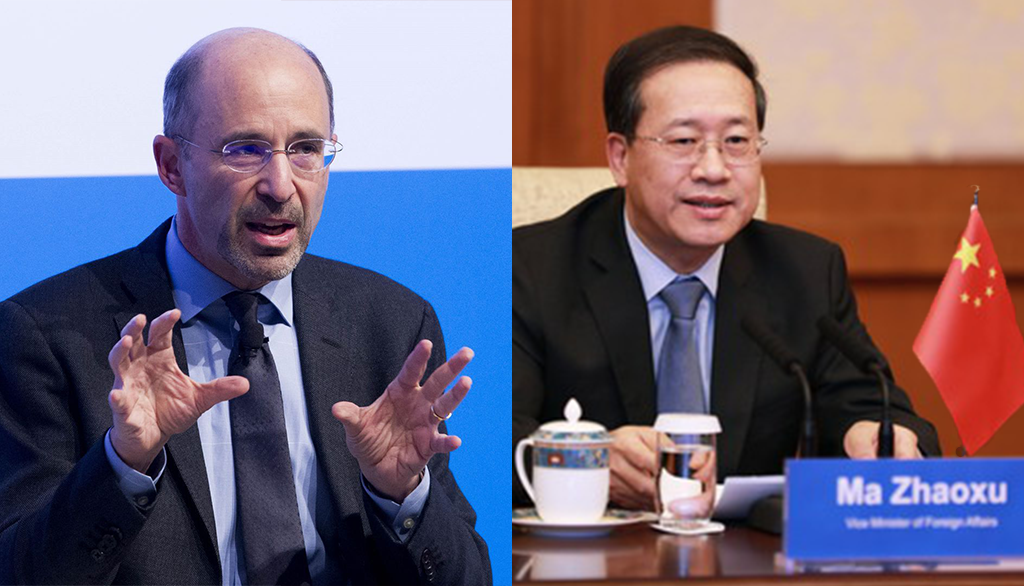 The ZOA urges and requests that the U.S. State Department provide transparency about the content of the secret conversations that Special Envoy to the Islamic Republic of Iran Robert Malley initiated and held with communist Chinese Vice Foreign Minister Ma Zhaoxu about the Iran nuclear issue. There is a real possibility that these secret conversations are undermining U.S. interests in maintaining strong sanctions on Iran, or are setting the stage for other types of appeasement of Iran.

The fact that these conversations occurred came to light because China’s Ministry of Foreign Affairs announced: “On February 10, 2021, Vice Foreign Minister Ma Zhaoxu had a phone conversation with U.S. Special Envoy for Iran Robert Malley at the latter’s request, and the two sides had an in-depth exchange of views on the Iranian nuclear issue.”

The U.S. State Department’s refusal to disclose the substantive content of Malley’s calls raises growing concerns among Iran watchers (including ZOA) that these calls may signal a Biden administration attempt to use China to circumvent existing sanctions on Iran, and to provide Iran with unwarranted de facto sanctions relief. This would undermine U.S. leverage to obtain a better Iran deal, and signal that the administration plans to use secret appeasement of Iran to return to the catastrophic 2015 Iran deal (the JCPOA). The JCPOA gave Iran a route to a nuclear bomb, enriched Iran with billions of dollars of sanctions relief, enabled Iran to expand its terror and military activities, and has woefully inadequate, limited inspections.

As the news service Axios says, the bottom line is: “As long as China gives Iran an economic lifeline, it will be easier for Iran to withstand Western pressure.” (“Biden’s Iran Envoy Rob Malley Quietly Reaches Out to China,” by Bethany Allen-Ebrahimian, Axios, Feb. 16, 2021.)

Malley’s meetings with China appear to violate the official Biden administration position that it will not conduct talks with Iran until Iran returns to the JCPOA’s limits on Iran’s nuclear development. As the Washington Free Beacon said: “Malley’s overtures to China on the Iran portfolio appear to be at odds with Secretary of State Anthony Blinken’s repeated promises to not pursue diplomacy with Tehran until it rolls back its nuclear work and proves it is in compliance with the restrictions placed on its program as part of the agreement. The State Department’s silence on Malley’s meeting could be an indication the Biden administration’s public statements on the deal are at odds with its private diplomacy on the matter.” (“State Dept Refuses to Explain Iran Envoy’s Talks with China,” by Adam Kredo, Washington Free Beacon, Feb. 2021.)

Moreover, the ZOA and others are concerned about Malley having any role in Iran dealings and in the Biden administration, in light of Malley’s extreme hostility to Israel, sympathy for the Iranian regime, contacts with Hamas, and statements favoring appeasement of Iran. (“ZOA Opposes Robert Malley Serving As Special Envoy on Iran or Any Position,” Jan. 24, 2021. See also “Biden’s First Foreign Policy Blunder Could Be on Iran,” by Eli Lake, Bloomberg, Jan. 21, 2021.)

Due to the real possibility that Malley’s secret conversations are undermining U.S. interests in maintaining strong sanctions on Iran, or involve additional appeasement of Iran, ZOA urges prompt transparency, and discontinuation of these underhanded contacts.

We would love to hear from you! Please fill out this form and we will get in touch with you shortly.
Trending Z
Uncategorized February 18, 2021
ZOA Analysis: Most American Rabbis Who Are Boycotting Some Israeli Ministers Are From Extremist Left Wing Groups (J Street; T’ruah; JVP)
Uncategorized February 18, 2021
ZOA: Israel’s Reasonable Judicial Reform Proposals Are Good for Democracy, the Rule of Law and the Economy
Uncategorized February 18, 2021
Israel’s “Right of Return” Grandparent Clause is De-Judaizing the Jewish State – Eliminate It
News February 18, 2021
ZOA is Disappointed, Offended and Frightened by 211 U.S. House Votes Supporting Jew-Hating, Israel-Hating Rep. Ilhan Omar
Center for Law & Justice
We work to educate the American public and Congress about legal issues in order to advance the interests of Israel and the Jewish people.
We assist American victims of terrorism in vindicating their rights under the law, and seek to hold terrorists and sponsors of terrorism accountable for their actions.
We fight anti-Semitism and anti-Israel bias in the media and on college campuses.
We strive to enforce existing law and also to create new law in order to safeguard the rights of the Jewish people in the United States and Israel.
Our Mission
ZOA STATEMENT
The ZOA speaks out for Israel – in reports, newsletters, and other publications. In speeches in synagogues, churches, and community events, in high schools and colleges from coast to coast. In e-mail action alerts. In op-eds and letters to the editor. In radio and television appearances by ZOA leaders. Always on the front lines of pro-Israel activism, ZOA has made its mark.
Related Articles
OP-ED BY: ZOA Staff ZOA Praises JCRC For Expelling Anti-Israel BDS From Israel Day Parade