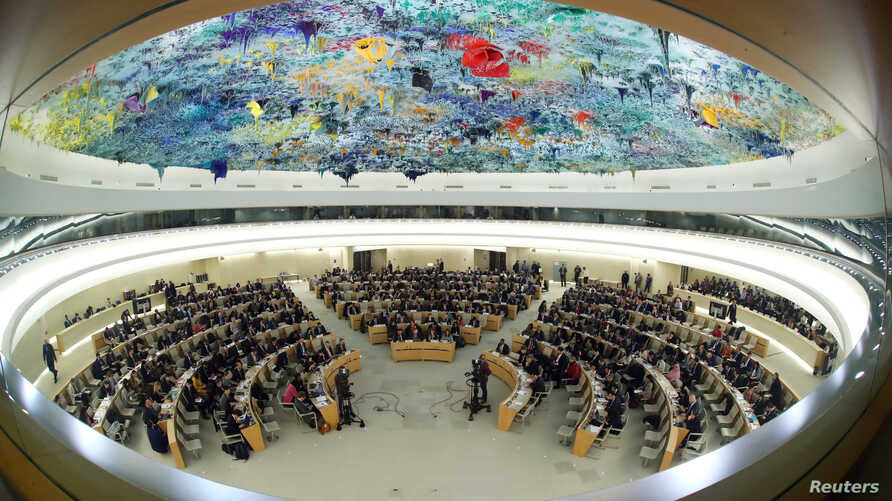 The Biden administration’s morally reprehensible decision to re-engage in the antisemitic United Nations Human Rights Council (UNHRC) is turning into a disaster. When U.S. Secretary of State Antony Blinken announced the administration’s decision to re-engage with the UNHRC in early February, Blinken sought to justify re-engagement as allowing the U.S. to reform the UNHRC, “including [the UNHRC’s] disproportionate focus on Israel.” But instead of using U.S. “re-engagement” to try to stop the UNHRC from constantly bashing Israel (and ignoring real human rights abusers), the U.S. has now led a harmful UNHRC joint statement citing the shockingly vicious anti-Israel 2001 Durban racism conference as a favorable precedent.

On March 19, 2021, U.S. Acting Assistant Secretary of State for Democracy, Human Rights and Labor Lisa Peterson announced that “the United States is proud to have led” a UNHRC “Joint Statement on Racism” that “recalled” (UN-speak for praising as precedent) “the twentieth anniversary of the adoption of the [2001] Durban Declaration and Program of Action [the “DPPA”].”

In addition, the UNHRC’s High Commissioner issued a statement on February 22, 2021 praising and demanding implementation of the Durban DDPA, and praising so-called “civil society” organizations that have “stood up” for the DDPA.

In fact, the 2001 UN “World Conference Against Racism, Racial Discrimination, Xenophobia and Related Intolerance” (WCAR) in Durban, South Africa was such a vicious antisemitic, anti-Israel (and anti-U.S.) hate-fest that the U.S. and Israeli delegations withdrew from Durban in the midst of the conference. Then-U.S. Secretary of State Colin Powell noted, in his statement withdrawing from the Durban WCAR, that: “you do not combat racism by conferences that produce declarations containing hateful language, some of which is a throwback to the days of ‘Zionism equals racism;’ or supports the idea that we have made too much of the Holocaust; or suggests that apartheid exists in Israel; or that singles out only one country in the world–Israel–for censure and abuse.”

At the Durban WCAR conference, copies of the antisemitic conspiracy theory, The Protocols of the Elders of Zion, were sold; anti-Israel protesters jeered participants and chanted “Zionism is racism, Israel is apartheid,” and “You have Palestinian blood on your hands”; and fliers depicted Hitler asking “What if I had won?” with the answer “There would be NO Israel and NO Palestinian bloodshed.” Jewish leader Anne Bayefsky feared for the safety of Jews there, and reported that Durban’s Jewish Center had to close due to threats of violence.

The Durban DDPA falsely characterized Israel as a “foreign occupier” of her own land (“We are concerned about the plight of the Palestinian people under foreign occupation.”) and called for establishing an independent Palestinian state on Israel’s land (which would of course be a terror state).

In addition, the “Durban–WCAR NGO Forum Declaration,” falsely accused Israel of systematically perpetrating racist crimes, war crimes, ethnic cleansing, genocide, torture, deliberate impoverishment, state terrorism, colonialism, denationalization, and alien domination and subjugation of “indigenous” Palestinian Arabs – and much more. (The Durban NGO Declaration’s false anti-Israel condemnations went on and on.) The Durban NGO Declaration also falsely declared that “the West Bank, including Jerusalem and Gaza,” were “occupied Palestinian territories”; that Israel was “a racist, apartheid state”; that Israel’s “brand of apartheid” was “a crime against humanity”; and condemned “the ethnicity of the Israeli state as a Jewish state.” The same document also declared that Arabs were victims of antisemitism, and condemned the U.S. weapons blockade of Cuba.

We would love to hear from you! Please fill out this form and we will get in touch with you shortly.
Trending Stories
Featured March 30, 2021
ZOA Opposes Bringing in ISIS-Infiltrated Syrian Refugees
Action Alerts March 30, 2021
ZOA ACTION ALERT: Israel In Danger: Zionist Organization of America Members and Others Please Take Action
News March 30, 2021
ZOA Appalled; Biden Admin Led UNHRC “Racism” Statement Promoting Anti-Israel Durban Conference
News March 30, 2021
ZOA Appalled: Opposes Samantha Power to Head United States Agency for International Development (USAID) and Sit on National Security Council
Our Mission
ZOA STATEMENT
The ZOA speaks out for Israel – in reports, newsletters, and other publications. In speeches in synagogues, churches, and community events, in high schools and colleges from coast to coast. In e-mail action alerts. In op-eds and letters to the editor. In radio and television appearances by ZOA leaders. Always on the front lines of pro-Israel activism, ZOA has made its mark.
Center for Law & Justice
We work to educate the American public and Congress about legal issues in order to advance the interests of Israel and the Jewish people.
We assist American victims of terrorism in vindicating their rights under the law, and seek to hold terrorists and sponsors of terrorism accountable for their actions.
We fight anti-Semitism and anti-Israel bias in the media and on college campuses.
We strive to enforce existing law and also to create new law in order to safeguard the rights of the Jewish people in the United States and Israel.
Related Articles
OP-ED Iran Sanctions Relief Will Provide Billions To Fund/Arm Terrorists