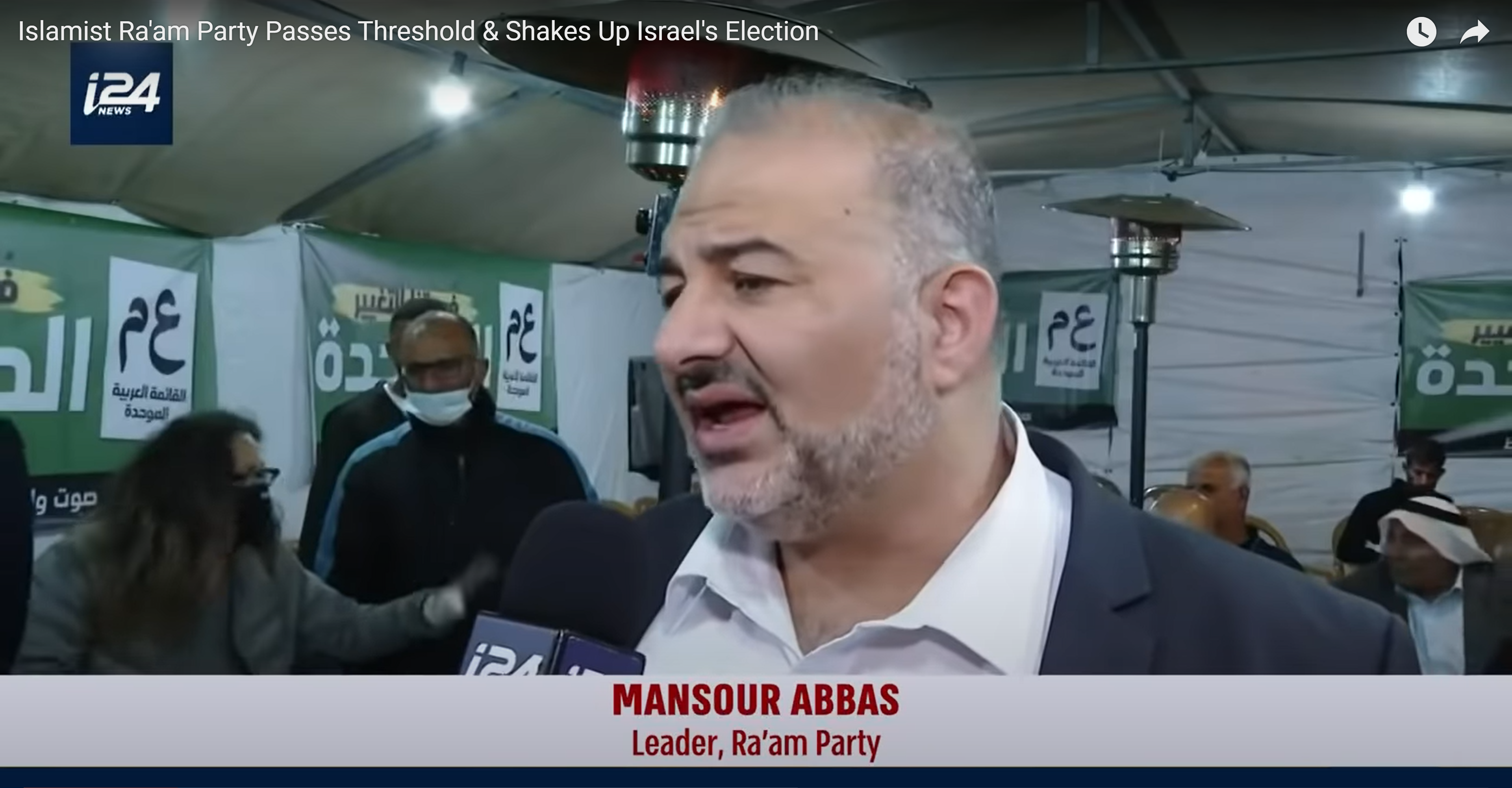 ZOA calls upon all Israeli parties, Knesset members, and leaders to stand firmly against making any coalition with the anti-Israel Ra’am Islamic Movement party and Ra’am’s four members of Knesset (MKs) elected on March 23: Ra’am Chairman Mansour Abbas; Walid Taha; Said al-Harumi; and Iman Khatib-Yasin. Negotiating with Ra’am only legitimizes their abhorrent anti-Israel beliefs and policies. (ZOA would have no problem with Israeli parties negotiating with any Israeli Arab party which is clearly loyal to the Jewish State of Israel and hostile to Israel’s enemies.)

In his Arabic speech, Abbas called Israel’s re-establishment and very existence the “Nakba” (catastrophe); praised Arabs who maintain a separate Palestinian Arab identity as opposed to an Israeli identity; and vowed to maximize Arab power, with the goal of making “Palestine” a reality and praising a future “Palestine” as the “diamond in the crown of the Arab Islamic community.” Why is he, a potential member of the Israeli Knesset, profusely praising and imagining the greatness of a potential foreign entity which is a dictatorship and enemy of Israel, which refuses to negotiate with and incites violence against Israel, and pays Arabs to murder Jews? Abbas stated:

“We stand before our people and the Arab Palestinian society modestly, and bow our heads in honor and glory of this precious society – which lived the Nakba, clung to this land and maintained its identity. Its status is in our hearts and in the hearts of the entire nation. Thanks to them, Palestine will not remain a mere memory.”

“The good community left on this land – for me and for us we continue the journey. They are the conscience that guides us and they are the roots. These are pegs planted in our lands, and our goal is to continue to strengthen this bond and power, to maximize this power, until this nation becomes the diamond in the crown of the Arab Islamic community.”

ZOA urges Israel’s leaders to remember how PLO terrorist Yasser Arafat spoke about peace in English in 1993 to obtain the benefits of the Oslo Accords, while at the same time, he spoke about destroying Israel in Arabic. Arafat then incited and planned the intifadas—terror wars, in which Arab terrorists maimed or murdered 10,000 innocent Jews. The speech in Arabic reveals an Arab leader’s real goals. Ra’am Chairman Abbas’ goal is the Jewish state’s elimination. His words are not the words of a loyal Israeli citizen.

Further, Ra’am MK Said al-Harumi specifically condemned the peace deal for “perpetuating Jerusalem’s status as the capital of Israel and continuing the occupation in those sites sacred to Muslims and Christians.”

“The State of Israel was born of the racist, occupying Zionist project; iniquitous Western and British imperialism; and the debasement and feebleness of the Arab and Islamic [nations]. We do not absolve ourselves, the Palestinian people, of our responsibility and our failure to confront this project.”

“We all are [united as] one hand until the occupation ends and a Palestinian state is established in the West Bank and the Gaza Strip and in noble Jerusalem; when the expelled and displaced return to their homes and to their homeland.”

“You have a warning in the Frank apostates [the Crusaders] who forcefully ravished the land for nearly two centuries, until they were defeated by Salah al-Din al-Ayyubi and his soldiers.”

(“Ra’am’s Guiding Charter Backs Palestinian Right of Return, Calls Zionism Racist: While Mansour Abbas is Being Wooed Amid Post-Election Deadlock, the Southern Islamic Movement, of Which his Party is the Political Wing, Takes Positions Most Jewish Israelis Abhor,” by Aaron Boxerman, Times of Israel, Apr. 4, 2021.)

Ra’am’s extreme ideology and statements, defaming, and seeking elimination of the Jewish state make Ra’am unfit for a governing Israeli coalition. ZOA thus urges all Israeli parties to avoid any coalition that relies upon Ra’am.

An overwhelming majority of the Israeli electorate voted for right-leaning and/or Jewish religious parties. There are thus surely ways to form a stable government that reflects the will of the Israeli public, without relying on an Arab party that opposes the Jewish state’s existence.

We would love to hear from you! Please fill out this form and we will get in touch with you shortly.
Trending Z
News April 7, 2021
New Biden Nominees Opposed Abraham Accords & Involved in Israeli Election Interference
Uncategorized April 7, 2021
ZOA Letter to DOJ & FBI on New “Mapping Project” Antisemitic Threat by ZOA Pres. Morton Klein, Dir. of Research/Special Projects Liz Berney, Esq., Dir. Center for Law & Justice Susan Tuchman, Esq.
Op-Ed April 7, 2021
ZOA’s Mort Klein JPost Op-Ed: BDS Mapping Project Targets Every Jew, Including Left Wing, Israelophobic Jews
News April 7, 2021
U.S. Senators Criticize Tamara Wittes, Biden Nominee’s Anti-Israel Bias ― Jewish Groups are Deafeningly Silent
Center for Law & Justice
We work to educate the American public and Congress about legal issues in order to advance the interests of Israel and the Jewish people.
We assist American victims of terrorism in vindicating their rights under the law, and seek to hold terrorists and sponsors of terrorism accountable for their actions.
We fight anti-Semitism and anti-Israel bias in the media and on college campuses.
We strive to enforce existing law and also to create new law in order to safeguard the rights of the Jewish people in the United States and Israel.
Our Mission
ZOA STATEMENT
The ZOA speaks out for Israel – in reports, newsletters, and other publications. In speeches in synagogues, churches, and community events, in high schools and colleges from coast to coast. In e-mail action alerts. In op-eds and letters to the editor. In radio and television appearances by ZOA leaders. Always on the front lines of pro-Israel activism, ZOA has made its mark.
Related Articles
OP-ED ZOA Mourns Passing of Ariel Founder & Visionary, Ron Nachman