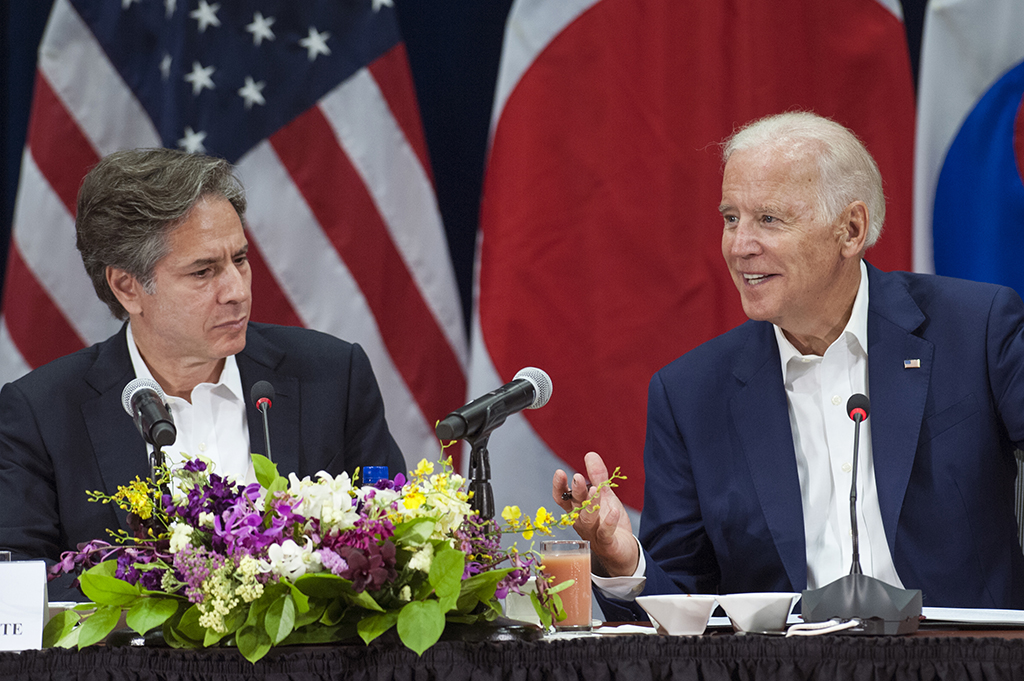 ZOA strongly opposes any removal of any nuclear sanctions on Iran – but that appears to be the focus of negotiations currently underway with the terrorist Islamic Republic of Iran. (President Biden’s numerous hostile-to-Israel appointments are having a troubling and dangerous impact on Iran policy and on Palestinian Arab policy.) The aim of the Mullahs of Iran is to quickly return to the catastrophic and dangerous Iran deal, also known as the JCPOA (Joint Comprehensive Plan of Action). There is no benefit to the national interests of the United States from returning to this deal in any case, and without significant Iranian concessions about removing the short expiration date of the agreement, effective inspections of secret and military sites, and covering the acquisition of intercontinental ballistic missiles and other weapons – the entire exercise is almost certainly making armed conflict more likely.

“The JCPOA shockingly guarantees a legal and easy path to Iran developing nuclear weapons, and is a frightening disaster for both American and Israeli vital interests as Iran continues to publicly proclaim “death to America and Israel.” We must not again commit to the catastrophic JCPOA. We need a new, much stronger deal with the Iranians. If reports from the negotiations are true, the U. S. negotiators led by the pro-Iran, pro-Hamas, anti-Israel Rob Malley are making fools out of the Biden administration officials who have reassured the American people that we would not capitulate to Iranian demands and end sanctions, especially while Iran continues to violate the agreement. Especially on Holocaust Remembrance Day, we urge President Biden to refuse to dangerously appease Iran in these negotiations and stand up for the vital interests of the United States and Israel.”

Secretary of State Blinken and President Biden have repeatedly reassured the American people that they would only return to the Iran deal after it’s strengthened and Iran stopped all activities in clear violation of the deal. The Iranians admit to having violated the deal by having more enriched uranium than the JCPOA permits, having started using advanced centrifuges, and having restricted the inspections that are required. None of the signers of the JCPOA have instituted any additional sanctions on Iran for these admitted violations. In addition, the covert Israeli secret raid on their nuclear archives in 2018 proved that Iran had been engaged in undeclared secret nuclear weapons research continuously since 2003. Nuclear residue found to be present in the warehouse shows that unannounced enrichment was taking place at secret, undeclared sites.

We know Iran has been cheating, even though the JCPOA will allow them to breakout to having nuclear weapons when the deal soon sunsets, even without any cheating. Amazingly, the Biden administration and our European ‘allies’ are so interested in returning financial advantages to Iran that they are overlooking actual cheating. Satellite images released in the last month show a new secret ballistic missile launch facility in central Iran, near the city of Isfahan. Incredibly, this appears to have had no impact on the Biden administration’s eagerness to reenter a grossly flawed nuclear agreement with Iran.

The U. S. Congress is not powerless in this matter. The law passed in 2015 requires that the removal of sanctions be approved by Congress. Any agreement made with another country must be ratified by the Senate—according to the Constitution—to be considered binding on the United States. Even under the JCPOA, we were entitled to have sanctions on Iran because of their abysmal human rights record, and to punish Iran for their continuing terrorist activity, and to stop weapons proliferation. Shamefully, the Obama administration removed sanctions as “goodwill gestures” in these areas, and there is every reason to believe President Biden is seeking to repeat that dangerous action. Unfortunately, all of the senior appointees in the State Department are veterans of the Obama administration, and none appear to be willing to admit the mistakes that we made in 2015 will be even more damaging to national security today.

Silence by pro-Israel and pro-American lawmakers in the face of this apparent capitulation dare not be tolerated. ZOA stands for both American and Israeli security and says no to sanctions relief and policies and actions which may well lead to an Islamic Republic of Iran nuclear holocaust.

We would love to hear from you! Please fill out this form and we will get in touch with you shortly.
Trending Z
News April 9, 2021
ZOA Condemns U.S. State Dept. & U.S. Amb. Nides For Siding with Antisemitic, Discriminatory Palestinian & Hamas Terrorists re: the Temple Mount, Violating Jews’ Religious Freedom
News April 9, 2021
ZOA’s Klein JPost Op-Ed: There is Nothing Extreme About Israel’s New Government
Uncategorized April 9, 2021
FLASH: ISRAEL-JORDAN PEACE TREATY (1994) GUARANTEES JEWS ACCESS TO THE TEMPLE MOUNT – LET MY PEOPLE PRAY
Uncategorized April 9, 2021
ZOA Analysis: Most American Rabbis Who Are Boycotting Some Israeli Ministers Are From Extremist Left Wing Groups (J Street; T’ruah; JVP)
Center for Law & Justice
We work to educate the American public and Congress about legal issues in order to advance the interests of Israel and the Jewish people.
We assist American victims of terrorism in vindicating their rights under the law, and seek to hold terrorists and sponsors of terrorism accountable for their actions.
We fight anti-Semitism and anti-Israel bias in the media and on college campuses.
We strive to enforce existing law and also to create new law in order to safeguard the rights of the Jewish people in the United States and Israel.
Our Mission
ZOA STATEMENT
The ZOA speaks out for Israel – in reports, newsletters, and other publications. In speeches in synagogues, churches, and community events, in high schools and colleges from coast to coast. In e-mail action alerts. In op-eds and letters to the editor. In radio and television appearances by ZOA leaders. Always on the front lines of pro-Israel activism, ZOA has made its mark.
Related Articles
OP-ED Iran Sanctions Relief Will Provide Billions To Fund/Arm Terrorists