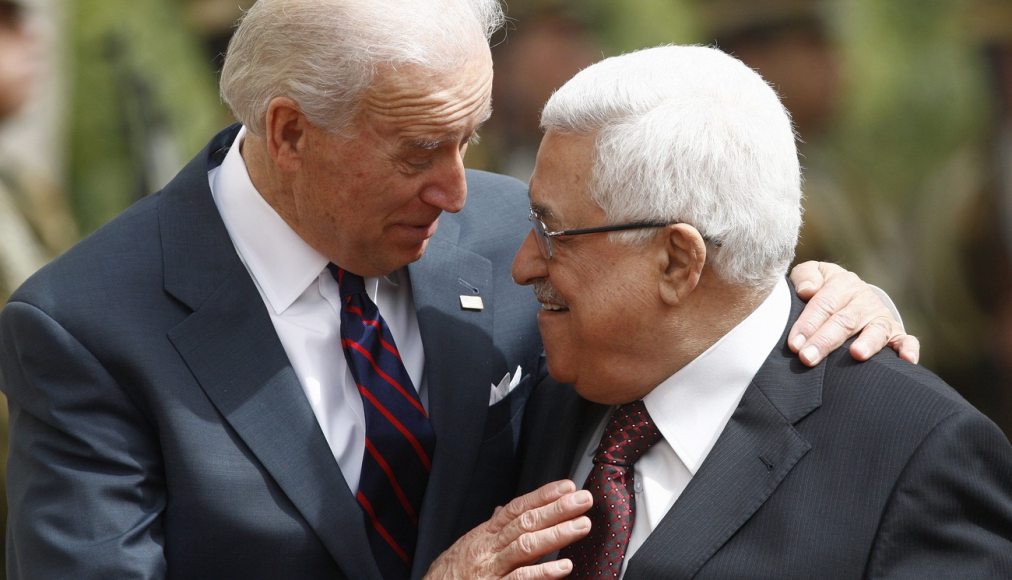 The ZOA urges President Biden to not get closer with the PA and Mahmoud Abbas terrorists or to provide U.S. taxpayer funds to this terrorist regime. At a minimum, Biden should place the following pre-conditions on any funding or strengthening of that relationship:

First, Abbas needs to abrogate the Nazi-like Palestinian law that pays Arabs a lifetime pension if they murder a Jew or an American. The greater the number of Jews or Americans murdered, the larger the pension. The PA’s “pay-to-slay” program further stipulates that if the Arab murderer is killed because of his actions, his family will receive the pension. Furthermore, the pension is at a rate of five times the size of the average Palestinian’s income.

In addition, President Biden should not provide funds to or upgrade the relationship with the Palestinian Authority until the PA rescinds the names of schools, streets, sports teams, sports tournaments, and children’s camps named after Jew-killers; halts printing posters honoring terrorists which are prominently displayed in Palestinian schools and colleges and elsewhere; and stops promoting hatred and violence against Jews in Palestinian Authority schools, textbooks, speeches, sermons, and media.ZOA likewise urges President Biden to not provide substantial U.S. taxpayer dollars to rebuild Hamas-run Gaza. At a minimum, ZOA strongly urges that Biden insist upon anti-terror pre-conditions prior to providing any such aid:

First, Hamas must abrogate the clauses in the Hamas Charter that call for violent jihad, murdering every Jew and obliterating Israel. Second, Hamas must destroy all 10,000 of its remaining Iranian-provided rockets. Third, Hamas must dismantle its hundreds of miles of terror tunnels designed to facilitate attacks on Israel and smuggle more rockets into Gaza. (Under pressure from Biden, Israel agreed to a ceasefire after only destroying approximately 62 miles of the terror tunnels.) Fourth, Hamas and Hamas-controlled UNRWA must stop promoting hatred and killing of Jews in their schools, media, and officials’ speeches and sermons.

If these reasonable conditions are not demanded and met, it will be impossible to establish peace and an end to Palestinian Arab terrorism.  Another Fatah/Arab/Islamic/Hamas/Iranian war against Israel will surely occur in the near future.

If the Biden administration does not insist on the above anti-terror conditions, Biden’s planned rewards to the Hamas and PA terror regimes will sooner or later produce new rounds of Hamas and PA terror attacks on the Jewish State of Israel. Hamas launched over 4,300 rockets attempting to massacre thousands of Israeli Jews. Hamas will attack again and again, if the U.S. taxpayers simply reconstruct their terrorist enclave every time. Biden’s unconditional plans give a green light to Hamas to launch thousands of rockets at Israeli civilians once again, and encourage the PA and Abbas to continue inciting and paying Arab terrorists and Israeli Arab mobs to murder and injure Israeli Jews.

As JNS Editor-in-Chief Jonathan Tobin wrote, reconstructing Gaza “will reward Hamas terrorism and flash a green light for more wars aimed at destroying Israel.” (“If the U.S. Wants to be Humane, it Won’t ‘Rebuild’ Gaza,” by Jonathan Tobin, JNS, May 24, 2021.)

Moreover, the applicable UN agency, UNRWA, through which the U.S. wishes to facilitate funds, has a long, sordid history of being staffed by Hamas, teaching hatred of Jews and Israel; assisting Hamas’ terror efforts; storing Hamas rockets and weaponry in UNRWA schools; allowing Hamas to launch rockets from UNRWA hospitals and schools; using UNRWA schools as entrances for terror tunnels; recruiting for Hamas at every UNRWA school; allowing Hamas to use children as terror shields; and producing Hamas terror masterminds. (See, e.g., “How UNRWA Supports Hamas,” by Asaf Romirowsky, Jewish Policy Center, Fall 2007; “UN Agency Handed Rockets Back to Hamas,” TOI, July 20, 2014; “Israel’s UN Envoy Blasts Discovery of Gaza Tunnel Under UNRWA School,” TOI, Oct. 29, 2017; and “What’s Wrong With UNRWA and Why it Must be Reformed,” UN Watch, Jan. 21, 2018.)

We would love to hear from you! Please fill out this form and we will get in touch with you shortly.
Trending Stories
Featured May 25, 2021
ZOA Opposes Bringing in ISIS-Infiltrated Syrian Refugees
Action Alerts May 25, 2021
ZOA ACTION ALERT: Israel In Danger: Zionist Organization of America Members and Others Please Take Action
News May 25, 2021
ZOA Appalled; Biden Admin Led UNHRC “Racism” Statement Promoting Anti-Israel Durban Conference
News May 25, 2021
ZOA Appalled: Opposes Samantha Power to Head United States Agency for International Development (USAID) and Sit on National Security Council
Our Mission
ZOA STATEMENT
The ZOA speaks out for Israel – in reports, newsletters, and other publications. In speeches in synagogues, churches, and community events, in high schools and colleges from coast to coast. In e-mail action alerts. In op-eds and letters to the editor. In radio and television appearances by ZOA leaders. Always on the front lines of pro-Israel activism, ZOA has made its mark.
Center for Law & Justice
We work to educate the American public and Congress about legal issues in order to advance the interests of Israel and the Jewish people.
We assist American victims of terrorism in vindicating their rights under the law, and seek to hold terrorists and sponsors of terrorism accountable for their actions.
We fight anti-Semitism and anti-Israel bias in the media and on college campuses.
We strive to enforce existing law and also to create new law in order to safeguard the rights of the Jewish people in the United States and Israel.
Related Articles
OP-ED ZOA Mourns Passing of Ariel Founder & Visionary, Ron Nachman