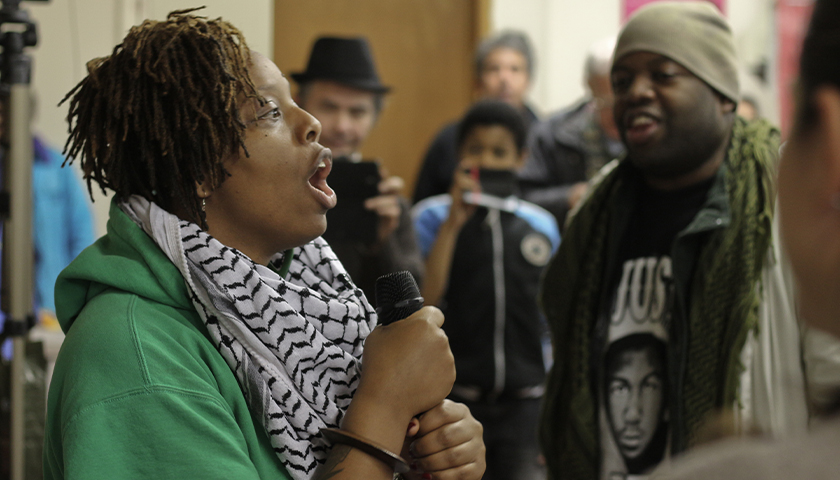 During an interview about the frightening recent spike in antisemitic assaults throughout the U.S. and the world, top officials of the 52-member Conference of Presidents of Major American Jewish Organizations (CoP) acknowledged and condemned the horrific antisemitism and anti-Israelism emanating from the left and the Black Lives Matter organization (BLM). (See “U.S. Antisemitism Far Worse Than Reported, Say Conference of Presidents Leaders,” by Lazar Berman, Times of Israel, May 31, 2021.)

CoP CEO William Daroff explained that “Black Lives Matter and others have been turned through intersectionality into anti-Israel movements, which have strong anti-Semitic components.”

Similarly, CoP Chair Dianne Lob confirmed that “much of the recent rise in antisemitism comes from the discourse on the left wing of the US political spectrum,” and stated: “I think we can’t underestimate the intersectionality piece. The language is very parallel to the Black Lives Matter language.” CoP Vice Chair Malcolm Hoenlein agreed with Chairperson Lob’s statements.

The CoP leaders have joined ZOA and ZOA President Morton Klein in criticizing and warning about the frightening Jew-hatred and Israel-hatred spread by the BLM organization, its parent organization Movement 4 Black Lives (M4BL), and their leaders. ZOA documented BLM’s antisemitic libels defaming Israel and promotion of antisemitic anti-Israel boycotts, divestment, and sanctions (BDS) in the still-existing BLM/M4BL platform, social media, anti-Israel “days of rage,” and in attacks such as the pogrom in Los Angeles. See ZOA’s The BLM Organization Files.

“Until and unless Black Lives Matter removes this blood libel [accusing Israel of committing genocide] from its platform and renounces it, no decent person—black, white or of any other racial or ethnic background—should have anything to do with it. . . . To give Black Lives Matter a pass on its anti-Jewish bigotry would be to engage in racism. Black antisemitism is as inexcusable as white antisemitism or white racism. There can be no double standard when it comes to bigotry.” (“Alan Dershowitz: Black Lives Matter Must Rescind Its Anti-Israel Declaration,” Algemeiner, Aug. 16, 2016.)

BLM-Los Angeles leaders incited the BLM pogrom against Jews over Shavuot weekend 2020, in which BLM rioters burned and looted Jewish stores and businesses, carried Hezbollah signs, and burned and defaced synagogues and Jewish schools, while screaming “Kill the Jews.”

At BLM-Palestinian joint “days of rage” last July, BLM and Palestinian marchers called for Israel’s destruction “from the river to the sea” in multiple U.S. cities, and falsely chanted: “Israel, we know you, you murder children, too.”

Notably, ZOA and Morton Klein have always made it clear that we oppose anti-Black racism, and that we agree with the slogan “Black lives matter”—just as all lives matter. ZOA and Mort Klein moreover have a long history of fighting for Black civil rights. We simply condemn the BLM organization’s Jew-hatred, Israel-hatred, promotion of BDS, Marxism, and bigoted policies.

Now that the CoP’s leaders have acknowledged that BLM is an antisemitic, anti-Israel movement, ZOA urges the CoP’s leaders to insist that the 16 CoP organizational leaders that maligned ZOA and Morton Klein for essentially saying the very same thing must finally apologize to ZOA and Mort Klein. (See “ZOA Demands Apology from URJ’s Rick Jacobs & Others for Denouncing ZOA’s Condemnation of BLM Org’s Antisemitic Israel-Hating Platform,” June 29, 2020.) One such leader previously apologized to Mr. Klein.

The remaining leaders who need to apologize to ZOA and Morton Klein are:

The most recent increase in BLM’s anti-Israel, antisemitic actions again show that it’s time for all in the Jewish community and all decent Americans to come together to honestly face the BLM organization’s threats to our safety here in the U.S. and to the Jewish homeland. For instance:

U.S. Jews need to unite and publicly condemn the Black Lives Matter organization and do all we can to address this dangerous threat.

We would love to hear from you! Please fill out this form and we will get in touch with you shortly.
Trending Z
Uncategorized June 3, 2021
ZOA Analysis: Most American Rabbis Who Are Boycotting Some Israeli Ministers Are From Extremist Left Wing Groups (J Street; T’ruah; JVP)
Uncategorized June 3, 2021
ZOA: Israel’s Reasonable Judicial Reform Proposals Are Good for Democracy, the Rule of Law and the Economy
Uncategorized June 3, 2021
Israel’s “Right of Return” Grandparent Clause is De-Judaizing the Jewish State – Eliminate It
News June 3, 2021
ZOA is Disappointed, Offended and Frightened by 211 U.S. House Votes Supporting Jew-Hating, Israel-Hating Rep. Ilhan Omar
Center for Law & Justice
We work to educate the American public and Congress about legal issues in order to advance the interests of Israel and the Jewish people.
We assist American victims of terrorism in vindicating their rights under the law, and seek to hold terrorists and sponsors of terrorism accountable for their actions.
We fight anti-Semitism and anti-Israel bias in the media and on college campuses.
We strive to enforce existing law and also to create new law in order to safeguard the rights of the Jewish people in the United States and Israel.
Our Mission
ZOA STATEMENT
The ZOA speaks out for Israel – in reports, newsletters, and other publications. In speeches in synagogues, churches, and community events, in high schools and colleges from coast to coast. In e-mail action alerts. In op-eds and letters to the editor. In radio and television appearances by ZOA leaders. Always on the front lines of pro-Israel activism, ZOA has made its mark.
Related Articles
OP-ED ZOA Praises KKL-JNF Approval to Purchase Privately-Owned Land in Judea/Samaria