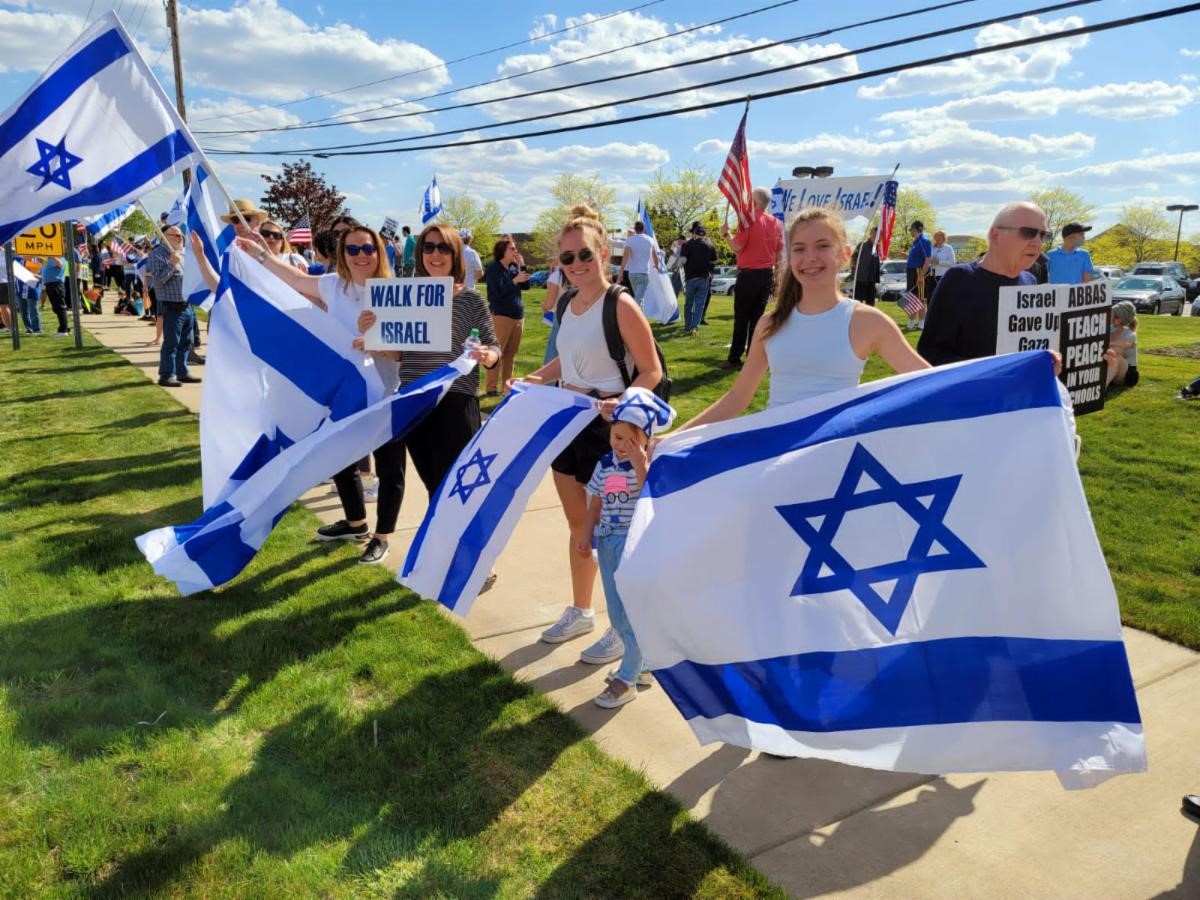 Representatives of a broad spectrum of the Jewish community led a united front against anti-Jewish bigotry and violence that is on the rise as tensions increase in the Middle East. The event was helmed by the Zionist Organization of America’s Michigan Region.

About 200 people united on a very hot Sunday afternoon to show solidarity against a rising tide of antisemitism. The rally took place on June 6 on the west side of Orchard Lake Road north of 14 Mile in West Bloomfield.

“Before the Holocaust, there was not enough protest against antisemitism,” said Kobi Erez, executive director of ZOA-MI. “Jews were discriminated against. Their stores were boycotted. They were attacked in the streets. People, including some Jews, thought it would pass if they just stayed silent.

“We’ve seen a lot of hatred and a lot of violence all across the U.S., and in Europe, towards Jews,” he said. “We see a lot of signs that are similar to what happened in Europe in the ’30s, where Jews were attacked just because they were Jewish.”

“We are standing with our brothers and sisters in Israel, and we want to show our support and solidarity, that we are proud to be Jewish and have a strong connection to Israel,” Erez said. “We believe America should stand beside Israel as well.”

“It’s important for us to show Americans that we are proud of Israel, that Israel is America’s best friend and to show we believe in the morality of what Israel is doing.

“We don’t want to stay silent to antisemitism or to hatred, and we urge everybody to support Israel in words and actions, and to reach out to Congress and reach out to your neighbors and friends,” Erez said.

ZOA-MI President Sheldon Freilich, added, “Since the 1930s, we have not seen this kind of hatred, Jews attacked on the streets and graffiti defacing buildings. I’m a child of Holocaust survivors, and I’m scared of what’s going on in our United States of America. As Americans, we need to stand up and not accept this.

“Many antisemites today view Israel as a reason to attack Jews. This is denounced by the internationally accepted definition of antisemitism.

“Write to congressional leaders,” Freilich urged. “Write to the White House. Write to the media. They need to take action against antisemitism.”

We would love to hear from you! Please fill out this form and we will get in touch with you shortly.
Trending Z
News June 16, 2021
ZOA Condemns U.S. State Dept. & U.S. Amb. Nides For Siding with Antisemitic, Discriminatory Palestinian & Hamas Terrorists re: the Temple Mount, Violating Jews’ Religious Freedom
News June 16, 2021
ZOA’s Klein JPost Op-Ed: There is Nothing Extreme About Israel’s New Government
Uncategorized June 16, 2021
FLASH: ISRAEL-JORDAN PEACE TREATY (1994) GUARANTEES JEWS ACCESS TO THE TEMPLE MOUNT – LET MY PEOPLE PRAY
Uncategorized June 16, 2021
ZOA Analysis: Most American Rabbis Who Are Boycotting Some Israeli Ministers Are From Extremist Left Wing Groups (J Street; T’ruah; JVP)
Center for Law & Justice
We work to educate the American public and Congress about legal issues in order to advance the interests of Israel and the Jewish people.
We assist American victims of terrorism in vindicating their rights under the law, and seek to hold terrorists and sponsors of terrorism accountable for their actions.
We fight anti-Semitism and anti-Israel bias in the media and on college campuses.
We strive to enforce existing law and also to create new law in order to safeguard the rights of the Jewish people in the United States and Israel.
Our Mission
ZOA STATEMENT
The ZOA speaks out for Israel – in reports, newsletters, and other publications. In speeches in synagogues, churches, and community events, in high schools and colleges from coast to coast. In e-mail action alerts. In op-eds and letters to the editor. In radio and television appearances by ZOA leaders. Always on the front lines of pro-Israel activism, ZOA has made its mark.
Related Articles
OP-ED BY: Joshua Needleman ZOA & Penn Middle East Center Plan Meeting Over Breaking the Silence Event – Jewish Exponent