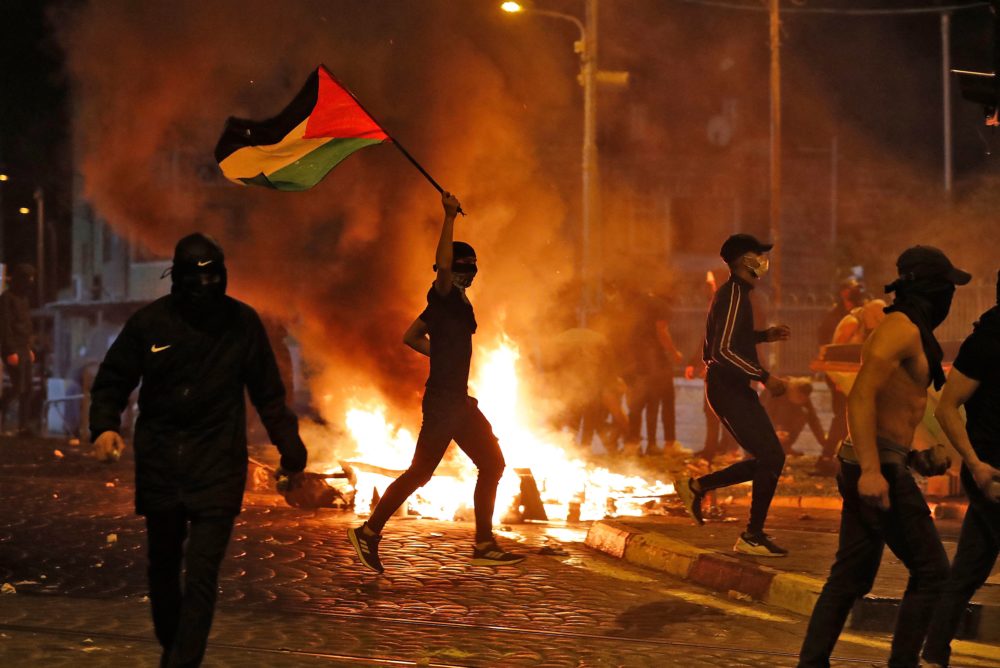 During her remarks at the United Nations Security Council (UNSC) on October 19, 2021, U.S. Ambassador to the United Nations Linda Thomas-Greenfield called for the UNSC to reduce its criticism of Israel and adopt “a more balanced approach.” But then Ambassador Thomas-Greenfield engaged in the same type of unbalanced criticism of Israel that she complained about.

The U.S. Ambassador exaggerated and condemned (rare to non-existent) “violence perpetrated by Israeli settlers in the West Bank against Palestinians and their property” – but said nothing about Palestinian Arab terrorists’ daily, too often deadly, shooting, firebombing, boulder-throwing, car-ramming and pipe-bombing attacks on Jews. Ambassador Thomas-Greenfield also said nothing about the Palestinian-Authority’s continuing payments of $400 million per year of “pay to slay” lifetime pensions incentivizing and rewarding Arabs to murder Jews.

In just three “normal” months this past summer (June-August 2021), Arab terrorists perpetrated 469 terror attacks – including 19 pipe bomb attacks, 18 shootings, 100 firebomb attacks, 27 arson attacks and assault, among numerous other incidents. That’s five significant Arab terror attacks every single day. And those 469 attacks do not even include the daily rock throwing, harassment, property destruction, and other violence Palestinian Arabs perpetrate against Jews.

In addition, in May 2021, Israeli Arabs perpetrated widespread pogroms, incited by both Hamas and the Palestinian Authority, in which Israeli Arabs looted and burnt hundreds of Jewish homes, vehicles and synagogues and attacked their Jewish neighbors, while Hamas and Palestinian Islamic Jihad launched 4,369 rockets at Israel over the course of 11 days, murdering 13 Jews, injuring hundreds of Jews, and doing billions of dollars of property damage in Israel.

Why was Ambassador Thomas-Greenfield silent about such real, persistent attacks on Jews?

Further, the “ceasefire” that the U.S. insisted that Israel must enter into in May, before Israel could finish destroying Hamas rocket sites and terror tunnels, has proven to have emboldened Hamas. Hamas and PIJ rockets have not stopped. In August 2021, Hamas launched 19 rockets at Israel. But again, Ambassador Thomas-Greenfield said nothing about Hamas and Palestinian Islamic Jihad (PIJ) rockets.

Even worse, instead of condemning continuing Hamas rocket fire, the U.S. Ambassador lauded that the Biden administration gave $319 million to UNRWA in Gaza this year, and called for even more funding to UNRWA and Gaza. These funds simply reward and abet terrorism. As UN investigations confirmed, Hamas uses UNRWA schools to store and launch rockets at Israel, and as sites for terror tunnels. UN Watch reports detailed that 100 UNRWA staff and school Facebook pages contain antisemitism and terrorist incitement. The Committee on the Elimination of Racial Discrimination, and the Institute for Monitoring Peace and Cultural Tolerance in School Education (IMPACT-se – see its 2021 report), again recently exposed that UNRWA’s curricula, textbooks and teaching continue to be rife with incitement to violence and hatred and support for terrorism against Jews and Israel.

The U.S. Ambassador should insist that UNRWA must stop aiding Hamas and inciting its students to anti-Jewish violence – before the U.S. or any other country gives UNRWA another dime.

On a helpful note, ZOA does appreciate that Ambassador Thomas-Greenfield condemned Hamas’ refusal to return Israeli civilians, and murdered Israeli soldiers’ bodies to their families. However, much more needed to be said.

There were still other troubling aspects of the Ambassador’s speech. Amb. Thomas-Greenfield thanked notorious inciter of anti-Jewish terror Hanan Ashrawi and the hostile-to-Israel group J Street’s co-founder Daniel Levy for sharing their views. Daniel Levy is infamous for calling Israel’s rebirth “an act that was wrong.”

Amb. Thomas-Greenfield’s call for a “balanced approach” to criticism of Israel is also problematic. A “balanced approach” implies that it’s fine to falsely condemn human-rights-observing Israel, as long as one also mentions a few negatives about Hamas, PIJ, and/or Fatah/PLO/the Palestinian Authority. The U.S. Ambassador should be demanding that the UN Security Council should: simply focus on the truth; end its obsession with making false accusations against Israel; and condemn Hamas’ and the Palestinian Authority’s genocidal actions against the Jewish people.

We would love to hear from you! Please fill out this form and we will get in touch with you shortly.
Trending Z
Uncategorized October 22, 2021
FLASH: ISRAEL-JORDAN PEACE TREATY (1994) GUARANTEES JEWS ACCESS TO THE TEMPLE MOUNT – LET MY PEOPLE PRAY
Uncategorized October 22, 2021
ZOA Analysis: Most American Rabbis Who Are Boycotting Some Israeli Ministers Are From Extremist Left Wing Groups (J Street; T’ruah; JVP)
Uncategorized October 22, 2021
Israel’s “Right of Return” Grandparent Clause is De-Judaizing the Jewish State – Eliminate It
Uncategorized October 22, 2021
Exclusive: ZOA Accuses Ilhan Omar of Hating the U.S. ‘as Much as Israel,’ Lauds Kevin McCarthy for ‘Throwing Her Off the HFAC’
Center for Law & Justice
We work to educate the American public and Congress about legal issues in order to advance the interests of Israel and the Jewish people.
We assist American victims of terrorism in vindicating their rights under the law, and seek to hold terrorists and sponsors of terrorism accountable for their actions.
We fight anti-Semitism and anti-Israel bias in the media and on college campuses.
We strive to enforce existing law and also to create new law in order to safeguard the rights of the Jewish people in the United States and Israel.
Our Mission
ZOA STATEMENT
The ZOA speaks out for Israel – in reports, newsletters, and other publications. In speeches in synagogues, churches, and community events, in high schools and colleges from coast to coast. In e-mail action alerts. In op-eds and letters to the editor. In radio and television appearances by ZOA leaders. Always on the front lines of pro-Israel activism, ZOA has made its mark.
Related Articles
OP-ED BY: ZOA Staff ZOA Praises JCRC For Expelling Anti-Israel BDS From Israel Day Parade