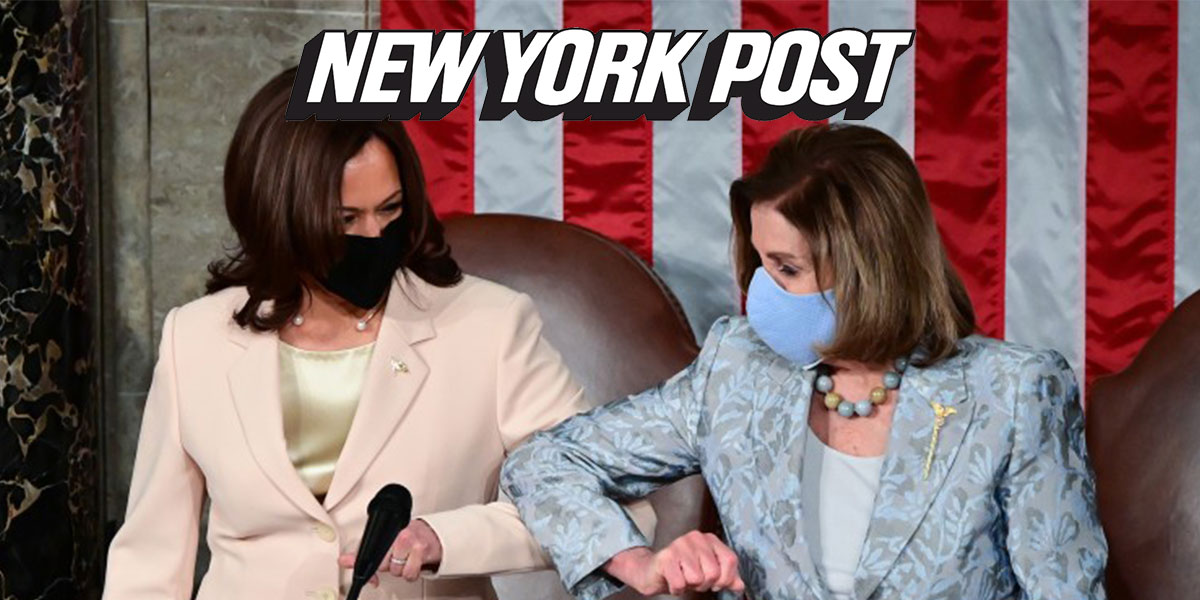 By Douglas Schoen and Andrew Stein

(OCTOBER 26, 2021 / NEW YORK POST) We’ve often sounded alarms over fellow Democrats who demonize Israel. But lately, even our party’s establishment and its leaders have become complicit in the consequences — by failing to denounce these attacks. Voters need to demand that top officials from both parties speak up loudly.

Such attacks put Jews in tangible danger and threaten the United States’ and Israel’s national security, given that Israel is our closest ally and the only stable democracy in the Middle East.

The harshest rhetoric emanates from the party’s progressives. Yet the Democratic establishment increasingly seems OK with it. Even Vice President Kamala Harris, one of the most powerful Democrats, actually applauded a student who accused Israel of “ethnic genocide,” saying that the young woman’s “truth should not be suppressed.”

It’s shocking: The claim of “ethnic genocide” is patently false, and it’s used as a rallying cry by extremists who seek Israel’s destruction. It also plays into a vile, twisted antisemitic stereotype that the Jewish state — and by extension, the Jewish people — are oppressors. For Harris to have endorsed that is more than alarming.

And she’s hardly alone. Indeed, anti-Israel sentiment has even infiltrated U.S. policymaking, sending an even louder message and carrying real consequences for Israel.

Pelosi has also looked the other way when progressives sprout antisemitic rhetoric. In 2019, Rep. Ilhan Omar (D-Minn.) questioned American Jews’ loyalty to the United States, charging that U.S. support of Israel was “all about the Benjamins” and playing into the antisemitic stereotype that Jews are financial schemers. Omar then pushed another slur, casting Jews as deceitful oppressors by saying Jewish Democrats were “not partners in justice.”

Pelosi said nothing, and Omar faced no repercussions: She kept her seat on the House Foreign Affairs Committee and continues to wield influence over the Democratic agenda.

To be sure, we don’t believe Pelosi is antisemitic or that she opposes Israel’s right to exist. Yet at times, she’s prioritized politics and holding her caucus together over standing up for Israel and the Jewish people.

The trouble is that turning a blind eye to such speech allows extremism to infiltrate the mainstream, with severe consequences. Pelosi and other top Democrats are putting Israel’s survival and the Jewish community at risk.

And though Senate Majority Leader Chuck Schumer (a Jewish-American himself) did denounce Omar’s remarks in 2019, he has recently aligned himself with the progressive Left and, like Pelosi, has refrained from denouncing other unfair slams against Israel by fellow Democrats.

During the Hamas attacks on Israel in May 2021, for example, progressives called for an end to U.S. military aid to Jerusalem; Rep. Alexandria Ocasio-Cortez (D-BX-Queens) even echoed the false accusation that Israel is an “apartheid state.” Neither Schumer nor Pelosi condemned it.

Schumer was also silent when Senate Foreign Relations Committee Chairman Bob Menendez (D-NJ) condemned both Israel and Palestinians in the same statement, suggesting a moral equivalence between them that’s neither logical nor supported by evidence.

Nor did Schumer voice support for Israel during the May conflict, either in an independent press release or his regular Senate floor remarks. Instead, he joined 28 other senators who called for a premature ceasefire that would’ve harmed Israel’s efforts to prevent Hamas from waging future attacks.

How does top Dems’ silence imperil Jews? Here’s one way: During the May conflict, the Anti-Defamation League recorded 305 incidents of antisemitism in the United States, a 115 percent increase from the same period last year.

It’s no coincidence. You can’t separate the rise in antisemitic violence from the growing influence of members in Congress who marginalize Israel, want to undermine Israel’s ability to defend itself and question the right of the Jewish state to exist without facing consequences from party leadership.

The attacks, and threats to Jews, won’t slow down unless Americans — regardless of party or religion — demand their leaders speak up.

This article was originally published in the New York Post and can be viewed here.

We would love to hear from you! Please fill out this form and we will get in touch with you shortly.
Trending Z
News October 27, 2021
ZOA Condemns U.S. State Dept. & U.S. Amb. Nides For Siding with Antisemitic, Discriminatory Palestinian & Hamas Terrorists re: the Temple Mount, Violating Jews’ Religious Freedom
News October 27, 2021
ZOA’s Klein JPost Op-Ed: There is Nothing Extreme About Israel’s New Government
Uncategorized October 27, 2021
FLASH: ISRAEL-JORDAN PEACE TREATY (1994) GUARANTEES JEWS ACCESS TO THE TEMPLE MOUNT – LET MY PEOPLE PRAY
Uncategorized October 27, 2021
ZOA Analysis: Most American Rabbis Who Are Boycotting Some Israeli Ministers Are From Extremist Left Wing Groups (J Street; T’ruah; JVP)
Center for Law & Justice
We work to educate the American public and Congress about legal issues in order to advance the interests of Israel and the Jewish people.
We assist American victims of terrorism in vindicating their rights under the law, and seek to hold terrorists and sponsors of terrorism accountable for their actions.
We fight anti-Semitism and anti-Israel bias in the media and on college campuses.
We strive to enforce existing law and also to create new law in order to safeguard the rights of the Jewish people in the United States and Israel.
Our Mission
ZOA STATEMENT
The ZOA speaks out for Israel – in reports, newsletters, and other publications. In speeches in synagogues, churches, and community events, in high schools and colleges from coast to coast. In e-mail action alerts. In op-eds and letters to the editor. In radio and television appearances by ZOA leaders. Always on the front lines of pro-Israel activism, ZOA has made its mark.
Related Articles
OP-ED BY: Susan B. Tuchman, Esq. and Morton A. Klein State Dep’t Sells Out Terror Victims – ZOA Op-ed in JNS

During the past few days, the media and political candidates have been were busy using, for their own political purposes, the El Paso, Texas, shooter’s “manifesto” and attack on Aug. 3 that left 22 people dead. For instance, Timemagazine falsely claimed that U.S. President Donald Trump called the white supremacists who rallied in Charlottesville, Va., in the summer […]