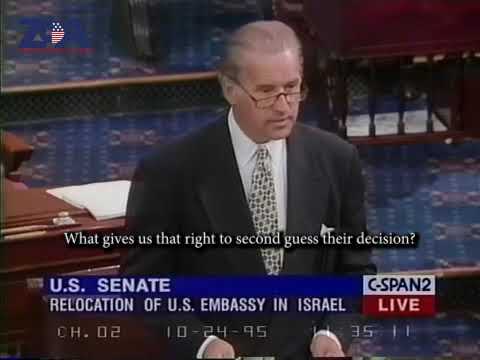 “have had the view for the past 24 years that the only way there will be peace in the Middle East is for the Arabs to know there is no division between the United States and Israel–none, zero, none.

I argue that is why we are where we are today, because we did not relent under the leadership of this President and others. We made it clear that no wedge would be put between us, thereby leaving no alternative but the pursuit, in an equitable manner, for peace.

Those familiar, and all are on this floor, with the Jewish people know the central meaning that the ancient city of Jerusalem has for Jews everywhere. Time and again, empires have tried to sever the umbilical cord that unites Jews with their capital.

They have destroyed the temple. They have banished the Jews from living in Jerusalem. They have limited the number of Jews allowed to immigrate to that city. And, finally, in this century, they tried simply to eliminate Jews.(Mr. KYL assumed the chair.)Mr. BIDEN. They may have succeeded, Mr. President, in destroying physical structures and lives. But they have never succeeded in wholly eliminating Jewish presence in Jerusalem, or in cutting the spiritual bond between Jews and their cherished capital.

After the horrific events of the Holocaust, the Jewish people returned to claim what many rulers have tried to deny them for centuries: The right to peaceful existence in their own country in their own capital.

How many of us can forget that poignant photograph of an unnamed Israeli soldier breaking down in tears and prayer as he reached the Western Wall after his army liberated the eastern half of the city in the Six Day War?

Those tears told a story. A story of a people long denied their rightful place among nations. A people denied access to their most hallowed religious sites. A people who had finally, after long tribulation, come home.

Mr. President, it is unconscionable for us to refuse to recognize the right of the Jewish people to choose their own capital. What gives us the right to second-guess their decision?

For 47 years, we, and much of the rest of the international community, have been living a lie. For 47 years, Israel has had its government offices, its Parliament, and its national monuments in Jerusalem, not in Tel Aviv. And yet, nearly all embassies are located in Tel Aviv. I think this is a denial of fundamental reality.

Mr. President, are we, through the continued sham of maintaining our Embassy in Tel Aviv, to refuse to acknowledge what the Jewish people know in their hearts to be true? Regardless of what others may think, Jerusalem is the capital of Israel.

And Israel is not just any old country. It is a vital strategic ally.

As the Israelis and Palestinians begin the final status negotiations in May 1996–negotiations, I might add, that were made possible through the leadership of President Clinton–it should be clear to all that the United States stands squarely behind Israel, our close friend and ally.

Moving the U.S. Embassy to Jerusalem will send the right signal, not a destructive signal. To do less would be to play into the hands of those who will try their hardest to deny Israel the full attributes of statehood.

I urge my colleagues to support this legislation.”

We would love to hear from you! Please fill out this form and we will get in touch with you shortly.
Trending Z
News November 10, 2021
ZOA Condemns U.S. State Dept. & U.S. Amb. Nides For Siding with Antisemitic, Discriminatory Palestinian & Hamas Terrorists re: the Temple Mount, Violating Jews’ Religious Freedom
News November 10, 2021
ZOA’s Klein JPost Op-Ed: There is Nothing Extreme About Israel’s New Government
Uncategorized November 10, 2021
FLASH: ISRAEL-JORDAN PEACE TREATY (1994) GUARANTEES JEWS ACCESS TO THE TEMPLE MOUNT – LET MY PEOPLE PRAY
Uncategorized November 10, 2021
ZOA Analysis: Most American Rabbis Who Are Boycotting Some Israeli Ministers Are From Extremist Left Wing Groups (J Street; T’ruah; JVP)
Center for Law & Justice
We work to educate the American public and Congress about legal issues in order to advance the interests of Israel and the Jewish people.
We assist American victims of terrorism in vindicating their rights under the law, and seek to hold terrorists and sponsors of terrorism accountable for their actions.
We fight anti-Semitism and anti-Israel bias in the media and on college campuses.
We strive to enforce existing law and also to create new law in order to safeguard the rights of the Jewish people in the United States and Israel.
Our Mission
ZOA STATEMENT
The ZOA speaks out for Israel – in reports, newsletters, and other publications. In speeches in synagogues, churches, and community events, in high schools and colleges from coast to coast. In e-mail action alerts. In op-eds and letters to the editor. In radio and television appearances by ZOA leaders. Always on the front lines of pro-Israel activism, ZOA has made its mark.
Related Articles
OP-ED ZOA National President Morton A. Klein on Newsmax’s “The Chris Salcedo Show” Discussing Joe Biden’s Hostile-to-Israel Appointments