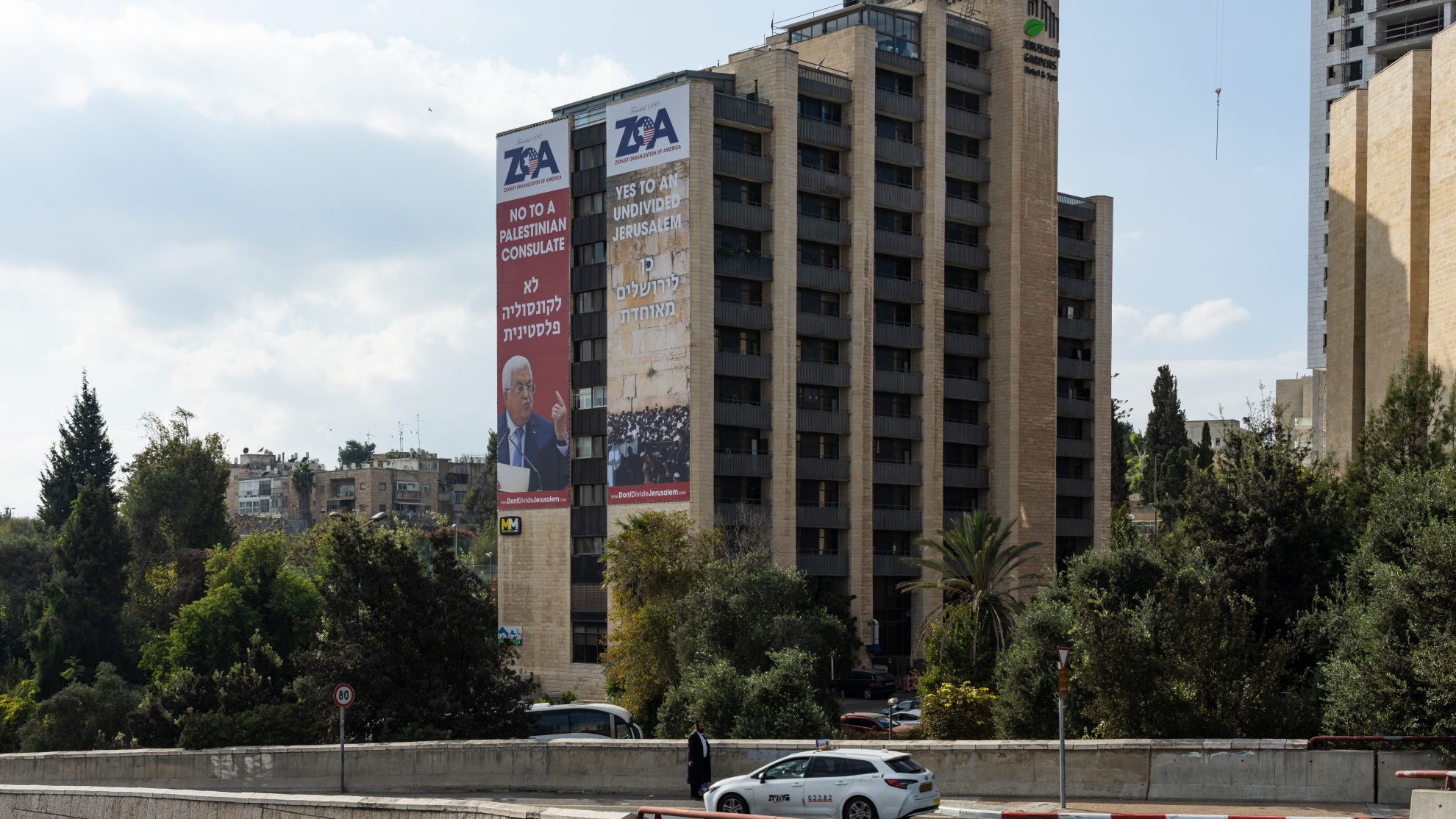 Israelis Are United In Opposition to a U.S. Consulate for Palestinians in Jerusalem

(NOVEMBER 5, 2021 / THE MEDIA LINE) Israelis in large part are united in opposition to a second diplomatic mission in Jerusalem, but the U.S. is likely to go through with it anyway, experts say 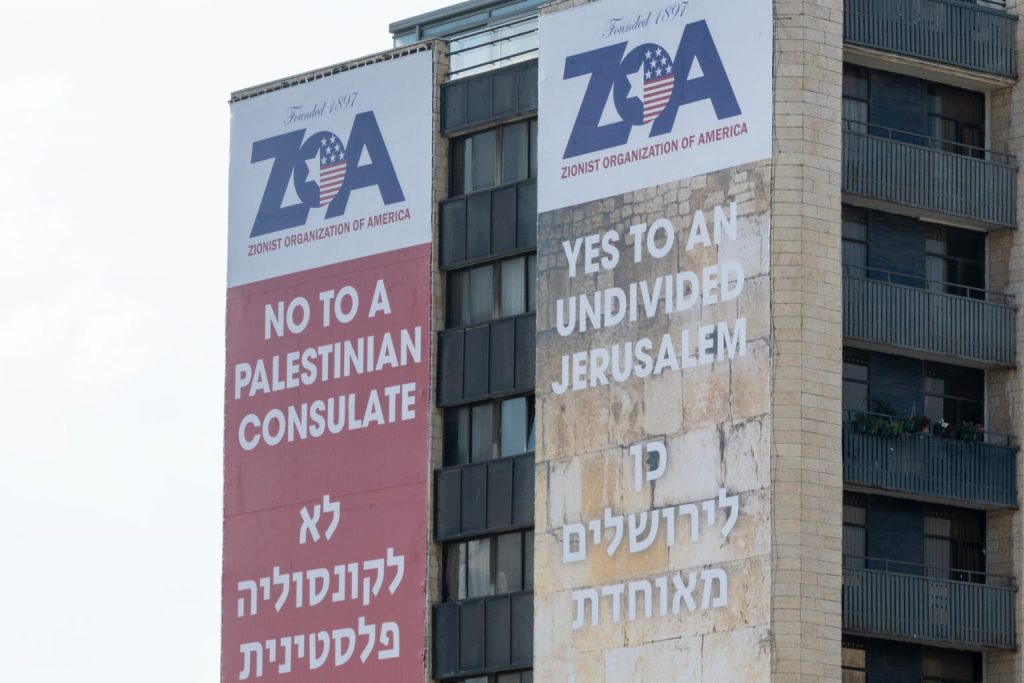 Several huge banners appeared in Jerusalem and Tel Aviv recently emblazoned with Palestinian Authority President Mahmoud Abbas’ image and a message in both English and Hebrew opposing U.S. President Joe Biden’s decision to reopen its consulate that deals with Palestinians living in east Jerusalem, the West Bank and Gaza.

“No to a Palestinian consulate. Yes to an undivided Jerusalem,” read the billboards placed by the Zionist Organization of America, which launched a billboard campaign against the planned opening of the U.S. diplomatic mission.

Many now wonder if Biden can fulfill a campaign pledge to reopen the American Consulate in east Jerusalem. Pressure is mounting in Israel against the White House on this issue and Israeli officials vow they will do all they can to stop the U.S. move.

Professor Efraim Inbar, president of the Jerusalem Institute for Strategy and Security (JISS), a conservative think tank, told The Media Line that Israel is staunchly opposing the reopening of the diplomatic mission.

“There is no precedent in the world where a country has an embassy and opens a consulate for another country or political entity. This has simply never been done,” he said.

Inbar says such a move by the Biden administration is an encroachment on Israel’s sovereignty, as the U.S. argues that east Jerusalem is an occupied territory and therefore, under international law, does not fall under Israeli control.

“They can think that, but for Israel it is a united city and it is in our possession. If they want to build a consulate here, they need our permission,” he said.

The consulate was ordered shut in 2018, when former U.S. President Donald Trump ordered the embassy to move from Tel Aviv to Jerusalem in a break with decades-old U.S. foreign policy.

In late 2017, Trump officially recognized Jerusalem as the capital of Israel.

The massive signs, Inbar says, show that Israelis in large part are united when it comes to this issue.

Meanwhile, the location that the U.S. is considering for the consulate is not even in east Jerusalem, which makes it more difficult for Israeli officials “across the political spectrum” to side with Washington, according to Inbar.

“They want to establish it on Agron Street, which is not disputed territory. Agron Street has been part of west Jerusalem and I don’t think the Americans see that,” he said.

Inbar explains that the decision will have a negative affect on the stability of the current Israeli government.

“I doubt that the Israeli government will capitulate to the American pressure, but of course there is always a chance, and it will lead to a governmental crisis,” he predicts.

But the pressure from Israel is not the only one Biden is facing; he is also under pressure from 35 Republican senators who have introduced a bill to prevent the U.S. Consulate from being opened and to keep its operations strictly within the confines of the American Embassy in Jerusalem.

The harsh criticism by the Biden administration, and its condemnation, is some of the strongest against Israel in years.

Dr. Uzi Rabi, director of the Moshe Dayan Center for Middle Eastern and African Studies at Tel Aviv University, told The Media Line that the issue has put “pressure” on the strategic relations between the two allies.

“The Israeli right, when it comes to issues like these, will not give up. This will create a power struggle within the government,” he said.

This article was originally published by The Media Line and can be viewed here.

We would love to hear from you! Please fill out this form and we will get in touch with you shortly.
Trending Z
Uncategorized November 10, 2021
FLASH: ISRAEL-JORDAN PEACE TREATY (1994) GUARANTEES JEWS ACCESS TO THE TEMPLE MOUNT – LET MY PEOPLE PRAY
Uncategorized November 10, 2021
ZOA Analysis: Most American Rabbis Who Are Boycotting Some Israeli Ministers Are From Extremist Left Wing Groups (J Street; T’ruah; JVP)
Uncategorized November 10, 2021
Israel’s “Right of Return” Grandparent Clause is De-Judaizing the Jewish State – Eliminate It
Uncategorized November 10, 2021
Exclusive: ZOA Accuses Ilhan Omar of Hating the U.S. ‘as Much as Israel,’ Lauds Kevin McCarthy for ‘Throwing Her Off the HFAC’
Center for Law & Justice
We work to educate the American public and Congress about legal issues in order to advance the interests of Israel and the Jewish people.
We assist American victims of terrorism in vindicating their rights under the law, and seek to hold terrorists and sponsors of terrorism accountable for their actions.
We fight anti-Semitism and anti-Israel bias in the media and on college campuses.
We strive to enforce existing law and also to create new law in order to safeguard the rights of the Jewish people in the United States and Israel.
Our Mission
ZOA STATEMENT
The ZOA speaks out for Israel – in reports, newsletters, and other publications. In speeches in synagogues, churches, and community events, in high schools and colleges from coast to coast. In e-mail action alerts. In op-eds and letters to the editor. In radio and television appearances by ZOA leaders. Always on the front lines of pro-Israel activism, ZOA has made its mark.
Related Articles
OP-ED ZOA Praises KKL-JNF Approval to Purchase Privately-Owned Land in Judea/Samaria