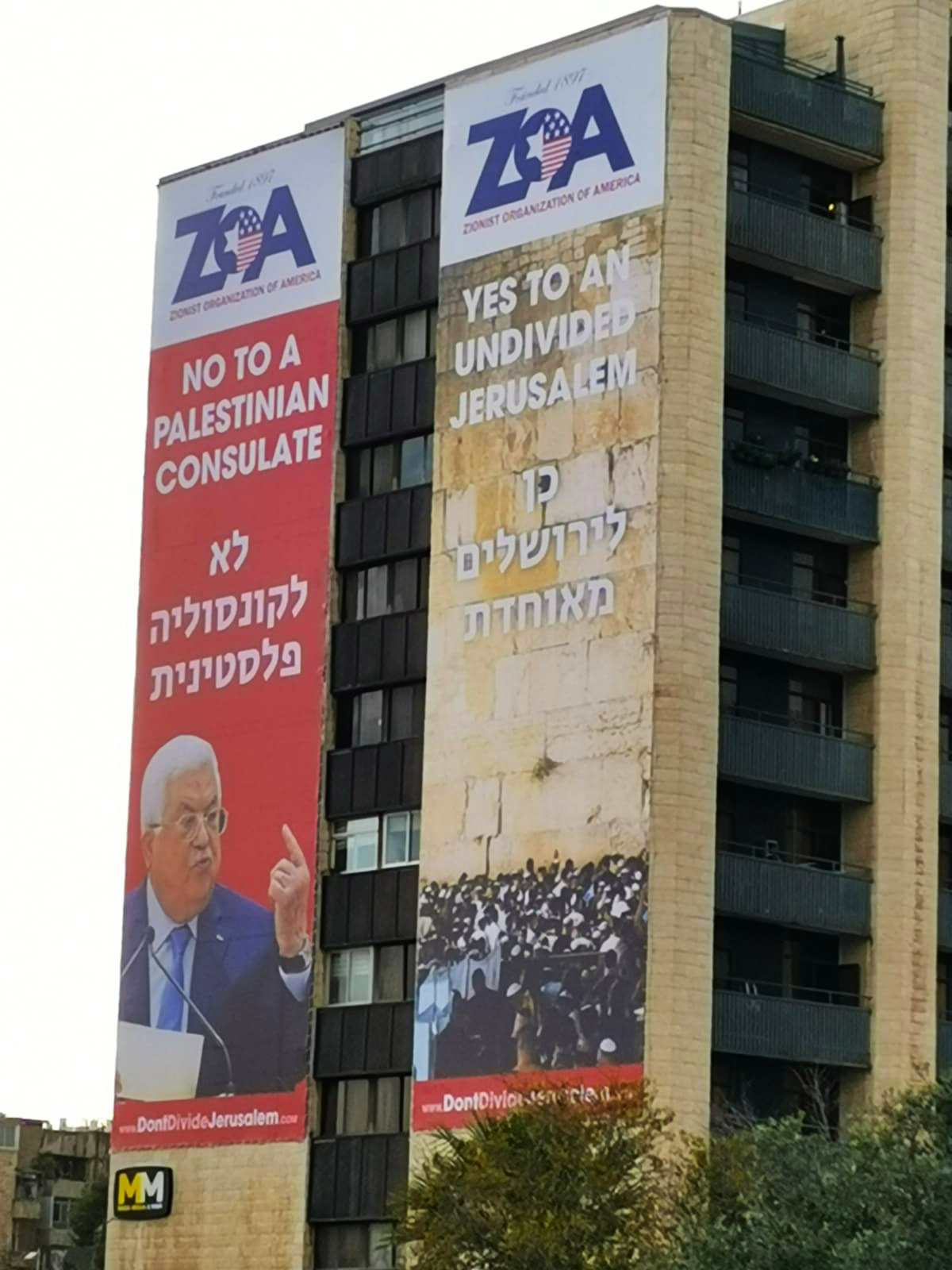 The ZOA is pleased that after a major ZOA campaign in Israel and America, the Biden administration is now freezing its plan to open an insulting, divisive, unlawful U.S. consulate in Jerusalem for Palestinian Arabs. ZOA strongly praises Israel and the Israeli government and Members of the Knesset for standing strong against the opening of the consulate ­­­­– Under the Vienna Convention on Consular Affairs, the consulate could not lawfully be opened without Israel’s consent.

ZOA and our activists and donors are gratified to have contributed to the effort to stop the consulate from opening. ZOA mounted a major campaign against the opening of the consulate, with huge billboards in Jerusalem, Israel; ads in eleven American Jewish newspapers; press releases, op-eds, speeches, and action alerts to our activists who called their representatives to object to the consulate.

ZOA’s campaign made clear that opening the consulate would violate the Jerusalem Embassy Act of 1995, which declared that Jerusalem is the capital of Israel and a united, undivided city.

A consulate for Palestinian Arabs would be a disgraceful, frightening, dangerous step towards dividing the Jewish people’s eternal capital – Jerusalem; would undermine the 2017 presidential recognition of Jerusalem as Israel’s capital and subsequent move of the U.S. Embassy to Jerusalem; and would encourage and reward the terrorist dictatorship Palestinian Authority and its promotion of violence and Jew-hatred, giving lifetime pensions to Palestinian Arabs to murder Jews and Americans, and its demands to wrest Israel’s capital away. Opening the consulate would likely also result in violations of the Oslo Accords, which forbid the Palestinian Authority from engaging in foreign diplomatic relations.

ZOA was the only major nonpartisan Jewish organization that publicly supported Israel on this issue and mounted a major campaign against the opening of the consulate.

In early November, at meetings of the Conference of Presidents of Major American Jewish Organizations, the AZM and the New York Board of Rabbis, in response to questions from ZOA President Morton Klein and ZOA Director of Research Liz Berney, Esq. on this issue, Israeli Minister of the Interior Ayelet Shaked stated and urged that it would be very important and helpful for more American Jewish organizations to publicly oppose the current U.S. administration’s pressure on Israel to allow the U.S. to open the divisive, illegal consulate for Palestinian Arabs in Jerusalem.

Minister Shaked also explained that Israel’s people and leaders from all parties – including Naftali Bennett, Yair Lapid, Gidon Saar and herself – all oppose opening the Jerusalem consulate for Palestinian Arabs.

ZOA urges other major nonpartisan Jewish organizations including the Umbrella groups to publicly speak up and fight on this issue if an additional campaign becomes necessary in the future.

We would love to hear from you! Please fill out this form and we will get in touch with you shortly.
Trending Z
News December 15, 2021
At ZOA Gala Secy Pompeo Gave the Greatest, Most Pro-Israel Speech Ever Delivered by a Public Official
News December 15, 2021
Dershowitz in Arutz 7: NYC’s Temple Emanu-El Silences a Pro-Israel Voice & Promotes an Anti-Israel Voice
Uncategorized December 15, 2021
Jewish Press: Has Deborah Lipstadt Undercut Both Herself and Future Antisemitism Envoys?
CLJ December 15, 2021
ZOA Letter to Jason Wingard, President, Temple U, Concerning an Antisemitic Incident
Center for Law & Justice
We work to educate the American public and Congress about legal issues in order to advance the interests of Israel and the Jewish people.
We assist American victims of terrorism in vindicating their rights under the law, and seek to hold terrorists and sponsors of terrorism accountable for their actions.
We fight anti-Semitism and anti-Israel bias in the media and on college campuses.
We strive to enforce existing law and also to create new law in order to safeguard the rights of the Jewish people in the United States and Israel.
Our Mission
ZOA STATEMENT
The ZOA speaks out for Israel – in reports, newsletters, and other publications. In speeches in synagogues, churches, and community events, in high schools and colleges from coast to coast. In e-mail action alerts. In op-eds and letters to the editor. In radio and television appearances by ZOA leaders. Always on the front lines of pro-Israel activism, ZOA has made its mark.
Related Articles
OP-ED BY: ZOA Staff ZOA Criticizes Pres. Obama For Praising Abbas’ “Renoucing Violence” –– Kerry For Calling Israel Demand of Recognition As “Jewish State” A Mistake