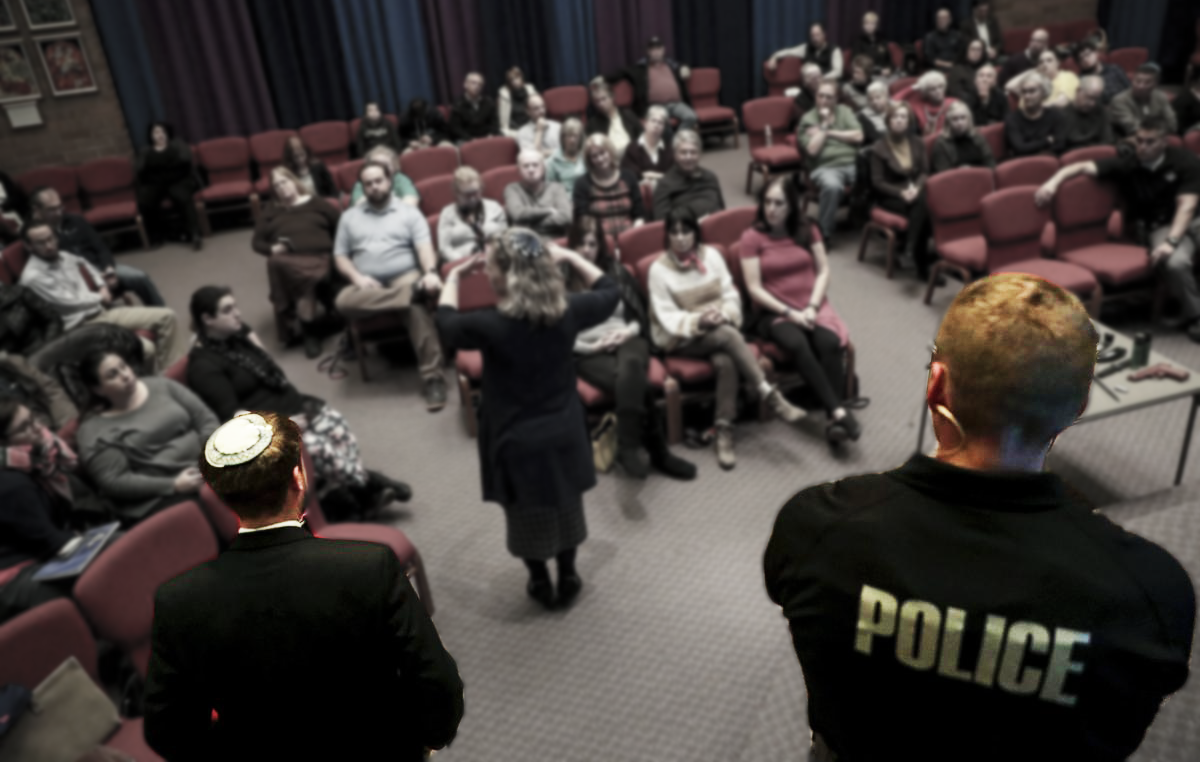 ZOA to ADL — Stop Downplaying Islamist Antisemitism and Highlighting that the Problem is “Islamophobia” etc.

The ZOA is deeply relieved that Rabbi Charlie Cytron-Walker and three other Jewish hostages were able to escape, physically unharmed, after being held hostage on the holy Sabbath by radical Islamist Jihadi terrorist Malik Faisal Akram at Reform Congregation Beth Israel in Colleyville, Texas. ZOA commends the bravery of the rabbi, the other hostages, and law enforcement. We pray that the hostages, the congregation, and all concerned will speedily and fully recover from the trauma that they experienced.

We believe there is much to be learned so that we can avoid similar, and potentially far worse, situations in the future:

Training: Rabbi Cytron-Walker and the synagogue Board’s vice president, Jeffrey Cohen, emphasized that the active shooter training received from the Secure Community Network saved their lives. Hopefully, this will encourage other synagogues and Jewish institutions to obtain needed active shooter and security training.

Vetting PeopleOutsidethe Synagogue: Jews, and clergy of all faiths are naturally hospitable. Thus, we understand Rabbi Cytron-Walker’s impulse to welcome Malik Faisal Akram into the synagogue when Akram knocked on the door. However, in this era of rapidly increasing antisemitic attacks and threats, many synagogues are vetting unknown people before they get inside the door. If Akram had been vetted outside, that might have stopped Akram before he could do any harm.

Checking for “Casing” and Other Security Measures: Islamist terrorist Malik Faisal Akram spent several days in the Colleyville area before taking hostages at the synagogue. He may have “cased” the synagogue beforehand. One way to avoid terror attacks is to keep an eye (or camera) out for unknown persons who may be casing the synagogue for future attacks. Many synagogues today also have trained armed congregants and other advance security measures.

***ZOA to ADL — Stop Downplaying Islamist Antisemitism and Highlighting that the Problem is “Islamophobia” etc.:

By contrast, ADL spent 56 sentences on white supremacists’ ugly internet posts about the hostage situation, plus five illustrations; and 12 sentences accusing experts on Islamic antisemitism of “elevating Islamophobia,” plus a copy of an internet post. One of the targets of ADL’s article, pro-Israel Islam expert Robert Spencer, noted that “Virtually every part of [ADL’s claims about Islamophobia] is vicious and defamatory,” and that the ADL was essentially saying that it is “anti-Muslim to oppose Jihad violence and Islamic antisemitism.”

The FBI’s initial refusal to label this attack as antisemitic – claiming instead that the hostage-taking was “not specifically related to the Jewish community,” and President Biden’s remarks on Sunday that motive is still undetermined, are deeply troubling. Malik Faisal Akram specifically targeted a synagogue and Jewish hostages as part of his plan to release from prison his metaphysical “sister,” Pakistani Islamist, Jew-hater, and convicted terrorist Aafia Siddiqui, a.k.a. “Lady Al-Qaeda.”

It is obvious that when a terrorist makes antisemitic or anti-Israel comments, or defends a Jew-hater, and/or targets a synagogue, a Jewish institution, Jewish children or adults, or people mistakenly believed to be Jewish, it’s an antisemitic attack.

***Improve Vetting of Entrants into the U.S., Including Pakistani Islamists:

The FBI deserves praise for helping free the hostages. However, the FBI’s failure to vet and bar the entry into the U.S. of Malik Faisal Akram – who apparently had a criminal record and came from a notorious U.K. Islamist “no-go” zone of radical Pakistani Islamists – was a colossal failure. Shillman Journalism Fellow Daniel Greenfield explained that, “As far back as 2013, Pakistani Muslim terrorists had plotted to take “foreign Jews” hostage to trade for ‘Lady Al-Qaeda’ [Aafia Siddiqui]. In 2022, a Pakistani Muslim terrorist [Malik Faisal Akram] actually went out and did it.”

CNN’s Peter Bergen also described how Aafia Siddiqui became an icon for terrorists, and noted: “In her native Pakistan, Siddiqui is lionized by some as a victim of the ‘war on terrorism.’ Thousands took to the streets in protest when she was convicted of the attempted murder of the U.S. army officer in 2010. Now, once again, Siddiqui’s imprisonment in Texas is being used as a rationale for terrorism against Americans, this time in the United States itself.”

We are sorry and sad to have to bring this up, but it is important. A particularly painful irony here is that Rabbi Cytron-Walker has too often maligned Israel. The Rabbi’s sermon five weeks ago, on December 10, 2021 (still posted on the synagogue website as of this writing), falsely accused Israel of harming Palestinian Arabs and treating non-Jews unfairly. In another still-posted sermon on May 7, 2021, the rabbi stated that a faction of Israel’s Religious Zionist Party “support[s] racial separation and expelling Arabs” – a grossly misleading exaggeration of one MK’s position favoring expelling only those Arabs who throw Molotov cocktails. A former congregant, Itamar Gelbman, posted that Rabbi Cytron-Walker allegedly “called Israel an apartheid state against Islam,” and refused to allow members to be armed during services.

Rabbi Cytron-Walker also signed an ugly letter by the hostile-to-Israel group T’ruah, denying Israel’s lawful rights to sovereignty over the Jewish heartlands of Judea/Samaria, where over 500,000 Jews live (which are also essential to Israel’s security). The letter falsely asserted that Israel’s sovereign right to this area is a “flagrant violation of international laws”; “violates human rights”; “weakens democracy”; and is “a messianist and ultra-nationalist fantasy that violates Jewish values of dignity for every human being.”

We pray that Rabbi Cytron-Walker and other Jews will avoid making such false, harmful, defamatory, and even inciteful statements about Israel and their fellow Jews there in the future.

We would love to hear from you! Please fill out this form and we will get in touch with you shortly.
Trending Z
News January 18, 2022
ZOA Condemns U.S. State Dept. & U.S. Amb. Nides For Siding with Antisemitic, Discriminatory Palestinian & Hamas Terrorists re: the Temple Mount, Violating Jews’ Religious Freedom
News January 18, 2022
ZOA’s Klein JPost Op-Ed: There is Nothing Extreme About Israel’s New Government
Uncategorized January 18, 2022
FLASH: ISRAEL-JORDAN PEACE TREATY (1994) GUARANTEES JEWS ACCESS TO THE TEMPLE MOUNT – LET MY PEOPLE PRAY
Uncategorized January 18, 2022
ZOA Analysis: Most American Rabbis Who Are Boycotting Some Israeli Ministers Are From Extremist Left Wing Groups (J Street; T’ruah; JVP)
Center for Law & Justice
We work to educate the American public and Congress about legal issues in order to advance the interests of Israel and the Jewish people.
We assist American victims of terrorism in vindicating their rights under the law, and seek to hold terrorists and sponsors of terrorism accountable for their actions.
We fight anti-Semitism and anti-Israel bias in the media and on college campuses.
We strive to enforce existing law and also to create new law in order to safeguard the rights of the Jewish people in the United States and Israel.
Our Mission
ZOA STATEMENT
The ZOA speaks out for Israel – in reports, newsletters, and other publications. In speeches in synagogues, churches, and community events, in high schools and colleges from coast to coast. In e-mail action alerts. In op-eds and letters to the editor. In radio and television appearances by ZOA leaders. Always on the front lines of pro-Israel activism, ZOA has made its mark.
Related Articles
OP-ED ZOA Praises KKL-JNF Approval to Purchase Privately-Owned Land in Judea/Samaria