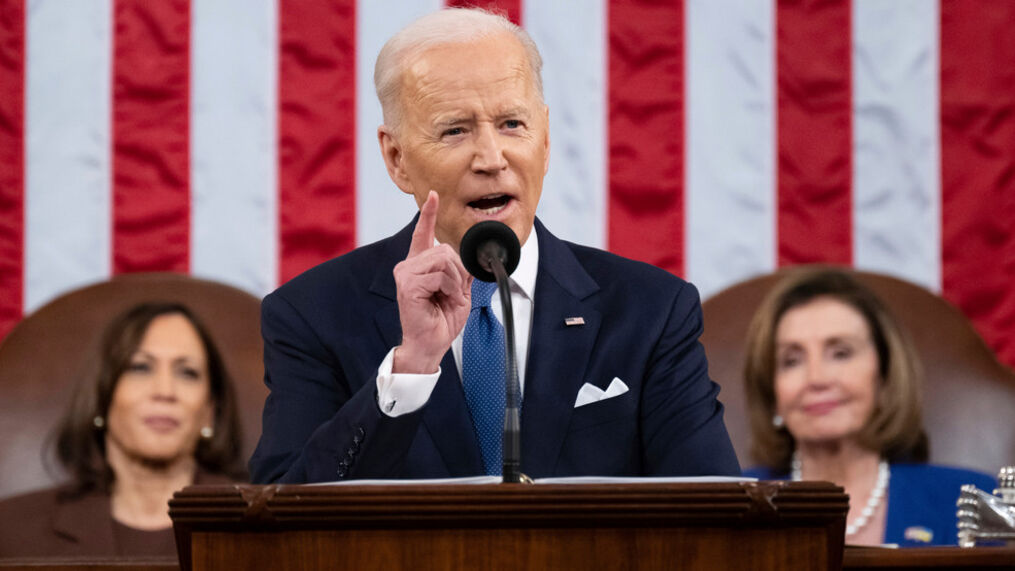 The ZOA is deeply disappointed that President Joe Biden’s State of the Union address last night failed to mention Iran’s threats and the catastrophic Iran deal situation; failed to mention Russia’s recent move of nuclear-capable warplanes and hypersonic missiles into Syrian bases; and failed to call for effective steps to fight antisemitism; and the Arab-Israel issue; and American energy independence. Biden spoke out for various minority groups, but missed the important opportunity to speak out against increasing attacks on Jews.

Iran: Biden never mentioned his close-to-final negotiations of a terrible Iran deal. The contemplated deal would: enrich Iran with an estimated $90 billion to use for its military and terror activities; allow Iran to keep thousands of centrifuges and advanced centrifuges spinning (thereby enabling Iran to re-enrich down-blended uranium to weapons level within a few months); allow Iran to keep a significant amount of enriched uranium; limit inspections; fail to require Iran to “come clean” about its weaponization activities; fail to require Iran to permanently agree to the Nuclear Proliferation Treaty’s Additional Protocol (for inspections); and fail to restrict Iran’s missile and terror activities. The deal also contains fast-approaching “sunset” provisions that will cause restrictions on Iran to expire within a few short years. In addition, Biden failed to mention Iran’s ongoing threats to annihilate the U.S., Israel, and U.S. leaders.

Russia’s Move of Nuclear-Capable Warplanes and Missiles Into Syria: Just two weeks ago (on February 15th), Russia moved long-range, nuclear-capable Tu-22M3 bombers and MiG-31 fighter jets carrying the latest Kinzhal hypersonic cruise missiles to Russia’s Hemeimeem airbase in Latakia, Syria. The Kinzhal missiles have a range of 1,250 miles and fly at ten times the speed of sound, making them difficult to intercept. Russia also expanded a naval base in Tartus, Syria, and engaged in massive naval drills near Syria two weeks ago. These Russian moves threaten U.S. carriers in the Mediterranean, and endanger Europe, Israel, and other nations in the Middle East. These moves are also an indication that Russia won’t stop with its invasion of Ukraine. Biden’s SOTU never mentioned these dangerous moves, which were further reason for imposing U.S. sanctions on Russian energy and providing more military aid to Ukraine.

Ukraine’s brave Jewish President Volodymyr Zelenskyy, who lost half of his family in the Holocaust, tweeted that Russia shot missiles at and destroyed Kyiv’s Holocaust memorial at Babyn Yar.

Biden’s failure to take the most effective needed actions, and continuing purchases of Russian oil, is enabling this new human rights catastrophe.

Biden’s Failure to Mention Combating Antisemitism and Protecting Jews: It is extremely disappointing that President Biden did not mention combating growing antisemitic attacks and protecting Jews. Jews are the major victims of religious hate crimes (60%) in the U.S. By contrast, Biden spoke about protecting various other groups, including LGBTQ+, women, Asians, transgenders and younger transgenders.

The failure to mention combating antisemitism is particularly jarring because only six weeks ago, an Islamist took hostages at the Colleyville synagogue; and only two weeks ago, a Louisville BLM activist shot at and attempted to murder a Jewish mayoral candidate.

Biden missed a perfect opportunity to speak out strongly against antisemitism and counteract the vicious antisemitism spouted by the radical “Squad” in Congress (Rashida Tlaib, Ilhan Omar, AOC, etc.).

Biden also missed a great opportunity to honor the bravery of those who survived or stopped antisemitic attacks. It would have sent a strong message to honor people such as Rabbi Shlomo Noginski, who led a knife-wielding, gun-toting Islamist away from a Jewish children’s camp in Boston in July. Rabbi Noginski survived being stabbed eight times by the Islamist attacker, and likely prevented a massacre of Jewish children.

In contrast to Biden’s silence, during the 2019 SOTU, then-President Trump stated: “We must never ignore the vile poison of antisemitism, or those who spread its venomous creed. With one voice, we must confront this hatred anywhere and everywhere it occurs.” At the same SOTU, Trump also honored Officer Timothy Matson, who raced into the gunfire and was shot seven times chasing down the white supremacist who killed 11 innocent Jews at the Pittsburgh synagogue. At the SOTU, Trump also honored a Holocaust survivor who also survived the Pittsburgh attack.

Biden should have said something similar to combat the antisemitic attacks of the past few months.

We would love to hear from you! Please fill out this form and we will get in touch with you shortly.
Trending Z
Uncategorized March 2, 2022
FLASH: ISRAEL-JORDAN PEACE TREATY (1994) GUARANTEES JEWS ACCESS TO THE TEMPLE MOUNT – LET MY PEOPLE PRAY
Uncategorized March 2, 2022
ZOA Analysis: Most American Rabbis Who Are Boycotting Some Israeli Ministers Are From Extremist Left Wing Groups (J Street; T’ruah; JVP)
Uncategorized March 2, 2022
Israel’s “Right of Return” Grandparent Clause is De-Judaizing the Jewish State – Eliminate It
Uncategorized March 2, 2022
Exclusive: ZOA Accuses Ilhan Omar of Hating the U.S. ‘as Much as Israel,’ Lauds Kevin McCarthy for ‘Throwing Her Off the HFAC’
Center for Law & Justice
We work to educate the American public and Congress about legal issues in order to advance the interests of Israel and the Jewish people.
We assist American victims of terrorism in vindicating their rights under the law, and seek to hold terrorists and sponsors of terrorism accountable for their actions.
We fight anti-Semitism and anti-Israel bias in the media and on college campuses.
We strive to enforce existing law and also to create new law in order to safeguard the rights of the Jewish people in the United States and Israel.
Our Mission
ZOA STATEMENT
The ZOA speaks out for Israel – in reports, newsletters, and other publications. In speeches in synagogues, churches, and community events, in high schools and colleges from coast to coast. In e-mail action alerts. In op-eds and letters to the editor. In radio and television appearances by ZOA leaders. Always on the front lines of pro-Israel activism, ZOA has made its mark.
Related Articles
OP-ED ZOA Praises Trump Executive Order on Immigration