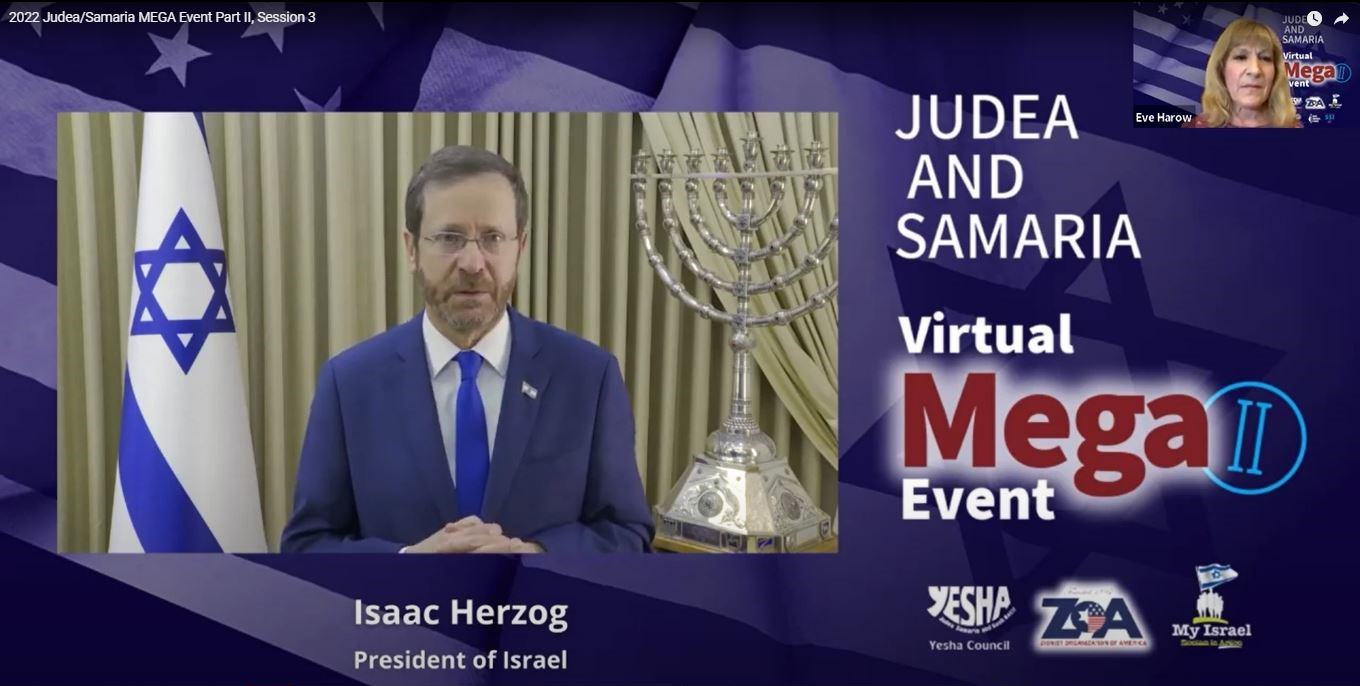 (MARCH 6, 2022 / JERUSALEM POST) Jewish archaeological sites in the West Bank must be preserved, President Isaac Herzog told the English-speaking community in Israel and abroad. He delivered the short virtual address during the third in a series of Judea and Samaria mega-events.

“Much of the Jewish People’s history in this land is rooted in the hills and valleys of Judea and Samaria,” Herzog said.

“Here our Patriarchs and Matriarchs lived and were laid to rest. Here Joshua led the Sons and Daughters of Israel, Bnei Yisrael, into the land; King David began his rule; our prophets spread their teachings, which we teach today, and every Shabbat; and Jewish rebels—from the Maccabees to Bar Kochva—fought for what they believed in,” he explained.

“Beyond any political dispute we should all agree to protect the integrity of Jewish historical and archaeological sites throughout the Land of Israel, as well as the historical sites belonging to other religions and cultures which have left their stamp on this region throughout the ages,” he explained.

“This is not just a Jewish or Israeli issue, but an issue of protecting the heritage of all humanity in the Holy Land,” Herzog said.

He also took a moment to speak of Israel’s status as both the Jewish national homeland and a democracy “built on equality and religious freedom.”

It is also important, he said, to work for a future of peace, cooperation and dialogue particularly through the Abraham Accords, under whose rubric Israel normalized ties with four of its Arab neighbors.

His statement to the group was among a number of strong statements Herzog has made in support of the Jewish and Israeli connection to the West Bank, including his visit to the Tomb of the Patriarchs in Hebron.

The mega-events have been sponsored by the Yesha Council, My Israel and the Zionist Organization of America.

The first event focused on the need for Israeli sovereignty in Area C of the West Bank, the second on the issue of illegal Palestinian building and the third on the need to preserve the Jewish archaeological heritage in that area, also known as the biblical heartland.

The Yesha Council and right wing organizations have long campaigned for the preservation of biblical archaeology in the West Bank, warning that the Palestinian Authority was usurping and destroying the ancient Jewish heritage in that region.

Among the examples the speakers at the event later gave was Sebastia, the capital of the northern kingdom of ancient Israel, as well as a burial cave for priests from the Second Temple near Jericho.

Binyamin Regional Council head Israel Ganz said that “more than 80% of the ancient historical sites” in Judea and Samaria have been damaged.

It is “this fact that our enemies try to uproot when they destroy the archaeological treasures in Judea and Samaria. Yes, they know exactly what they are doing. Our enemies want to disconnect the Land of Israel from Jewish history in order to claim that we are a colonial power that came to a foreign land.”

Illouz said that “it is time for the free world to unite against those who destroy history,” he said.

“When ISIS destroyed archaeological sites the whole world went crazy and justifiably so,” he said. “On this subject there is no difference between ISIS and the Palestinians,” he added.

Missed the Webinar? Watch it on our Youtube channel here:

We would love to hear from you! Please fill out this form and we will get in touch with you shortly.
Trending Z
Uncategorized March 7, 2022
ZOA Analysis: Most American Rabbis Who Are Boycotting Some Israeli Ministers Are From Extremist Left Wing Groups (J Street; T’ruah; JVP)
Uncategorized March 7, 2022
ZOA: Israel’s Reasonable Judicial Reform Proposals Are Good for Democracy, the Rule of Law and the Economy
Uncategorized March 7, 2022
Israel’s “Right of Return” Grandparent Clause is De-Judaizing the Jewish State – Eliminate It
News March 7, 2022
ZOA is Disappointed, Offended and Frightened by 211 U.S. House Votes Supporting Jew-Hating, Israel-Hating Rep. Ilhan Omar
Center for Law & Justice
We work to educate the American public and Congress about legal issues in order to advance the interests of Israel and the Jewish people.
We assist American victims of terrorism in vindicating their rights under the law, and seek to hold terrorists and sponsors of terrorism accountable for their actions.
We fight anti-Semitism and anti-Israel bias in the media and on college campuses.
We strive to enforce existing law and also to create new law in order to safeguard the rights of the Jewish people in the United States and Israel.
Our Mission
ZOA STATEMENT
The ZOA speaks out for Israel – in reports, newsletters, and other publications. In speeches in synagogues, churches, and community events, in high schools and colleges from coast to coast. In e-mail action alerts. In op-eds and letters to the editor. In radio and television appearances by ZOA leaders. Always on the front lines of pro-Israel activism, ZOA has made its mark.
Related Articles
OP-ED BY: Joshua Needleman ZOA & Penn Middle East Center Plan Meeting Over Breaking the Silence Event – Jewish Exponent