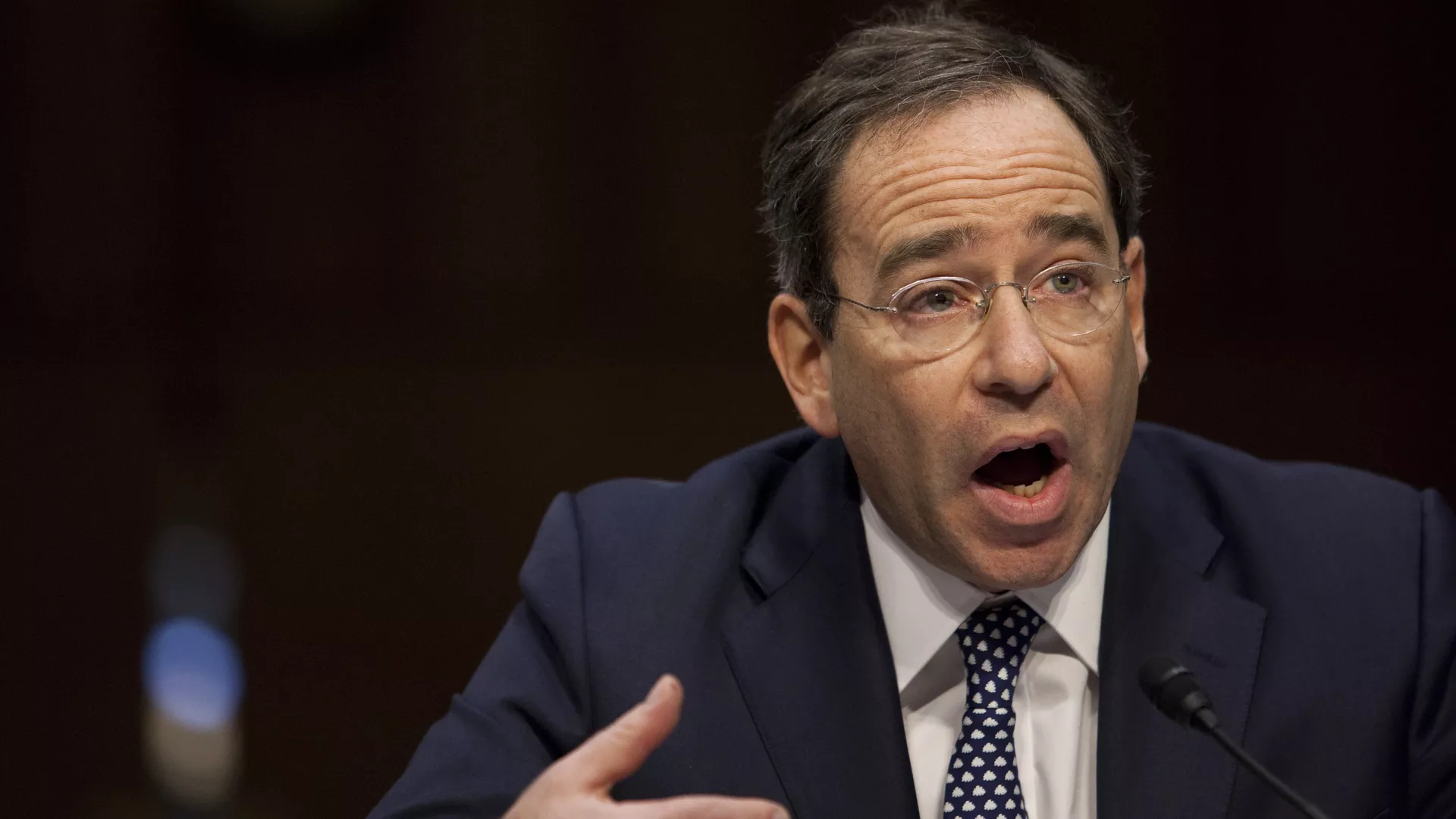 First, Nides denounced the Jewish State of Israel and Jews building homes in and around Jerusalem and Judea and Samaria as “stupid” and “infuriating.” This is intolerable! Would Nides ever call the Palestinian Arabs’ terrorist dictator Mahmoud Abbas stupid and infuriating?

Moreover, Jerusalem and Judea/Samaria are the Biblical Jewish heartlands where the Jewish kingdoms stood and most Jewish Biblical history took place. These areas are guaranteed to the Jewish people under binding international law – including U.S. treaty obligations. Would Nides ever say that it would be stupid for Blacks to live in a white suburb because it might infuriate and agitate the Whites? That would of course be unlawful housing discrimination. Jews are the indigenous people in Israel. Nides needs to stop inflicting his discriminatory demands on Jews in Israel.

In addition, Nides bragged about his constant pressure on Israel to stop Jewish building, and touted his success in obtaining the cancelation of a critical housing project in the E-1 corridor between Jerusalem and Jerusalem suburb Ma’aleh Adumim. (This was like preventing Americans from building units between Washington, D.C. and its suburb Bethesda.) The cancelation of the E-1 project moreover endangers Jewish lives. E-1 is a favorite corridor used by Palestinian Arabs to attack Jews on their way home from Jerusalem. Jewish homes in the area could do much to stop the terror onslaught.

Nides’ patronizing, stupid and infuriating statements and pressure on Jews to stop Jews from living in the Jewish homeland are unacceptable. ZOA again urges Israel’s government to ignore Nides’ pressure and to immediately restart the E-1 housing project.

Notably, Nides failed to call the real Palestinian Arab horrors “infuriating.” Nides should describe the Palestinian Authority’s payments to Arabs to murder Jews as Nazi-like, horrifying and infuriating. Nides should describe the PA’s naming of sports teams, schools and public squares after Jew-killing terrorists; and the PA’s incitement to kill Jews in the media and mosques and speeches and in textbooks as “infuriating.”

Instead, adding further insult to injury, Nides defamed all decent people who oppose the Palestinian Authority’s pay-to-slay payments as “haters,” and characterized the payments to “martyrs” as simply a “problem” indicating that the Palestinians are merely “not perfect.”

According to Nides, Jews are “stupid and infuriating” for wanting to build and live in the holy Jewish lands of eastern Jerusalem and Judea/Samaria, but the anti-peace extremist Palestinian Arabs are simply “not perfect” for paying Arab terrorists lifetime pensions to murder Jews.

Nides declared that “’These martyr payments . . . have caused an enormous amount of problems’ because it gives the ‘haters’ an excuse not to support the PA based on the argument that it is ‘paying for people who killed Jews.’”

As MK Simcha Rothman, Esq. (Religious Zionist Party) sarcastically noted, after saying he was proud to be a “hater” in the eyes of Ambassador Nides: “Everyone except the American ambassador must be ‘haters,’ not the terrorists and their supporters. This twisting of ethics requires rethinking about the American ambassador’s understanding of the Israeli-Palestinian conflict and his ability to serve as a mediator.”

Nides should be horrified and “infuriated” that these “martyr payments” promote murdering innocent Jews and Americans. Doesn’t Nides realize that if, G-d forbid, a Palestinian Arab murdered American Jew Nides and/or his American Christian wife, CNN Senior Vice President Virginia Carpenter Moseley, and/or their children, that their Arab murderer and the murderer’s family would receive a lifetime pension, which pays the murderer each year more than five times the average annual salary of a typical working Palestinian Arab? Why doesn’t Nides empathize with the bereft Jewish and/or American families who must live with the continuing pain and horror that their loved ones’ Arab murderers are being richly financially rewarded?

During his webinar with the BDS extremist group Peace Now, Nides also again pushed for opening an unlawful American consulate for Palestinian Arabs in Jerusalem. Such a consulate would undermine Jerusalem as Israel’s undivided eternal capital; violates the Jerusalem Embassy Act, the Oslo Accords and the Vienna Convention on Consular Relations; would be a divisive hotbed of anti-Israel activity; and exists in no other country. Nides acknowledged that Israel has “aggressively opposed it” and complained that both the Israelis and the PA “have made way too big a deal over this.” If it’s not such a big deal, then why does Nides continue to press for this unlawful consulate?

Nides also used the webinar to press for a Palestinian Arab state on Israel’s lawful land. Such a state would be a Gaza-style Iranian-proxy-Hezbollah-Fatah-Hamas terror state that endangers Israel’s existence.

A few weeks ago, Nides raised an uproar by disgracefully boycotting visits to Jewish communities in Judea/Samaria. (See “U.S. Amb. Nides Boycott of Judea/Samaria Condemned by ZOA: Mort Klein Op-Ed in JPost,” Feb. 3, 2020.) Nides has now furthered his anti-Israel BDS by making common cause with Peace Now – an extremist far-left wing group that openly promotes boycotts against the 700,000 Jews living in the lawful and historic Jewish heartlands of eastern Jerusalem and Judea/Samaria.

We would love to hear from you! Please fill out this form and we will get in touch with you shortly.
Trending Z
News March 18, 2022
Fox News Joins ZOA in Exposing ADL’s Dangerous, Extremist “Educational” Programs & Joins JNS Editor Tobin in Urging Firing ADL CEO Jonathan Greenblatt
Uncategorized March 18, 2022
U.S. Amb. to Israel Thomas Nides Endangers Israel’s Security & Interferes with Israeli Sovereignty, Violating International Law
ZOA in the news March 18, 2022
ZOA Slams Extreme Anti-Israel Berkeley Law School Bylaw | Israel National News – Arutz Sheva
News March 18, 2022
Lapid Lied, Telling UN Assembly ‘Large Majority of Israelis’ Want 2-State Solution. They Don’t. – Jewish Press
Center for Law & Justice
We work to educate the American public and Congress about legal issues in order to advance the interests of Israel and the Jewish people.
We assist American victims of terrorism in vindicating their rights under the law, and seek to hold terrorists and sponsors of terrorism accountable for their actions.
We fight anti-Semitism and anti-Israel bias in the media and on college campuses.
We strive to enforce existing law and also to create new law in order to safeguard the rights of the Jewish people in the United States and Israel.
Our Mission
ZOA STATEMENT
The ZOA speaks out for Israel – in reports, newsletters, and other publications. In speeches in synagogues, churches, and community events, in high schools and colleges from coast to coast. In e-mail action alerts. In op-eds and letters to the editor. In radio and television appearances by ZOA leaders. Always on the front lines of pro-Israel activism, ZOA has made its mark.
Related Articles
OP-ED Iran Sanctions Relief Will Provide Billions To Fund/Arm Terrorists