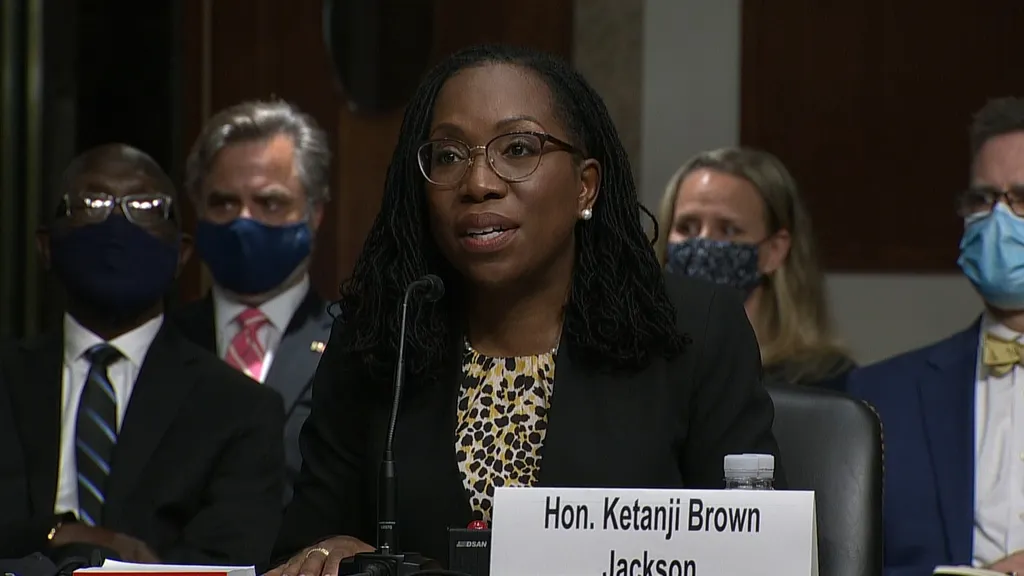 (March 14, 2022 / JNS) The most basic qualification for serving as a judge is to be impartial and free from bias. As such, a judge who harbors any antisemitic or racist views should surely not obtain a lifetime appointment to the U.S. Supreme Court. Moreover, in this era of alarming rising antisemitism, it is particularly critical for the Senate Judiciary Committee to assure that a judicial nominee has no hint of animus. It is thus incumbent upon the Senate Judiciary Committee to carefully question Supreme Court nominee Ketanji Brown Jackson about her attitudes and any involvement she may have had with the Harvard Black Students Association (BSA)’s invitation to antisemite, anti-white racist Leonard Jeffries to speak at Harvard University in 1991, while Ketanji Brown Jackson was a member of the Harvard BSA.

The judge should be given an opportunity to thoroughly and publicly denounce Jeffries’s absurd hateful views, and to answer questions along the following lines:

We note that her excellent decision in favor of pro-Israel group Z Street, against the Obama administration’s discriminatory IRS, is an important indication that Judge Jackson Brown abides by her judicial oath to act impartially—Z Street v. Koskiken, 444 F.Supp.3d 48 (DDC 2014), upheld on appeal, 791 F.3d 24 (2015).

Z Street sued the Obama administration’s IRS for engaging in impermissible viewpoint discrimination against pro-Israel groups by implementing an internal IRS review policy that subjected Israel-related organizations applying for tax-exempt status to more rigorous review procedures than other organizations applying for the same tax-exempt status. Jackson Brown rejected the IRS’s assertions that the Anti-Injunction Act, the Declaratory Judgment Act and the sovereign immunity doctrine barred Z Street’s lawsuit, and permitted Z Street to press its constitutional claims against the IRS.

It is nonetheless important to examine every aspect of the judge’s background and views that may bear on her service on the nation’s highest court to assure Congress and the American people that there is no possibility of bias.

Morton A. Klein is the national president of the Zionist Organization of America (ZOA).

We would love to hear from you! Please fill out this form and we will get in touch with you shortly.
Trending Z
Uncategorized March 20, 2022
FLASH: ISRAEL-JORDAN PEACE TREATY (1994) GUARANTEES JEWS ACCESS TO THE TEMPLE MOUNT – LET MY PEOPLE PRAY
Uncategorized March 20, 2022
ZOA Analysis: Most American Rabbis Who Are Boycotting Some Israeli Ministers Are From Extremist Left Wing Groups (J Street; T’ruah; JVP)
Uncategorized March 20, 2022
Israel’s “Right of Return” Grandparent Clause is De-Judaizing the Jewish State – Eliminate It
Uncategorized March 20, 2022
Exclusive: ZOA Accuses Ilhan Omar of Hating the U.S. ‘as Much as Israel,’ Lauds Kevin McCarthy for ‘Throwing Her Off the HFAC’
Center for Law & Justice
We work to educate the American public and Congress about legal issues in order to advance the interests of Israel and the Jewish people.
We assist American victims of terrorism in vindicating their rights under the law, and seek to hold terrorists and sponsors of terrorism accountable for their actions.
We fight anti-Semitism and anti-Israel bias in the media and on college campuses.
We strive to enforce existing law and also to create new law in order to safeguard the rights of the Jewish people in the United States and Israel.
Our Mission
ZOA STATEMENT
The ZOA speaks out for Israel – in reports, newsletters, and other publications. In speeches in synagogues, churches, and community events, in high schools and colleges from coast to coast. In e-mail action alerts. In op-eds and letters to the editor. In radio and television appearances by ZOA leaders. Always on the front lines of pro-Israel activism, ZOA has made its mark.
Related Articles
OP-ED ZOA Praises KKL-JNF Approval to Purchase Privately-Owned Land in Judea/Samaria