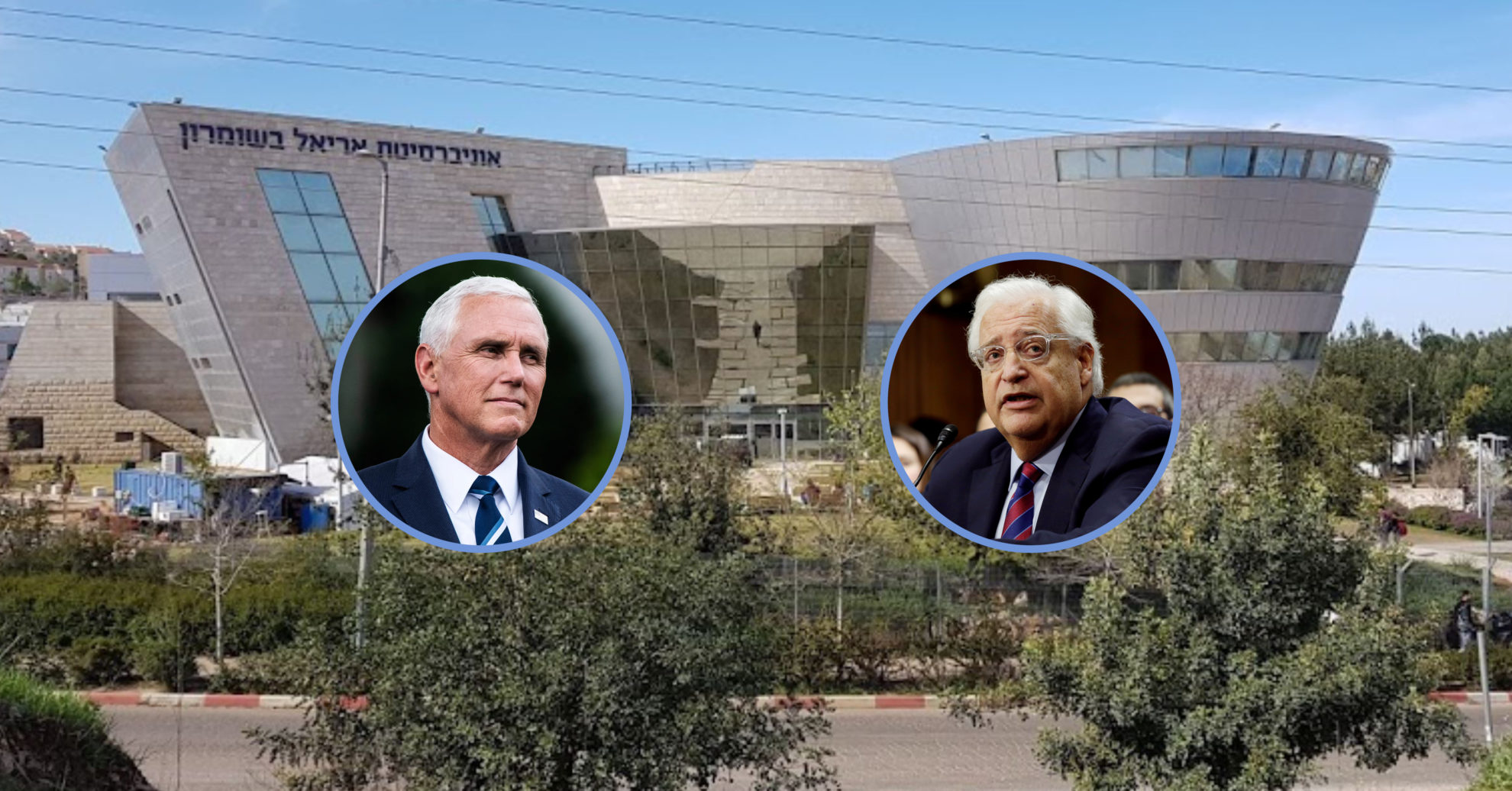 Praises Pence for Touring Hebron: “The Oldest Jewish Community in the World

The ZOA congratulates former Vice President Mike Pence and former U.S. Ambassador to Israel David Melech Friedman on their receiving honorary doctorates from Ariel University in Samaria, Israel last week. (I strongly recommend reading Friedman’s great new book “Sledgehammer,” magnificently detailing how breaking with the old ineffective ideas is bringing peace deals with more Arab states…ZOA is proud to have given Amb. Friedman our “Dr. Miriam & Sheldon G. Adelson Award” at our national Gala and the “Zionist Hero Award” at our Florida Gala, where Friedman stated that the ZOA audience’s powerful and earnest response to his words about his hopes to move the U.S. Embassy to Jerusalem inspired and motivated him to work even harder toward that goal…I’m also proud to say I sit on Ariel University’s Board of Governors.)

Both men richly deserve this honor for their diplomatic achievements enhancing the U.S.-Israel relationship; promoting U.S.-Israeli academic and scientific cooperation – including at Ariel University; respecting Israel’s rights, including the Jewish people’s rights to Israel’s eternal undivided capital Jerusalem and Judea/Samaria; countering threats from the Islamic Republic of Iran; and furthering peace between Israel and Arab nations. Both men have continued their important work even after leaving public office. For instance, Ambassador Friedman urged Israeli Minister of Justice Gideon Sa’ar to stand strong, and helped stave off the Biden administration’s plan to open a divisive consulate in Jerusalem for Palestinian Arabs – which would have undermined Jerusalem’s status as Israel’s undivided capital.

We are pleased that the speakers also honored our dear longtime friends and supporters – the extraordinary Dr. Miriam Adelson and her beloved departed husband who was the greatest Zionist in the world Sheldon G. Adelson – for their fabulous contribution of the Dr. Miriam and Sheldon G. Adelson School of Medicine at Ariel University. Ariel has become a major university, with distinguished schools of medicine, engineering, health sciences, natural sciences, architecture, the Cherna and Irving Moscowitz School of Communication, and social sciences and humanities. All are located on the Milken Family Campus. (ZOA is proud to say that the Moskowitz and Milken families are longtime and strong supporters of our work.) Ariel U has over 500 faculty members; and over 17,000 students from diverse backgrounds and faiths. It is an inspiring example of peaceful Jewish and Arab co-existence in Judea/Samaria.

It is incomprehensible . . . that in Vienna, the Biden administration has restarted negotiations for a new and even worse nuclear deal with Iran, using Russia as a mediator to secure that agreement. . . . The first Iran agreement was an unmitigated disaster. It did not deny Iran a nuclear weapon. It virtually guaranteed that it would obtain one in ten years. But the new deal will be even worse than the first. Despite what you may read, it is not longer and stronger. It’s even reported that there’s talk of sanctions relief against the terrorist IRGC, and there’s even talk of attempts to limit the ability of future American administrations to cancel the deal. . . .

Buying Iranian oil directly finances Islamic terrorists that sow violence in Israel and across the region and threaten the people of my country. We cannot allow the world’s leading state sponsor of terrorism to gain a vast funding stream to wage a campaign of brutality and death against innocent people here and around the world. Freedom-loving nations must never capitulate to the evil and murderous regime in Teheran. We must never allow Iran the means to sow terrorist violence around the world. . . .

Instead of making the Iran Deal longer and stronger, Biden and his team, headed by Iran and Hamas appeaser Robert Malley, is making the deal shorter and weaker.

VP Pence also started his speech by saying: “It’s great to be here in Ariel. I’m told that some people say that you shouldn’t go to Jewish communities in Judea and Samaria. I obviously have a different opinion.” ZOA appreciates this verbal protest against current U.S. Ambassador to Israel Thomas Nides’ shameful refusal to visit Jewish communities in Judea/Samaria, where hundreds of thousands of Jews live peacefully raising their families.

We would love to hear from you! Please fill out this form and we will get in touch with you shortly.
Trending Z
Uncategorized March 22, 2022
ZOA Analysis: Most American Rabbis Who Are Boycotting Some Israeli Ministers Are From Extremist Left Wing Groups (J Street; T’ruah; JVP)
Uncategorized March 22, 2022
ZOA: Israel’s Reasonable Judicial Reform Proposals Are Good for Democracy, the Rule of Law and the Economy
News March 22, 2022
ZOA is Disappointed, Offended and Frightened by 211 U.S. House Votes Supporting Jew-Hating, Israel-Hating Rep. Ilhan Omar
Uncategorized March 22, 2022
Israel’s “Right of Return” Grandparent Clause is De-Judaizing the Jewish State – Eliminate It
Center for Law & Justice
We work to educate the American public and Congress about legal issues in order to advance the interests of Israel and the Jewish people.
We assist American victims of terrorism in vindicating their rights under the law, and seek to hold terrorists and sponsors of terrorism accountable for their actions.
We fight anti-Semitism and anti-Israel bias in the media and on college campuses.
We strive to enforce existing law and also to create new law in order to safeguard the rights of the Jewish people in the United States and Israel.
Our Mission
ZOA STATEMENT
The ZOA speaks out for Israel – in reports, newsletters, and other publications. In speeches in synagogues, churches, and community events, in high schools and colleges from coast to coast. In e-mail action alerts. In op-eds and letters to the editor. In radio and television appearances by ZOA leaders. Always on the front lines of pro-Israel activism, ZOA has made its mark.
Related Articles
OP-ED BY: ZOA Staff ZOA Criticizes Pres. Obama For Praising Abbas’ “Renoucing Violence” –– Kerry For Calling Israel Demand of Recognition As “Jewish State” A Mistake