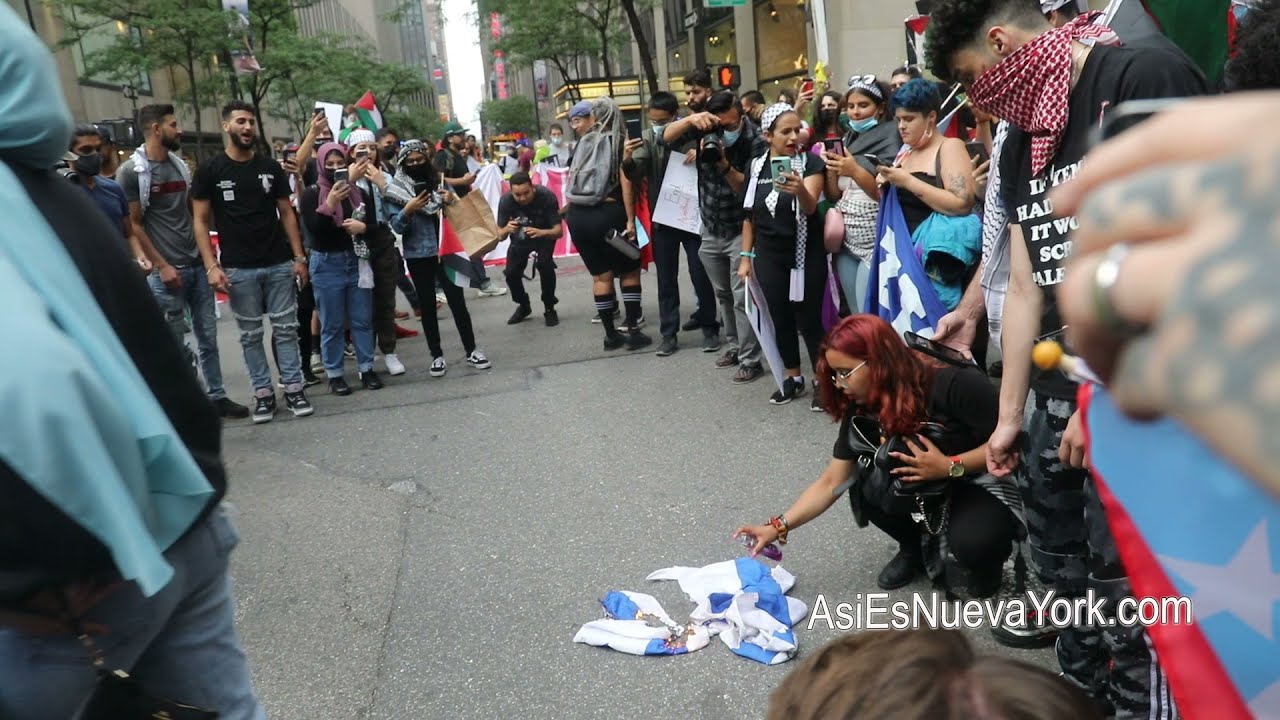 Re:      Request for Immediate Investigation and Prosecution of the “Mapping Project” and Other Hate Groups Targeting and Promoting Violence Against American Jews and Jewish Institutions

We write to alert you to the dangerous targeting and promoting of violence against American Jews and Jewish schools, charitable organizations and other institutions being carried out: (i) in the Commonwealth of Massachusetts by a Boston-area BDS group calling itself the “Mapping Project,” and (ii) throughout the United States by other anti-Jewish hate groups and their leaders.

The “Mapping Project” recently released a report alleging sinister connections between Jewish groups and the government, politicians, law enforcement, universities and the media; and blaming a long list of Jewish organizations, foundations, schools and individuals[1] for nefarious activities, including “racism,” “U.S. imperialism,” “colonialization” and “ethnic cleansing.”  Alarmingly, the “Mapping Project” plotted the locations of Jewish organizations on an interactive state map, [2] and released addresses and names of some groups’ staffers. The Mapping Project report also falsely defined “Zionism” as “a form of white supremacy” to engender hatred against Jews; and condemned “normalization” (treating Jews as normal people).

In a “dispatch” published on June 3, 2022, the Mapping Project’s organizers made their destructive aims clear, stating:  “Our goal in pursuing this collective mapping was to reveal the local entities and networks that enact devastation, so we can dismantle them.  Every entity has an address, every network can be disrupted.”[3]  The Mapping Project also explained: “We have shown physical addresses, named officers and leaders, and mapped connections. These entities exist in the physical world and can be disrupted in the physical world. We hope people will use our map to help figure out how to push back effectively.”[4]

The Mapping Project poses a severe danger to the safety of American Jews.  Congressman Jake Auchincloss (D-MA) described the Mapping Project as “chilling” and “sinister,” and stated that it plays on “millennia-old antisemitic tropes about nefarious Jewish wealth, control, conspiracy, media connections and political string-pulling,” and “can incite violence” and “inflame the deranged among us to take the next step from contemplating to acting upon violence.”[5]

Congressman Seth Moulton (D-MA) tweeted, “Targeting the Jewish community like this is wrong and it is dangerous.  It is irresponsible.  This [Mapping] project is an anti-Semitic enemies list with a map attached.”[6]

Congressman Ritchie Torres (D-NY) also tweeted: “The BDS movement put together ‘a mapping project’ that accuses Jewish and ‘Zionist’ institutions of various evils in American society.  Scapegoating is a common symptom of Antisemitism, which at its core is a conspiracy theory.”[1]

Virtually any connection, past or present, real or imagined, to Judaism, Jews in the United States, Jewish donors, Jewish charities or Israel makes one a Mapping Project target to dismantle.

The Mapping Project’s Jewish targets include:

This is undeniably rank antisemitism.

In addition, the Mapping Project targets universities throughout the Boston area that do or did any of the following connected to Jewish life:

Numerous other allegedly Jewish-related targets of the Mapping Project include (but are not limited to):

The “Mapping Project’s target list is spreading and “inspiring” other anti-Jewish hate groups to promote and incite anti-Jewish hatred in a similar frightening targeted manner.  For instance, the “Palestinian Youth Movement,” @palyouthmvmt, tweeted pages from the Mapping Project’s report, along with the statement: “May this project be an inspiration to anti-Zionist and anti-racist organizers everywhere.”[1]  In turn, “Globalize the Intifada” and others retweeted the Palestinian Youth Movement’s hateful tweet. 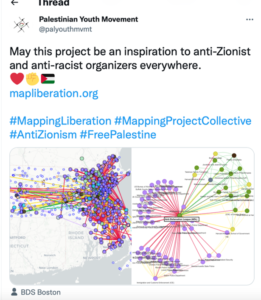 Additional Groups and Their Leaders Are Promoting Anti-Jewish Violence

Additional hate groups are promoting and inciting violence against Jews and Jewish institutions.  A brief video compiled by Canary Mission’s investigators[1] shows the leaders of the below groups calling for targeting and attacking Jews and Jewish organizations.  The video also shows recent frightening attacks on innocent American Jews on the streets of American cities.  These attacks, and the groups and individuals inciting them, must be stopped, and the perpetrators must be prosecuted and punished.

Within Our Lifetime (“WOL”):  WOL chairperson Nerdeen Kiswani urges targeting Jews (as shown in Canary Mission video), saying:  “The Jewish National Fund and the Jewish Communal Fund: They are Zionist organizations hiding behind Judaism.  So every single [Jewish] organization on that list is a legitimate target.”

WOL also posted a map entitled “Globalize the Intifada Zone of Operations” showing the location of Jewish groups, clubs, etc. in New York City, along with a statement:  “Organizations to target in the future . . .” (reprinted in the Canary Mission video). 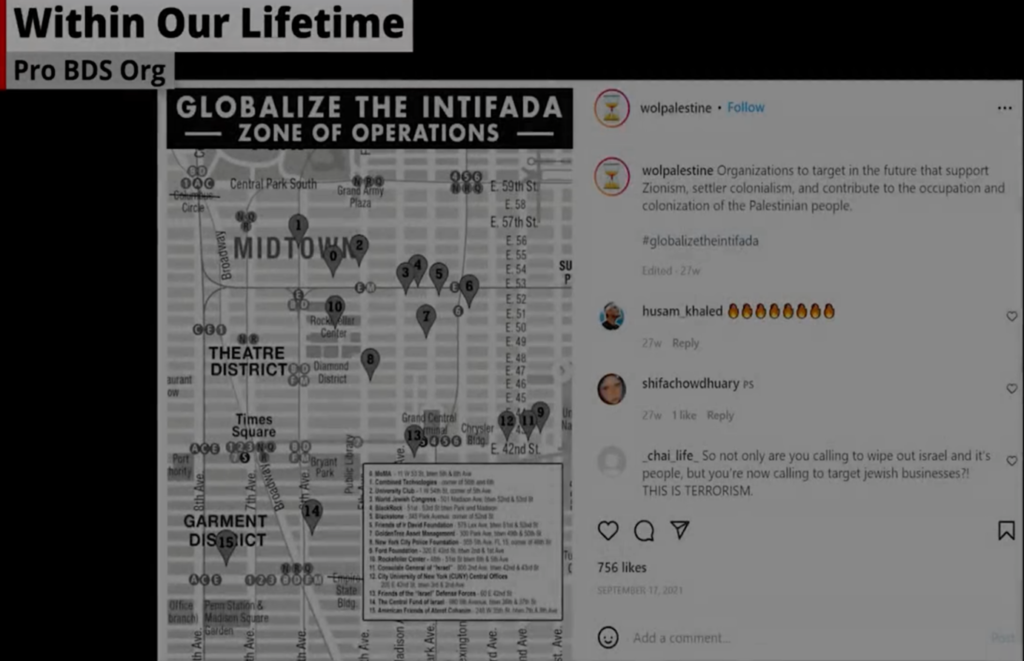 WOL targeted Jews in the United States prior to the recent Mapping Project report.  In a WOL video on YouTube (approximately 45 seconds into the video), leader Nerdeen Kiswani tells a crowd, as they burn an Israeli flag in front of Rockefeller Center in New York City: “The most notorious Zionists in this country, they’re right here in our city.  We marched today, we took over the streets and we visited multiple Zionist settler foundations.  Multiple.  We let them know we know where they’re at. We know where they work.  We’re gonna find out more about where they’re at too. And we’re gonna go after them.”[1]

A WOL rally in Brooklyn, New York in May 2021 again made it clear that “resistance” means violence, and called for this to go “global.”[1]  “Existence Is Resistance” leader Nancy Mansour led chants calling for “resistance” and stated: “Every single person, who says that we shouldn’t be calling for resistance, that we shouldn’t be calling for violence, well then stand the f*ck up!”  WOL leader Nerdeen Kiswani led the chant: “New York to Gaza, Globalize the Intifada . . . With our spirit and our blood, we will redeem you, oh Palestine!”

The “Intifada” is the terror war to murder Jews.  In Israel, Palestinian Arab terrorists murdered or maimed approximately 10,000 innocent Jews in Intifadas, by bombing civilian buses, pizza parlors full of children, Passover Seders full of Holocaust survivors and elsewhere; and with car ramming, knifing and shooting attacks.  WOL is openly seeking to spread this horror to Jews throughout the United States and the world. 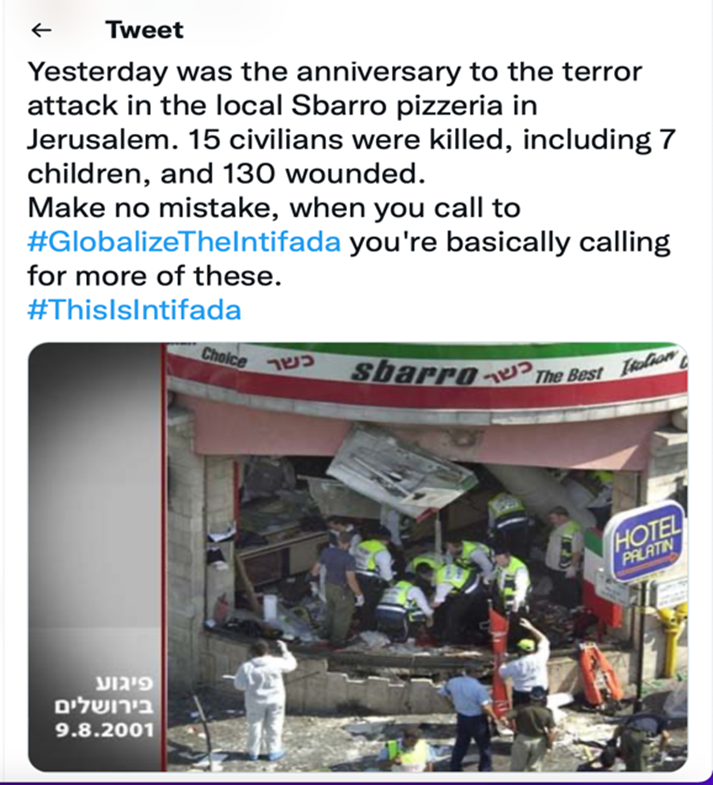 “Decolonize This Place / Israel in New York” posted (as shown in the Canary Mission video): “Find targets nearby.  Find where these Zionist fools live, and where there [sic] offices are, and act!” 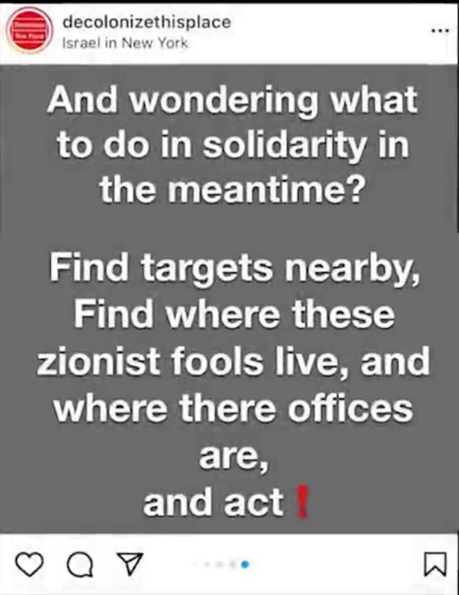 At the May 2021 WOL rally calling for violence, “Decolonize This Place” leader Marc Saffore urged: “Where is the World Jewish Congress?  Right here in New York City. New York City is full of Palestine related targets.  So again I ask, how do we strike back where we are now?  The options are endless.“

#decolonizethisplace also posted on Instagram on May 14, 2022: “There is Only One Solution: Intifada, Revolution.” 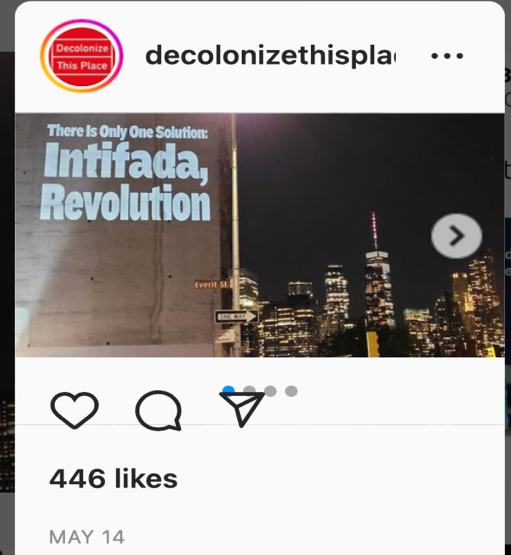 Al-Awda (Palestinian Right of Return Coalition):  As shown in Canary Mission’s video, Al-Awda founder Lamis Deek urges:  “I think that we need to take responsibility for the Zionists in our communities.  And we need to start finding them, identifying them. . . ”   Deek has a long history of promoting the murderous Intifada, glorifying violence and supporting U.S.-designated foreign terrorist organizations, including Hamas and Palestinian Islamic Jihad.[1]

At a WOL rally in Time Square on November 15, 2019, celebrating Palestinian Islamic Jihad’s launch of 190 rockets into Israel, Al-Awda activist Husam Kaid and WOL’s Nerdeen Kiswani led chants of “Intifada!  Intifada!  There is only one solution! Intifada, Revolution!”  Kaid added:  “The intifada does not have to be in Gaza or Palestine!  We are going to have an intifada in every classroom!  We are going to have an intifada on every college campus!”[2]

Canary Mission documents even more about the hatred and violence that these and similar hate groups and their leaders are promoting and inciting at https://canarymission.org/.

Combating Jew-Hatred Needs to Be a Top Law Enforcement Priority

This situation is frightening and intolerable and must be addressed.  We urge you to make combating Jew-hatred a top priority.  Please thoroughly investigate the “Mapping Project” and the other groups and their leaders identified in this letter, who are openly targeting, and promoting and inciting violence against Jews.  Prosecute them to the fullest extent of the law as supported by the evidence.  Monitor these groups and their leaders closely and shut these groups down.  Please also produce a full and transparent report on your findings and activities.  It should go without saying that Jews and Jewish institutions in this country should not have to continue enduring threats, worry and fear.  Please use all the tools at your disposal to ensure that American Jews and Jewish institutions can exist and thrive without risk of being targeted for harassment, intimidation or violence.

Thank you for your diligent work and attention to this matter.  Please direct responses and requests for further information to ZOA National President Morton A. Klein at mklein@zoa.org   Please consider us a resource; we are here to help.

View the Letter as a PDF Here.

We would love to hear from you! Please fill out this form and we will get in touch with you shortly.
Trending Z
Uncategorized June 14, 2022
FLASH: ISRAEL-JORDAN PEACE TREATY (1994) GUARANTEES JEWS ACCESS TO THE TEMPLE MOUNT – LET MY PEOPLE PRAY
Uncategorized June 14, 2022
ZOA Analysis: Most American Rabbis Who Are Boycotting Some Israeli Ministers Are From Extremist Left Wing Groups (J Street; T’ruah; JVP)
Uncategorized June 14, 2022
Israel’s “Right of Return” Grandparent Clause is De-Judaizing the Jewish State – Eliminate It
Uncategorized June 14, 2022
Exclusive: ZOA Accuses Ilhan Omar of Hating the U.S. ‘as Much as Israel,’ Lauds Kevin McCarthy for ‘Throwing Her Off the HFAC’
Center for Law & Justice
We work to educate the American public and Congress about legal issues in order to advance the interests of Israel and the Jewish people.
We assist American victims of terrorism in vindicating their rights under the law, and seek to hold terrorists and sponsors of terrorism accountable for their actions.
We fight anti-Semitism and anti-Israel bias in the media and on college campuses.
We strive to enforce existing law and also to create new law in order to safeguard the rights of the Jewish people in the United States and Israel.
Our Mission
ZOA STATEMENT
The ZOA speaks out for Israel – in reports, newsletters, and other publications. In speeches in synagogues, churches, and community events, in high schools and colleges from coast to coast. In e-mail action alerts. In op-eds and letters to the editor. In radio and television appearances by ZOA leaders. Always on the front lines of pro-Israel activism, ZOA has made its mark.
Connect with us
Sign up for our Newsletter