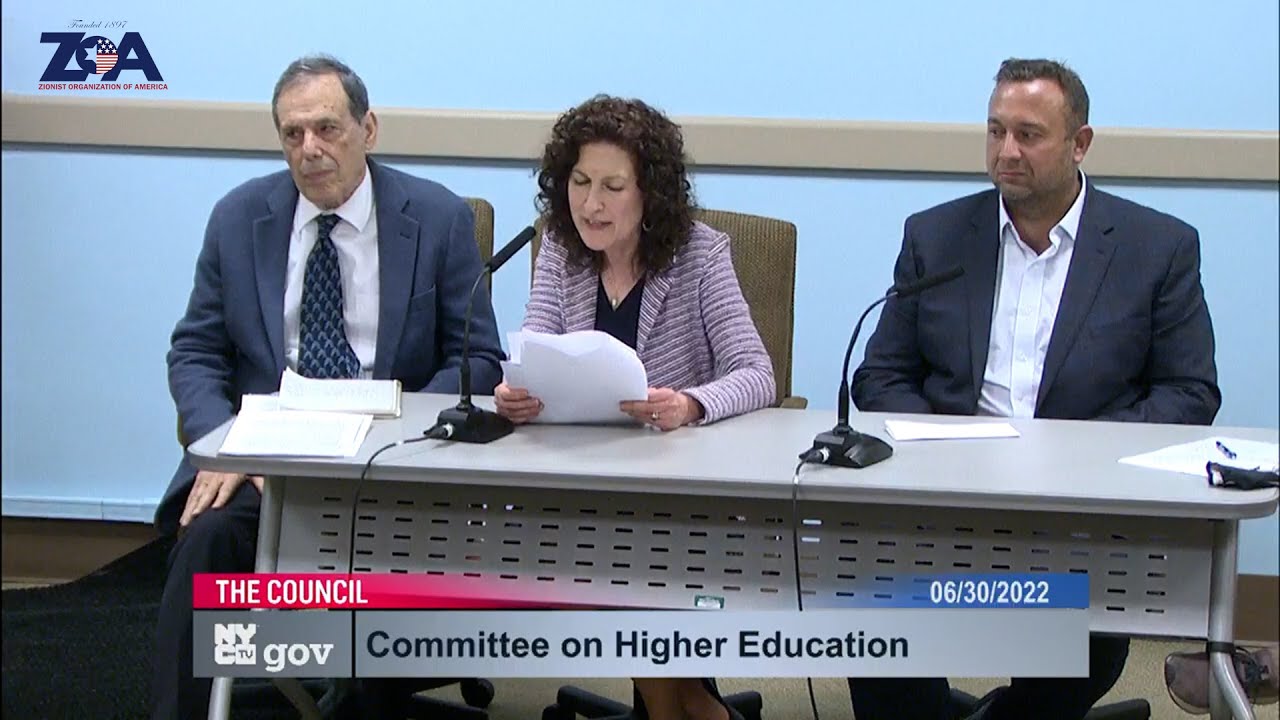 (SUNDAY, JULY 3, 2022 / HAMODIA) New York City’s Committee on Higher Education held a hearing June 30 to discuss antisemitism and anti-Israel bias among City University of New York faculty and students, organized by city Councilmembers Inna Vernikov (R), Eric Dinowitz (D), and attended by Councilman Kalman Yeger (D). Noticeably absent was CUNY Chancellor Felix Matos Rodriguez, who gave a late notice that he was not able to attend. While originally scheduled for June 8, the hearing was pushed off to June 30 to accommodate Matos Rodriguez. The Chancellor has not provided an explanation for his absence. He sent representatives; two vice chancellors and the president of the graduate center, who only granted the committee virtual appearances. The glaring absence of Matos Rodriguez was discussed at length. “They (CUNY officials) are not here in this room to listen to the painful testimony of the teachers and students who have experienced pervasive, ongoing discrimination and antisemitism at school,” Inna Vernikov said at the start of the hearing. “The Chancellor’s not showing up today is perpetuating the antisemitism that we’re here to explore. There’s been no accountability at CUNY, no one’s being held responsible for what’s going on all over our city and our state. My question is, would the same thing happen if this was a discussion of any other ethnic minority?” she continued. The seven hour-long hearing featured testimonies from students and faculty decrying what they say is the increasingly hostile and intolerant culture in CUNY schools for Israeli and Jewish students, and a deep bias in the way faculty present Israel in relation with other countries when discussing human rights issues. While Rodriguez has publicly rejected CUNY’s adoption of the Boycott, Divestment and Sanctions movement, many CUNY organizations have made public statements denouncing Israel, including the Professional Staff Conference – a union of 30,000 CUNY teachers and staff. While stopping short of boycotting, the union declared that CUNY should have “discussions” to determine such a decision.

CUNY School of Law’s student and faculty associations have accepted BDS platforms in their entirety. Former Governor Andrew Cuomo signed an executive order in 2021, upheld this year by Governor Kathy Hochul, requiring all state-funded entities to divest from BDS-supporting companies; as it is state-funded, CUNY would not be permitted to support the movement.

On May 30 2022, Matos Rodriguez released a statement reiterating his comments made in December 2021. “CUNY does not support and to be clear cannot participate in BDS activities, and is required to divest public funds from any companies that do. These organizations speak for themselves and the opinions or positions they express are entirely theirs and do not represent the views of CUNY or those of the University community as a whole.” Jeffery Lax, an Orthodox professor at Kingsborough Community College, and over 250 other union members, resigned from the union after it condemned Israel and pushed for a BDS platform. He also filed a discrimination complaint against CUNY, citing consistent “religious discrimination, retaliation, and hostile work environment taken against observant Jews and Zionist Jews, including me.” At the hearing, Brooklyn College Professor David Brodsky quoted an email from the Working Group on Racism and Colonialism which was sent to all CUNY members regarding the Israeli-Palestinian conflict: “There are not multiple perspectives on this topic. There is only resistance or complicity to(sic) genocide.” He also spoke about a jarring incident in which a professor reportedly would not grant a student a letter of recommendation until they stated their opinion on Israel. Brodsky said that in the current climate, Jews have a “fear of coming to campus.” Vernikov grilled the President of the PSC, James Davis, on his remarks in support of BDS. When asked if he supports the movement, Davis said “I don’t think that’s relevant to this hearing.” Vernikov told him of a video circulated on social media wherein he says he voted for BDS in some capacity, to which he responded, “I’m not aware of that video.”

Davis is seen on video saying, “I Have my own personal views on Israel-Palestine…I was a member of the American Studies Association in 2013…that vote, about BDS…voted in favor there.” Vernikov called on CUNY to adopt the International Holocaust Remembrance Alliance’s definition of antisemitism, which includes disproportionately targeting Israel for criticism, boycotts, and sanctions. Hochul has taken steps towards accepting the IHRA definition.

Former and present students had an opportunity to share their experiences with antisemitism. Joshua Greenberg, a Baruch College student, said he was assaulted for being a “Jewish, disabled student,” and said that his prayers had been restricted.

Tzvia Waronker, a third-year student at John Jay testifies that “I was cornered in a stairway and told not to tell that I was Jewish.”

Susan Tuchman, Esq., of the Zionist Organization of America said, “At a rally to protest tuition rises, Jewish students were threatened…one student threatening to light someone on fire because they wore a sweatshirt in support of Israel.”

That student, who threatened to murder a Jew, was Nerdeen Kiswani – she was selected by CUNY School of Law’s student body to deliver this year’s commencement speech at graduation.

This wasn’t the first time she had incited violence.

“Kiswani has previously called for the “death of Zionists” and Israel’s destruction,” Vernikov said. “The content of her speech is similar to displays of Nazi propaganda that can be found in Yad VaShem, Israel’s major Holocaust museum.” While not part of CUNY, Former NYU student Adela Cojab Moadeb said that her alma matter became “very unsafe for Jewish students” where pro-Palestinian supporters “equated Zionism with Nazism” and students were exposed to the burning of the Israeli flag. Tammi Rossman-Benjamin from the AMCHA antisemitism awareness group said that “schools with academic BDS supporting faculty have a times times more likely chance to have harassment of students that support Israel.” Her organization has logged more than 150 antisemitic incidents at 11 CUNY campuses since 2015.

CUNY Professor Azriel Genack, who teaches physics at Queens College and is a leader of the CUNY Alliance for Inclusion, told Hamodia that often the hostility comes in more subtle forms. When last year’s valedictorian of Baruch College gave a speech on Zoom, and mentioned that her grandparents were Holocaust survivors, “the screens lit up with ‘free Palestine’ imagery…she was brought to tears at her own graduation.“

Genack also explained the double-standard CUNY and other academic organizations have when it comes to Israel and other countries. While demonizing and calling for a mass boycott of Israel, the PSC union states regarding Russia’s brutal invasion of Ukraine: “As educators, we value communication, dialogue, and mutual understanding as modes for resolving conflict, and we hold out hope that diplomacy and an avoidance of escalation can help bring an end to this war.”

Genack says that many students don’t want to “expose themselves” as being Jewish, for fear of confrontation.

He says that the anti-Israel sentiment has a grip on American culture, and it’s very difficult to tell students that the culture that they live in is fundamentally biased.

“It’s the culture and it’s very hard to fight against it. We need to explain that the New York Times doesn’t tell a story; it has a narrative about “Israeli oppression”…it’s never about the violence against Israel or the fact that Palestinians have never accepted any partition or peace plan where Israel is left standing as a nation. It’s hard to explain the situation to people who believe the New York Times is the “gold standard” – how do you fight this?”

This article was originally published in Hamodia and can be viewed here.

We would love to hear from you! Please fill out this form and we will get in touch with you shortly.
Trending Z
News July 4, 2022
Biden’s Policies Voiced at Israeli and Palestinian Mtgs. Demanding Israel Return to ‘67 “Auschwitz” Lines, End Checkpoints, Open Jerusalem Arab Consulate – and More – Show Biden’s No Friend to Israel
Uncategorized July 4, 2022
Newsweek: The ADL Has Corrupted Its Mission and Betrayed the Jewish Community
Multimedia July 4, 2022
Amb. David Friedman: Biden’s Hostile-to-Israel Statements/Actions Make Mideast Trip a Failure
News July 4, 2022
Biden Visit ‘Despicable, Disastrous’ Flag-Waving Failure | The Daily Wire
Center for Law & Justice
We work to educate the American public and Congress about legal issues in order to advance the interests of Israel and the Jewish people.
We assist American victims of terrorism in vindicating their rights under the law, and seek to hold terrorists and sponsors of terrorism accountable for their actions.
We fight anti-Semitism and anti-Israel bias in the media and on college campuses.
We strive to enforce existing law and also to create new law in order to safeguard the rights of the Jewish people in the United States and Israel.
Our Mission
ZOA STATEMENT
The ZOA speaks out for Israel – in reports, newsletters, and other publications. In speeches in synagogues, churches, and community events, in high schools and colleges from coast to coast. In e-mail action alerts. In op-eds and letters to the editor. In radio and television appearances by ZOA leaders. Always on the front lines of pro-Israel activism, ZOA has made its mark.
Related Articles
OP-ED BY: Morton Klein, ZOA National President, and Susan Tuchman, Esq., Director, ZOA's Center for Law and Justice ZOA to UNC-Asheville: Cancel Farrakhan-Loving, Israel-Hating Tamika Mallory Keynote

Read ZOA’s Letter to UNC Asheville here, or by clicking the preview below: