ZOA today proudly joined with four Israeli NGOs to advocate for Israel’s Security and Sovereignty in Jerusalem and the Jordan Valley. A poster was released with the headline – “DON’T SELL US OUT!” and pictures of President Biden and Prime Minister Lapid. Many Nationalist/Zionist camp Israelis and their American supporters, including the ZOA, are concerned about the upcoming visit of President Biden to Israel and the implications for Israel’s sovereignty in the Jordan Valley and Jerusalem.

“The sovereignty of Israel over Jerusalem and the Jordan Valley is completely legally, religiously and morally settled. President Donald Trump, Israel’s greatest friend in the White House ever, made that clear in terms of American policy and belief. Nothing that President Biden does or says during his upcoming visit to Israel should be used to justify casting doubt on the Jewish state’s sovereignty in any part of the land of Israel. We are proud to join with these patriotic Israeli NGOs to point out this obvious fact. ZOA is also working with members of Congress to ensure that the administration gives due regard to Israeli sovereignty issues during his visit.”

The other groups joining with ZOA are Regavim, a movement dedicated to the protection of Israel’s national lands and resources, ‘Ad Kan,’ an organization of former IDF intelligence officers dedicated to fighting international anti-Israeli funding within Israel, IDSF/Habithonistim – Israel’s Defense & Security Forum, the Sovereignty Movement affiliated with “Women in Green,’ and Im Tirtzu, an organization working to strengthen the values of Zionism. 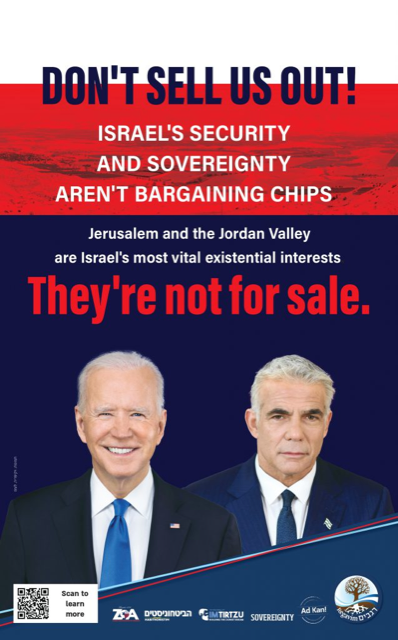 We would love to hear from you! Please fill out this form and we will get in touch with you shortly.
Trending Z
News July 7, 2022
Biden’s Policies Voiced at Israeli and Palestinian Mtgs. Demanding Israel Return to ‘67 “Auschwitz” Lines, End Checkpoints, Open Jerusalem Arab Consulate – and More – Show Biden’s No Friend to Israel
Uncategorized July 7, 2022
Newsweek: The ADL Has Corrupted Its Mission and Betrayed the Jewish Community
Multimedia July 7, 2022
Amb. David Friedman: Biden’s Hostile-to-Israel Statements/Actions Make Mideast Trip a Failure
News July 7, 2022
Biden Visit ‘Despicable, Disastrous’ Flag-Waving Failure | The Daily Wire
Center for Law & Justice
We work to educate the American public and Congress about legal issues in order to advance the interests of Israel and the Jewish people.
We assist American victims of terrorism in vindicating their rights under the law, and seek to hold terrorists and sponsors of terrorism accountable for their actions.
We fight anti-Semitism and anti-Israel bias in the media and on college campuses.
We strive to enforce existing law and also to create new law in order to safeguard the rights of the Jewish people in the United States and Israel.
Our Mission
ZOA STATEMENT
The ZOA speaks out for Israel – in reports, newsletters, and other publications. In speeches in synagogues, churches, and community events, in high schools and colleges from coast to coast. In e-mail action alerts. In op-eds and letters to the editor. In radio and television appearances by ZOA leaders. Always on the front lines of pro-Israel activism, ZOA has made its mark.
Connect with us
Sign up for our Newsletter