On August 29-31, 2022, exactly 125 years after the founders of the Zionist Organization of America (ZOA) represented American Jewry at the inspirational First World Zionist Congress convened by Dr. Theodor Herzl in Basel, Switzerland, the ZOA is revisiting Basel and participating in the WZO’s 125th year gala celebration. At the WZO anniversary plenary event, in front of 1,200 attendees from all over the world, ZOA National President Morton A. Klein and ZOA were honored with an award for Mr. Klein’s many decades of, and ZOA’s 125 years of, outstanding efforts helping and defending Israel the Jewish people. Our dear friend and supporter, philanthropist and distinguished physician Dr. Miriam Adelson, WZO Chair Yaakov Hagoel and TV Anchor Hila Korach presented the award to ZOA President Morton Klein, following a beautiful, heartfelt substantive speech by Dr. Miriam Adelson. Dr. Adelson also told Morton Klein that ZOA must continue to do ZOA’s important, sacred work on behalf of the Jewish state of Israel.

In addition, on the preceding Shabbat, Morton Klein was given another great honor – the “Herzl Aliyah” (the 5th Aliyah) – the very same Aliyah given to Dr. Theodor Herzl at the Great Synagogue in Basel exactly 125 years ago, when Dr. Herzl prayed there for the success of Zionism and the First Zionist Congress.

After the First World Zionist Congress, Dr. Theodor Herzl wrote “at Basel, I founded the Jewish State.” The dedicated, enthusiastic American delegation to the First World Zionist Congress founded ZOA as the Federation of American Zionists in 1897, and changed our organization’s name to the Zionist Organization of America in 1917. The first Jewish Supreme Court Justice, Louis Brandeis, and Rabbi Abba Silver previously served as presidents of the ZOA. Today, the ZOA is the oldest Zionist organization in the United States, as well as the leading major American Jewish organization courageously defending Israel and the Jewish people; and fighting against all forms of antisemitism.

ZOA National President Morton Klein stated: “I’m so proud that ZOA participated in the First World Zionist Congress, and worked so hard to carry out its goals. I am so honored by the award given to me and the ZOA, and to celebrate and carry out the vision of my predecessors and all the men and women from around the world who came together 125 years ago to lay groundwork for the State of Israel’s miraculous rebirth in the Jewish people’s ancestral, indigenous homeland.

“I also must thank ZOA’s extraordinary, committed staff and supporters for all they do to carry out Herzl’s vision; defending and supporting Israel and Jewish people.”

The First World Zionist Congress determined to re-establish the Jewish homeland “secured under public law.” ZOA played an instrumental role in fulfilling that goal, and helped to obtain the binding international agreements that continue to guarantee the Jewish people’s legal rights to the land of Israel. Today, ZOA continues to promote and educate the public about the Jewish people’s rights to Israel, including Judea-Samaria and Israel’s eternal undivided capital Jerusalem (see ZOA Summary of Israel’s binding, guaranteed international legal rights here) and the heinous Nazi-like policies of Israel’s enemies, including the Palestinian Authority, Hamas, Hezbollah and Iran.

ZOA President Morton Klein also appreciatively noted that the largest delegation to the First World Zionist Congress came from Russia – and that many Russian-American Jews are now part of ZOA and the ZOA Coalition.

In addition, ZOA President Morton Klein and ZOA Director of Research & Special Projects Liz Berney, Esq. spoke at a meeting of World Likud delegates from throughout the world. Mr. Klein explained that in order to counter Israel-hatred and Jew-hatred, Jewish groups in Israel, America and throughout the world need to explicitly expose the truth about the monstrous antisemitic actions of the Palestinian Authority regime, including paying Arabs to murder Jews and honoring and glorifying Jew-killers by, among other things, naming schools, streets and sports teams after them. If people learn the truth, they will not want to support the Palestinian Arab Israel-hating Jew-murdering cause. Ms. Berney spoke about the need to develop more twin cities relationships between the Diaspora and Jewish communities in Judea and Samaria. 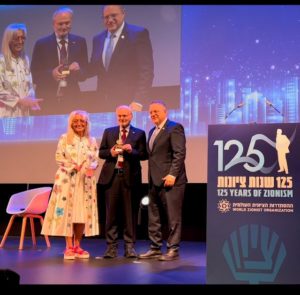 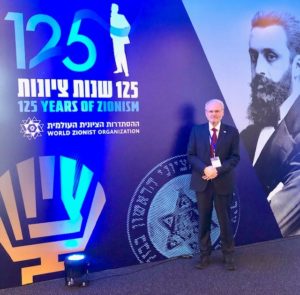 ZOA National President Morton A. Klein at the 125th Anniversary Celebration of the First World Zionist Congress in Basel, Switzerland

We would love to hear from you! Please fill out this form and we will get in touch with you shortly.
Trending Z
Uncategorized August 29, 2022
ZOA Analysis: Most American Rabbis Who Are Boycotting Some Israeli Ministers Are From Extremist Left Wing Groups (J Street; T’ruah; JVP)
Uncategorized August 29, 2022
ZOA: Israel’s Reasonable Judicial Reform Proposals Are Good for Democracy, the Rule of Law and the Economy
News August 29, 2022
ZOA is Disappointed, Offended and Frightened by 211 U.S. House Votes Supporting Jew-Hating, Israel-Hating Rep. Ilhan Omar
Uncategorized August 29, 2022
Israel’s “Right of Return” Grandparent Clause is De-Judaizing the Jewish State – Eliminate It
Center for Law & Justice
We work to educate the American public and Congress about legal issues in order to advance the interests of Israel and the Jewish people.
We assist American victims of terrorism in vindicating their rights under the law, and seek to hold terrorists and sponsors of terrorism accountable for their actions.
We fight anti-Semitism and anti-Israel bias in the media and on college campuses.
We strive to enforce existing law and also to create new law in order to safeguard the rights of the Jewish people in the United States and Israel.
Our Mission
ZOA STATEMENT
The ZOA speaks out for Israel – in reports, newsletters, and other publications. In speeches in synagogues, churches, and community events, in high schools and colleges from coast to coast. In e-mail action alerts. In op-eds and letters to the editor. In radio and television appearances by ZOA leaders. Always on the front lines of pro-Israel activism, ZOA has made its mark.
Connect with us
Sign up for our Newsletter