Morton Klein, president of the Zionist Organization of America, bestowed its Theodor Herzl Medallion on the 45th U.S. president for his achievements on behalf of Israel and world Jewry. 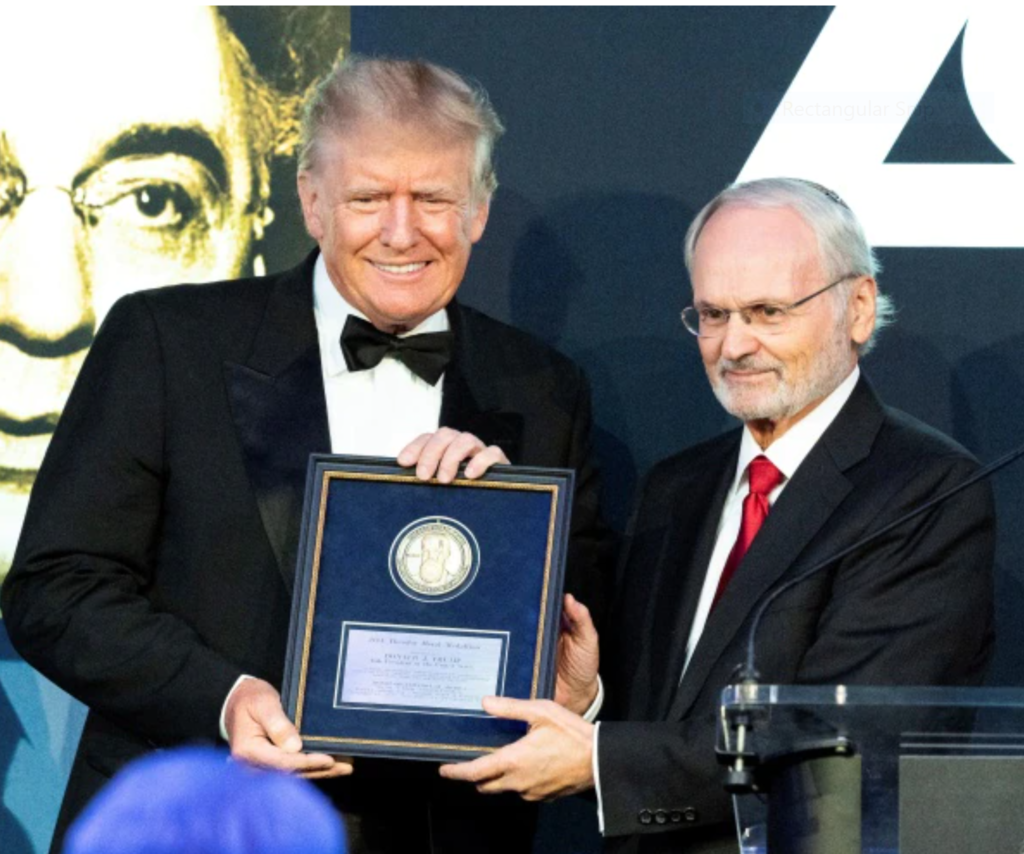 Those achievements, outlined by Klein to thunderous applause, included signing an executive order to extend protection under Title VI of the 1964 Civil Rights Act (banning discrimination based on race, color or national origin) to Jewish and pro-Israel students on college campuses; and reversing “discriminatory labeling”—a reference to the Trump administration’s regulation allowing products manufactured by Israelis in Judea and Samaria to be labeled “made in Israel.”

The ZOA head continued with his enumeration of Trump’s achievements: signing into law the Taylor Force Act, which reduced financial aid to the Palestinian Authority so long as it continued to pay stipends to terrorists and the families of slain terrorists who murdered Israelis or Americans; allowing Americans born in Jerusalem to list Israel as their place of birth on their passports; moving the U.S. embassy from Tel Aviv to Jerusalem; recognizing Israeli sovereignty over the Golan Heights; withdrawing from the Iran nuclear deal; and forging the Abraham Accords between Israel and four Arab nations: the United Arab Emirates, Bahrain, Morocco and Sudan.

Klein also praised Trump’s appointment of “the greatest friends of Israel to important posts affecting U.S.-Israel relations” and his being “the first U.S. president, ever, to pray at the holy Western Wall.”

Completing his introduction, Klein said, “For all of these reasons, and for the Abraham Accords, Mr. President, you deserve, unquestionably, the Nobel Peace Prize for your extraordinary work. But it is my honor and my privilege to present to you the 45th president of the U.S., Donald J. Trump.”

The ZOA, which celebrated its 125th anniversary Sunday, rarely awards the Herzl Medallion. Past recipients include Winston Churchill and Arthur Balfour.

Chants of “Four more years!” rang out as Trump entered the banquet room at the Chelsea Piers Sports & Entertainment Complex.

He read from an essay by Herzl about his vision of a Jewish state. Trump then told those assembled, “Half a century later, after the Jewish people have endured and persevered through the bottomless evils of the Nazi Holocaust, that dream finally came true.

“It was a big dream and it came true….Today the State of Israel stands as a living tribute to the unbreakable spirit of the Israeli people and the glory of Almighty God. What an achievement.”

He spoke of the U.S.-Israel alliance.

“The U.S. and Israel are not just allies on a military basis but economically and politically. We are allies morally, culturally and spiritually, and we always will be—at least if I have anything to do about it.”

“We have some people in this country that happen to be Jewish that are not doing the right thing for Israel, you know that, too many,” he said. “Just as you [Klein] were saying how much we’ve done, as you know the Democrats get 75% of the [Jewish] vote, which is hard to believe, right? We can’t let that continue. I think we’re going to have to listen to Mort and David [Schoen, Trump’s personal attorney]…do a little speaking I think, we’re going to have to give a little a lecture…you understand what I mean…when you see all of the horrible things that have taken place with Biden and Barack Hussein Obama, and then they get 75% of the vote. What the hell is going on here, Mort?”

Later in his speech, discussing the relocation of the U.S embassy to Jerusalem, Trump said, “Lots of great Jewish people, they felt it was a miracle. And you know who else? Evangelicals. You have great allies.”

He criticized the United Nations for singling out Israel and neglecting peace-making efforts, including regarding the Ukraine war.

“A deal could’ve been made so easily [between Russia and Ukraine] if I’d been president….If I were president the Russian invasion of Ukraine never would’ve happened. But the United Nations should be doing this stuff….I know President Putin very well. I know President Zelensky very well. Great relationship with him….What a shame to see all these people dying, and the numbers are far greater than what you hear.”

Trump warned of the need to remain vigilant as the number of anti-Israel members of Congress grows.

Opposing the Iran deal was the single most important thing he did for Israel, he said. He linked his election loss to increased danger to Israel from Iran.

“I imposed the toughest-ever sanctions on the Iranian regime and we would have had an incredible deal worked out, but we had an election which was far better than my first run, we did much better, we got many millions of more votes, we got more votes than any sitting president…in history, you know that very well. And something screwy with our elections…because of that we’re now in another bad position…

“What has taken place in a short period of time is…incredibly bad for Israel.”

Trump spoke of an “important announcement” he would be making “on Tuesday.”

Dr. Miriam Adelson, a donor to conservative and pro-Israel causes, announced the former president via Zoom, speaking of “the countless Israelis and Americans who held and still hold you dear and the countless more who will be born into the better world that you made. May you forever feel that warmth in your heart when you wear the Theodor Herzl medallion over it, Mr. President. God bless you and keep you.”

At one point, ZOA board chairman David Schoen asked Holocaust survivors and their descendants to stand and be recognized. Several dozen persons stood, to booming applause. Then he asked those who have served in the Israel Defense Forces to stand, and they received the same applause.

Iranian pro-Israel activist Ali Meli, who was also among those honored at the gala, said, “It is my great honor to dedicate it to the many Iranians who have risen up to oppose extremist ayatollahs.”

Meli received a standing ovation after thanking Trump for his “impeccable judgment” and “decisive intervention” in ordering the killing of Iranian Revolutionary Guard Corps terrorist mastermind Qasem Soleimani in January 2020.

Michele Bachmann, a former Minnesota Congresswoman and Republican presidential candidate, told JNS, “I’m highly honored to be here with the ZOA. They say what no one else is willing to say.”

“I admire what President Trump did in office,” said James Kahn, a financial adviser from Philadelphia who traveled to New York for the event. “I’m also sympathetic to the idea that he has hurt the Republican Party, especially recently toward [Florida Governor] Ron DeSantis…We shouldn’t badmouth each other.”

He added, “President Trump is a great man with tragic flaws. I love him, and a case can be made he cost the Republicans a few elections….He’s not the messiah and it’s not healthy for people to believe he’s the only one who can lead.”

Kahn said he came to show his support for Trump’s “concrete achievements.”

Julie Tigay, a second-grade teacher from Detroit, came to the ZOA gala because her father-in-law was being honored and because “it’s good to be among like-minded people, who care about something near and dear to us, who see the big picture.”

“I feel grateful, as a Jewish woman, for what President Trump has done for Israel,” said Estee Horowitz of Crown Heights in Brooklyn.

“Families bicker until there’s an external threat; then they come together,” said Dr. Harvey Risch, an epidemiologist from Connecticut. Risch believes that in the realization of the Abraham Accords, “that concept was recognized and applied.”

“To get it done, in a timely and effective way, was groundbreaking,” said Jay Miller of Palm Beach, Florida.

“President Trump in his special way of helping the interests of Israel challenges us on how we need to be Zionists, because sometimes he seems more Zionist than us,” said Lt. Col. (res.) Yaron Buskila from Nitzan, which is situated between Ashdod and Ashkelon. Buskila, who is director of operations for the Israel Defense and Security Forum (ISDF), cited the Abraham Accords and Trump’s efforts on behalf of Israeli “sovereignty in Judea and Samaria.”

“It felt amazing to have us all, young professionals and the older generation, in one room,” said Ainsley Koven of Manhattan. “When they said for survivors and their descendants to stand, we were united. And to have the [former] president of the United States there just cemented the feeling of solidarity.”

Rita Cosby, a correspondent for CBS’s “Inside Edition” and a former Fox News anchor, spoke with JNS at some length about what it meant to her to attend the ZOA event.

“My father was a Polish resistance fighter outside the Warsaw Ghetto in World War II,” said Cosby. “He saw the horrors of the Holocaust firsthand. It is deeply personal for me to support Israel, America’s greatest ally and one of the greatest defenders of freedom in the world. During this turbulent moment, it is even more important than ever to be here in support of the great State of Israel.”

We would love to hear from you! Please fill out this form and we will get in touch with you shortly.
Trending Z
News November 16, 2022
ZOA Deplores that Pres. Trump Dined with Jew-Haters Kanye West & Nick Fuentes, and Demands he Condemn Them
Uncategorized November 16, 2022
ZOA Honors Trump With Rarely Given Herzl Award for His Great Pro-Israel Work – Joins Ranks of Balfour, Truman, Begin, Meir, Ben-Gurion
News November 16, 2022
ZOA Responds to Questions About Pres. Trump, Kanye West, Fuentes, etc. Issue
Uncategorized November 16, 2022
Zionist Organization of America Honors Donald Trump for Support for Israel, Jewish Community
Center for Law & Justice
We work to educate the American public and Congress about legal issues in order to advance the interests of Israel and the Jewish people.
We assist American victims of terrorism in vindicating their rights under the law, and seek to hold terrorists and sponsors of terrorism accountable for their actions.
We fight anti-Semitism and anti-Israel bias in the media and on college campuses.
We strive to enforce existing law and also to create new law in order to safeguard the rights of the Jewish people in the United States and Israel.
Our Mission
ZOA STATEMENT
The ZOA speaks out for Israel – in reports, newsletters, and other publications. In speeches in synagogues, churches, and community events, in high schools and colleges from coast to coast. In e-mail action alerts. In op-eds and letters to the editor. In radio and television appearances by ZOA leaders. Always on the front lines of pro-Israel activism, ZOA has made its mark.
Connect with us
Sign up for our Newsletter