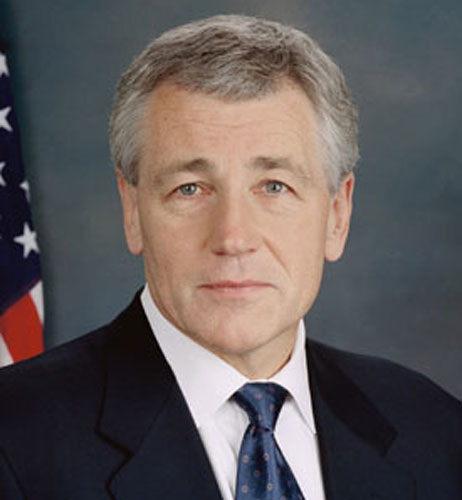 ZOA: Natl. Jewish Democratic Council Should Oppose Hagel Nomination As It Did In 2009
News Press Release

With President Barack Obama having nominated former Republic senator Chuck Hagel for Secretary of Defense, the Zionist Organization of America (ZOA) has criticized the National Jewish Democratic Council (NJDC) for its abject failure to stand by its convictions, expressed in 2009, opposing cabinet office for Hagel in any position with relevance to U.S./Israel relations.

The ZOA has called upon the NJDC to publicly and vigorously oppose Hagel’s nomination – especially now that the Washington Post has revealed that Hagel blamed Israel for Palestinian terrorism when he said in August 1998, “The Israeli government essentially continues to play games … Desperate men do desperate things when you take hope away. And that’s where the Palestinians are today” (Glenn Kessler, ‘Chuck Hagel and Israel in context: A guide to his controversial statements,’ Washington Post, January 7, 2013).

Following Chuck Hagel’s nomination this week, the NJDC issued a statement saying, “President Barack Obama’s unprecedented pro-Israel credentials are unquestionable, and setting policy starts and stops with the President. While we have expressed concerns in the past, we trust that when confirmed, former Senator Chuck Hagel will follow the President’s lead of providing unrivaled support for Israel – on strategic cooperation, missile defense programs, and leading the world against Iran’s nuclear program” (‘NJDC Reacts to Hagel Nomination,’ NJDC statement, January 7, 2013).

The NJDC, which has strongly defended President Obama’s policies towards Israel and the Middle East and denied that the President is hostile to Israel or ineffective in trying to prevent Iran from obtaining a nuclear weapons capacity, was strongly critical of Hagel in 2007 when he was considering a presidential run. It even issued a detailed list of his worrying voting record on Israel and the Middle East (see ‘Indecisive Senator Hagel has Questionable Israel Record,’ NJDC statement, March 12, 2007. An updated and more detailed account of Hagel’s record was issued last week by the ZOA and can be seen here).

Moreover, in 2009, after Hagel was named co-chairman of the President’s Foreign Intelligence Advisory Board, then-NJDC executive director Ira Forman “suggested that NJDC would publicly oppose Hagel’s nomination for a position with more authority. ‘If [Hagel] was taking a policy role, we’d have real concerns,’ Forman said. And Forman indicated that his group would oppose Hagel’s appointment to any position that had influence over U.S.–Israel relations” (Michael Goldfarb, ‘NJDC Chief Weighs in on Hagel Appointment (Update w/RJC in Response),’ Weekly Standard, October 29, 2009).

Also, in 2010, when there was speculation that President Obama might nominate Hagel at that juncture for Secretary of Defense in succession to Robert Gates, NJDC president and CEO David Harris said that Hagel’s “record frankly puts him at variance with the president’s own policies vis-a-vis Israel.” The same report also recorded a Democratic operative who campaigned for Obama in the Jewish community saying, “If he was in fact appointed, I would find his appointment difficult to reconcile with my views of the administration” (Adam Kredo, ‘“Bottom of class” Hagel’s bid draws frosty reception,’ Washington Jewish Week, September 1, 2010).

ZOA National President Morton A. Klein said, “Previously, the NJDC was willing to name and criticize in detail an anti-Israel political figure. It declared that it would oppose Chuck Hagel’s nomination for a cabinet post with bearing on U.S./Israel relations.

“But now that President Obama has nominated him for one of the most important of such posts, the NJDC dishonors its pledge to oppose his nomination. This is pure partisanship. The NJDC was only willing to call out Hagel and oppose him when he was a Republican senator.

“Indeed, the NJDC has consistently trumpeted President Obama as pro-Israel, ignoring or distorting a deeply worrying record on the subject.

“The NJDC should reverse itself without delay and publicly oppose Hagel’s nomination. If it fails to do so, one will be compelled to agree with Alana Goodman, writing in Commentary, that ‘allegiance to Obama overrides any principles the NJDC claims to have. Is there any better example of why not to listen to this group the next time it tries to argue Obama is the most pro-Israel president in the history of mankind?’”

We would love to hear from you! Please fill out this form and we will get in touch with you shortly.
Trending Z
Uncategorized January 9, 2013
ZOA Analysis: Most American Rabbis Who Are Boycotting Some Israeli Ministers Are From Extremist Left Wing Groups (J Street; T’ruah; JVP)
Uncategorized January 9, 2013
ZOA: Israel’s Reasonable Judicial Reform Proposals Are Good for Democracy, the Rule of Law and the Economy
Uncategorized January 9, 2013
Israel’s “Right of Return” Grandparent Clause is De-Judaizing the Jewish State – Eliminate It
News January 9, 2013
ZOA is Disappointed, Offended and Frightened by 211 U.S. House Votes Supporting Jew-Hating, Israel-Hating Rep. Ilhan Omar
Center for Law & Justice
We work to educate the American public and Congress about legal issues in order to advance the interests of Israel and the Jewish people.
We assist American victims of terrorism in vindicating their rights under the law, and seek to hold terrorists and sponsors of terrorism accountable for their actions.
We fight anti-Semitism and anti-Israel bias in the media and on college campuses.
We strive to enforce existing law and also to create new law in order to safeguard the rights of the Jewish people in the United States and Israel.
Our Mission
ZOA STATEMENT
The ZOA speaks out for Israel – in reports, newsletters, and other publications. In speeches in synagogues, churches, and community events, in high schools and colleges from coast to coast. In e-mail action alerts. In op-eds and letters to the editor. In radio and television appearances by ZOA leaders. Always on the front lines of pro-Israel activism, ZOA has made its mark.
Related Articles
OP-ED CIA Nominee Brennan Dismisses Radical Islam, Calls J’lem Al-Quds, Whitewashes Hizballah