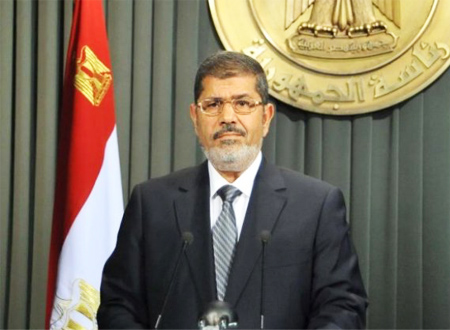 Egypt’s Morsi: “We Must Not Forget To Nurse Our Children And Grandchildren On Hatred Towards Zionists And Jews,” The “Descendants Of Apes and Pigs”
News Press Release

The Zionist Organization of America (ZOA) has condemned the despicable, anti-Semitic bile of Egyptian president and former Muslim Brotherhood senior official, Mohamed Morsi, and called upon the Obama Administration for the cancellation of an imminent U.S. arms package for Egypt of 20 F-16 aircraft and 200 Abrams tanks.

Nearly three years ago, Morsi said the following in a speech only recently unearthed, “Dear brothers, we must not forget to nurse our children and grandchildren on hatred towards those Zionists and Jews, and all those who support them. They must be nursed on hatred. The hatred must continue” (‘Egypt’s Morsi In 2010: Obama Insincere; We Must Nurse Our Children And Grandchildren On Hatred Of Jews Those Who Support Them,’ Middle East Media Research Institute (MEMRI), Special Dispatch No. 5138, January 16, 2013).

Additionally, in 2010 Morsi television interview also was unearthed last week, Morsi referred to “these occupiers of the land of Palestine … these blood-suckers, who attack the Palestinians, these warmongers, the descendants of apes and pigs [standard language for describing Jews] …We should employ all forms of resistance against them. There should be military resistance within the land of Palestine against those criminal Zionists … None of the Arab or Muslim peoples and regimes should have dealings with them … They must not be given any opportunity, and must not stand on any Arab or Islamic land. They must be driven out of our countries … We must all realize that resistance is the only way to liberate the land of Palestine” (‘Egyptian President Mohamed Morsi In 2010: No To Negotiations With The Blood-Sucking, Warmongering ‘Descendants Of Apes And Pigs’; Calls To Boycott U.S. Products,’ MEMRI, Special Dispatch No. 5118, January 4, 2013).

President Morsi resigned from the Brotherhood upon being elected president in May 2011 but was previously the Brotherhood’s official candidate for president and a veteran leader within the organization. He served as a member of the Brotherhood’s Political Bureau since 1992, when the Bureau was first established, and also later the Muslim Brotherhood’s Guidance Bureau. Morsi is also a founding member of the Brotherhood’s Committee to Fight the Zionist Project and has called Israel ‘the Zionist entity.’ Last October, Morsi was shown in an Egyptian Channel One Television broadcast of a sermon by a Egyptian cleric, fervent in payer as as the cleric said, “Oh Allah, destroy the Jews and their supporters. Oh Allah, disperse them, rend them asunder. Oh Allah, demonstrate Your might and greatness upon them. Show us Your omnipotence, oh Lord.”

Yet it is to this Egyptian regime headed by Morsi, the Brotherhood’s presidential candidate, that the Obama Administration is intending to give the finest U.S. war planes and tanks. As the International Business Times puts it, “The transaction will cost U.S. taxpayers $213 million, as the jets are part of the annual $1 billion military aid package to Egypt” (Maya Shwayder, ‘US Going Ahead With Sale Of F-16s To Egypt, Despite Protests,’ International Business Times, January 15, 2013).

ZOA National President Morton A. Klein said, “President Morsi’s vile anti-Semitic statements expose him and his Muslim Brotherhood-backed regime for what they are – virulent Jew-haters promoting jihad, hatred and terrorism against an Israel they hope to destroy.

“We are concerned that President Obama did not personally and publicly condemn this outrageous statement by the head of a U.S.-allied country and that words of condemnation by White House Press Secretary Jay Carney came only in response to a question in a press briefing.

“We are also disappointed that the U.S. senate delegation to Cairo, led by Senators John McCain (R-AZ) and Sheldon Whitehouse (D-RI) accepted the Morsi government’s ridiculous explanation that Morsi words were taken out of context and that all he had meant to do was to criticize Israeli policies.

“If, in fact, all Morsi wanted to do was to criticize Israeli policies, he should have name specific policies and criticized them, not embarked on a vicious anti-Semitic rant.

“As the record shows, the Muslim Brotherhood doesn’t merely hate Israel – which would be bad enough – it hates Jews. Indeed, it hates Israel because it is the Jewish state.

“Morsi’s repulsive reference to the ‘sons of monkeys and pigs’ is a term used throughout Muslim history by hateful Muslims about Jews. And Morsi’s other recently unearthed statements from 2010 shows he wishes to foster hatred against Jews.

“At a minimum, President Obama must immediately cancel this arms package to Cairo which would put top-of-the-line American planes and tanks into the hands of a vicious and dangerous regime.

“As we have said before, the U.S. should suspend all aid to Egypt until and unless Morsi gives a written commitment to observe the peace treaty with Israel; repudiate the Muslim Brotherhood platform and statements opposing peace, human rights and the Egyptian/U.S. alliance; and rescinds his pledge to work for freeing Islamist sheikh Omar-Abdel Rahman, jailed by the U.S. for his role in the 1993 World Trade Center bombing that killed six people.”

We would love to hear from you! Please fill out this form and we will get in touch with you shortly.
Trending Z
News January 18, 2013
ZOA Deplores that Pres. Trump Dined with Jew-Haters Kanye West & Nick Fuentes, and Demands he Condemn Them
Uncategorized January 18, 2013
ZOA Honors Trump With Rarely Given Herzl Award for His Great Pro-Israel Work – Joins Ranks of Balfour, Truman, Begin, Meir, Ben-Gurion
News January 18, 2013
ZOA Responds to Questions About Pres. Trump, Kanye West, Fuentes, etc. Issue
Uncategorized January 18, 2013
Zionist Organization of America Honors Donald Trump for Support for Israel, Jewish Community
Center for Law & Justice
We work to educate the American public and Congress about legal issues in order to advance the interests of Israel and the Jewish people.
We assist American victims of terrorism in vindicating their rights under the law, and seek to hold terrorists and sponsors of terrorism accountable for their actions.
We fight anti-Semitism and anti-Israel bias in the media and on college campuses.
We strive to enforce existing law and also to create new law in order to safeguard the rights of the Jewish people in the United States and Israel.
Our Mission
ZOA STATEMENT
The ZOA speaks out for Israel – in reports, newsletters, and other publications. In speeches in synagogues, churches, and community events, in high schools and colleges from coast to coast. In e-mail action alerts. In op-eds and letters to the editor. In radio and television appearances by ZOA leaders. Always on the front lines of pro-Israel activism, ZOA has made its mark.
Related Articles
OP-ED CIA Nominee Brennan Dismisses Radical Islam, Calls J’lem Al-Quds, Whitewashes Hizballah