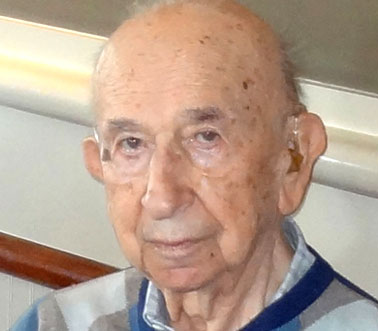 The Zionist Organization of America (ZOA) has expressed heartfelt condolences to the family of Jacques Torczyner, legendary Zionist leader and former president of the ZOA, who passed away Thursday night at the age 98.

Born in Belgium in 1914, Jacques Torczyner came to the U.S. in 1940, having escaped the Nazi invasion of Belgium. He became involved very quickly with the ZOA, of which he served as National President from 1968 until 1973. He was was Emeritus President of the ZOA until his passing.

ZOA National President Morton A. Klein said today, “Jacques Torczyner was a tireless and galvanizing figure in American Zionism. He was a leading and active member of every important Zionist committee, flying to Israel regularly.

“Born three years before the issuance of the Balfour Declaration, his life spanned the history of modern Zionism, in which he played an outsized role. He knew every Israeli prime minister, from David Ben Gurion to Shimon Peres and Yitzhak Rabin to Ariel Sharonand Benjamin Netanyahu. Jacques was close to all the leaders of Israel and many of the leading political figures in America.

“He had virtually no equal as an orator promoting Israel and the Jewish people. His remarkable oratorical gifts, in what was his second language (his first language having been French) are still remembered today by those who had the privilege of hearing him.

“But mostly, Jacques was a fabled supporter and champion of the ZOA. He was a close confidante of every ZOA president from Stephen Wise to Abba Hillel Silver to Rabbi Joseph Sternstein, Ivan Novick, Milton Shapiro and myself. The ZOA was the Jewish institutional love of his life. While living in New York, he attended every board meeting. Jacques was always thinking of ZOA and advising us in myriad ways to render our work still more effective.

“It was a great honor for me to call this great Jewish leader my friend. All of us at the ZOA and in the Jewish world salute him. We will miss him terribly. It is the passing of an era” said Morton A. Klein, president of the ZOA. “We extend our heartfelt condolences to his wonderful wife, Berthe, and all his family.”

We would love to hear from you! Please fill out this form and we will get in touch with you shortly.
Trending Z
News March 11, 2013
ZOA Condemns U.S. State Dept. & U.S. Amb. Nides For Siding with Antisemitic, Discriminatory Palestinian & Hamas Terrorists re: the Temple Mount, Violating Jews’ Religious Freedom
News March 11, 2013
ZOA’s Klein JPost Op-Ed: There is Nothing Extreme About Israel’s New Government
Uncategorized March 11, 2013
FLASH: ISRAEL-JORDAN PEACE TREATY (1994) GUARANTEES JEWS ACCESS TO THE TEMPLE MOUNT – LET MY PEOPLE PRAY
Uncategorized March 11, 2013
ZOA Analysis: Most American Rabbis Who Are Boycotting Some Israeli Ministers Are From Extremist Left Wing Groups (J Street; T’ruah; JVP)
Center for Law & Justice
We work to educate the American public and Congress about legal issues in order to advance the interests of Israel and the Jewish people.
We assist American victims of terrorism in vindicating their rights under the law, and seek to hold terrorists and sponsors of terrorism accountable for their actions.
We fight anti-Semitism and anti-Israel bias in the media and on college campuses.
We strive to enforce existing law and also to create new law in order to safeguard the rights of the Jewish people in the United States and Israel.
Our Mission
ZOA STATEMENT
The ZOA speaks out for Israel – in reports, newsletters, and other publications. In speeches in synagogues, churches, and community events, in high schools and colleges from coast to coast. In e-mail action alerts. In op-eds and letters to the editor. In radio and television appearances by ZOA leaders. Always on the front lines of pro-Israel activism, ZOA has made its mark.
Related Articles
OP-ED ZOA: Natl. Jewish Democratic Council Should Oppose Hagel Nomination As It Did In 2009