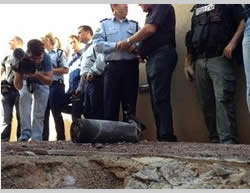 The American president’s visit to Israel and the Palestinian Authority was exploited by terrorists to launch five rockets from the Gaza Strip into Israeli territory. Two of the rocket landings were identified inside Israel; one of them hit a house in the southern Israeli city of Sderot. In response Israel temporarily closed the Kerem Shalom crossing and reduced the size of the fishing zone used by Gazans. The rocket barrage was the first of its kind since the end of Operation Pillar of Defense. A network in the Gaza Strip affiliated with the global jihad claimed responsibility for the rocket fire.

A number of Palestinians belonging to terrorist networks were apprehended in Judea and Samaria. One of them belonged to Fatah/Tanzim and its activities included throwing Molotov cocktails and shooting at Israelis. In addition, a group of young Palestinians was detained. They threw stones causing a car crash near the Judean city of Ariel in which seven Israelis were injured (one of them a three year-old girl, was critically injured).

Hamas’ Shura Council extended Khaled Mashaal’s term as chairman of the movement’s political bureau. While in Egypt, the Hamas leadership met with Raafat Shehata, director of Egyptian general intelligence. Among the topics discussed were the Hamas-Israel lull agreement, Hamas-Egypt relations and promoting the internal Palestinian reconciliation.

We would love to hear from you! Please fill out this form and we will get in touch with you shortly.
Trending Z
Uncategorized April 3, 2013
FLASH: ISRAEL-JORDAN PEACE TREATY (1994) GUARANTEES JEWS ACCESS TO THE TEMPLE MOUNT – LET MY PEOPLE PRAY
Uncategorized April 3, 2013
ZOA Analysis: Most American Rabbis Who Are Boycotting Some Israeli Ministers Are From Extremist Left Wing Groups (J Street; T’ruah; JVP)
Uncategorized April 3, 2013
Israel’s “Right of Return” Grandparent Clause is De-Judaizing the Jewish State – Eliminate It
Uncategorized April 3, 2013
Exclusive: ZOA Accuses Ilhan Omar of Hating the U.S. ‘as Much as Israel,’ Lauds Kevin McCarthy for ‘Throwing Her Off the HFAC’
Center for Law & Justice
We work to educate the American public and Congress about legal issues in order to advance the interests of Israel and the Jewish people.
We assist American victims of terrorism in vindicating their rights under the law, and seek to hold terrorists and sponsors of terrorism accountable for their actions.
We fight anti-Semitism and anti-Israel bias in the media and on college campuses.
We strive to enforce existing law and also to create new law in order to safeguard the rights of the Jewish people in the United States and Israel.
Our Mission
ZOA STATEMENT
The ZOA speaks out for Israel – in reports, newsletters, and other publications. In speeches in synagogues, churches, and community events, in high schools and colleges from coast to coast. In e-mail action alerts. In op-eds and letters to the editor. In radio and television appearances by ZOA leaders. Always on the front lines of pro-Israel activism, ZOA has made its mark.
Related Articles
OP-ED BY: HonestReporting.com UN Exonerates Israel in Gaza Child Death, Ignored by Media

Applause…               I am proud and privileged to welcome all of you here. Eight hundred devoted and committed Zionists whose love of Israel and the Jewish people is evident by the fact of your presence of simply being here. I want to especially welcome the over one hundred college students here tonight. Welcome future Jewish leaders […]