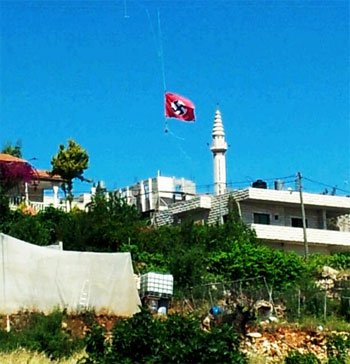 The Zionist Organization of America (ZOA) has pointed to the open Palestinian embrace of Nazi symbols like the swastika flag as but further evidence that Mahmoud Abbas’ Fatah/Palestinian Authority (PA) remains wedded to eliminating the Jewish state of Israel. Recently, in the Palestinian Arab city of Beit Omar, close to the Jewish communities of Gush Etzion and Kiryat Arba, Palestinians flew a Nazi flag next to the local mosque. The flag was seen by numerous Jewish motorists on the nearby highway and photographed several times. They were all astounded to see flying in a neighboring Arab town the symbol under which millions of Jews were massacred during World War II. (A picture of the flag flying can be seen here). Beit Omar, also known as Beit Ummar, is located in territory designated Area B under the Oslo Accords, in which the PA runs the day-to-day civilian affairs.

Uri Arnon, who saw the flag, later said, “I felt we were going back 75 years, losing our hold on the land. The Arabs no longer feel the need to hide their murderous tendencies, announcing out loud that they wish to destroy us” (Sharona Schwartz, ‘Israeli Motorists Shocked When Nazi Flag Seen Flying Near Palestinian Mosque,’ Yahoo News, May 20, 2013).

ZOA National President Morton A. Klein said, “There has been a history of Nazi sympathies among Palestinians, not just now, not just since 1967, but even before there was a Jewish state.

“In fact, the leader of the Palestinians for a generation, Haj Amin el-Husseini, was an admirer of Hitler and a Nazi collaborator. Husseini met with Hitler in 1941, lived out most of the war years as an honored guest of the Nazis in Berlin and also participated in a failed pro-Nazi coup in Iraq in which hundreds of Baghdadi Jews were murdered and maimed in a pogrom called the farhod. Husseini helped raised Muslim troops for the Nazi SS, who participated in the genocide of Jews in the Balkans. After World War II, he was charged with war crimes but evaded trial. Palestinian Arabs never repudiated him or his plans to wipe out the Jews in the Middle East; to the contrary, he is still an honored figure. So the raising of a Nazi flag, though a vicious and repulsive act, is not a surprise coming from a Palestinian city.

“This incident simply reconfirms that the PA and Palestinian society more generally do not accept Israel as a Jewish state, seek to eliminate Israel and engage in incitement to hatred and murder against Israel and also then glorify the terrorism this produces while inculcating this vicious Muslim supremacism and hatred into the next generation of Palestinians.”

We would love to hear from you! Please fill out this form and we will get in touch with you shortly.
Trending Z
Uncategorized May 29, 2013
FLASH: ISRAEL-JORDAN PEACE TREATY (1994) GUARANTEES JEWS ACCESS TO THE TEMPLE MOUNT – LET MY PEOPLE PRAY
Uncategorized May 29, 2013
ZOA Analysis: Most American Rabbis Who Are Boycotting Some Israeli Ministers Are From Extremist Left Wing Groups (J Street; T’ruah; JVP)
Uncategorized May 29, 2013
Israel’s “Right of Return” Grandparent Clause is De-Judaizing the Jewish State – Eliminate It
Uncategorized May 29, 2013
Exclusive: ZOA Accuses Ilhan Omar of Hating the U.S. ‘as Much as Israel,’ Lauds Kevin McCarthy for ‘Throwing Her Off the HFAC’
Center for Law & Justice
We work to educate the American public and Congress about legal issues in order to advance the interests of Israel and the Jewish people.
We assist American victims of terrorism in vindicating their rights under the law, and seek to hold terrorists and sponsors of terrorism accountable for their actions.
We fight anti-Semitism and anti-Israel bias in the media and on college campuses.
We strive to enforce existing law and also to create new law in order to safeguard the rights of the Jewish people in the United States and Israel.
Our Mission
ZOA STATEMENT
The ZOA speaks out for Israel – in reports, newsletters, and other publications. In speeches in synagogues, churches, and community events, in high schools and colleges from coast to coast. In e-mail action alerts. In op-eds and letters to the editor. In radio and television appearances by ZOA leaders. Always on the front lines of pro-Israel activism, ZOA has made its mark.
Related Articles
OP-ED BY: ZOA Poll: Overwhelming 92% Of Israelis Proud Of Their Country