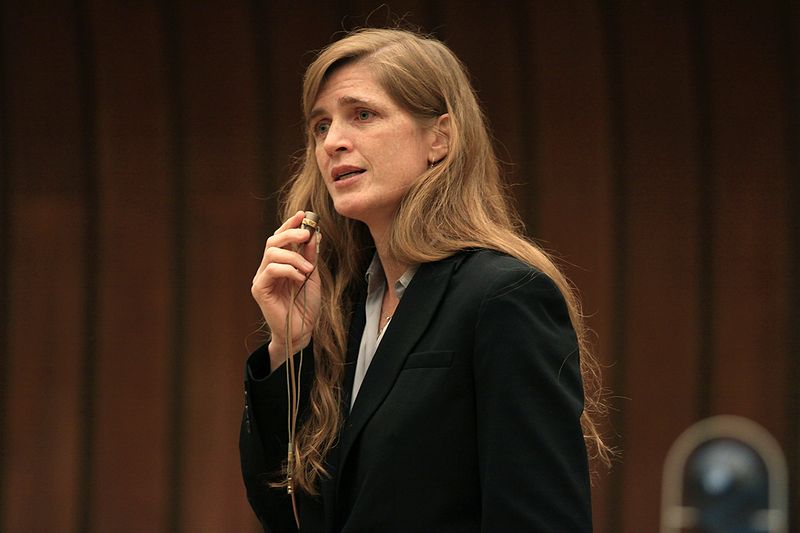 The Zionist Organization of America (ZOA) has expressed opposition to President Barack Obama’s nomination of Samantha Power for the post of U.S. Ambassador to the United Nations, a cabinet-rank position, in succession to Susan Rice. The overwhelming evidence of her entire record causes us great fear and concern as to her appropriateness for this post. The ZOA, in opposing her nomination, cited Powers’ documented record of outspoken anti-Israel statements and lack of diplomatic tact and has urged the Senate to vote her down when her nomination comes before it.

ZOA National President Morton A. Klein said, “The ZOA is deeply concerned about and opposed to the nomination of Samantha Power as U.S. Ambassador to the United Nations. The overwhelming evidence of her entire record causes us great fear and concern as to her appropriateness for this post. Ms. Power’s record clearly shows that she is viscerally hostile to Israel, regards it as a major human rights abuser, even committing war crimes, and would like to see the weight of American military and financial power go to supporting the Palestinian Authority, not Israel. In contrast, she has spoken of Iran as though it scarcely poses a problem. She also strongly suggested that the U.S. cease worrying about alleged Jewish power and money which allegedly forces the U.S. to support Israel and which allegedly is not in the national interest.

“Samantha Power also has a record that strongly suggests that she might well have been a major influence in President Obama’s harmful and humiliating policy of apologizing to the world for American actions that, by and large, have served to protect America and its allies and assured a world order that is not governed by tyrants and terrorists. Her analogy between the need for the U.S. to apologize for its actions like Germany did for the Nazi era is simply an obscene example of moral incoherence. How can such a person represent the United States?

“As her own words show, Ms. Power indulges in astonishing false equivalence between Israel and the Palestinian Authority (PA). She clearly has difficulty in appreciating the distinction between a law-based, free society and democracy like Israel that is defending itself from those who seek its elimination, and a terror-sponsoring, terrorist-glorifying, violence-inculcating PA that has neither signed peace with Israel nor recognized Israel as a Jewish state.

“Ms. Power’s publicly calling Hillary Clinton a ‘monster’ is an episode that suggests a lack of diplomatic tact and circumspection that would bode ill for a U.S. ambassador to the UN.”

“Ms. Power has written she would like the U.S. to be subject to the International Criminal Court, a body that could harm America and other free societies. One can therefore be sure that she would also like to see Israel subjected to the rulings of the ICC, a body which, as the ZOA pointed out in a Jerusalem Post op-ed earlier this year,  has taken a lead in trying to define Israeli Jews living in and moving to Judea and Samaria as guilty of a war crime.

“Can a U.S. Ambassador to the UN who seeks these things be good for America or Israel?

“President Obama’s recent choices of John Brennan as Director of the CIA and Chuck Hagel as Secretary of Defense; his 2009 abortive nomination of the Saudi-decorated, Hamas apologist Israel-hater Chas W. Freeman for the National Intelligence Board; and numerous, lower-level appointments, when coupled now the nomination of Power, reveal a president with little regard for either Israel, the pro-Israel community or the American Jewish community.

“We strongly urge the U.S. Senate to vote down the nomination of Samantha Power.”

We would love to hear from you! Please fill out this form and we will get in touch with you shortly.
Trending Z
Uncategorized June 5, 2013
FLASH: ISRAEL-JORDAN PEACE TREATY (1994) GUARANTEES JEWS ACCESS TO THE TEMPLE MOUNT – LET MY PEOPLE PRAY
Uncategorized June 5, 2013
ZOA Analysis: Most American Rabbis Who Are Boycotting Some Israeli Ministers Are From Extremist Left Wing Groups (J Street; T’ruah; JVP)
Uncategorized June 5, 2013
Israel’s “Right of Return” Grandparent Clause is De-Judaizing the Jewish State – Eliminate It
Uncategorized June 5, 2013
Exclusive: ZOA Accuses Ilhan Omar of Hating the U.S. ‘as Much as Israel,’ Lauds Kevin McCarthy for ‘Throwing Her Off the HFAC’
Center for Law & Justice
We work to educate the American public and Congress about legal issues in order to advance the interests of Israel and the Jewish people.
We assist American victims of terrorism in vindicating their rights under the law, and seek to hold terrorists and sponsors of terrorism accountable for their actions.
We fight anti-Semitism and anti-Israel bias in the media and on college campuses.
We strive to enforce existing law and also to create new law in order to safeguard the rights of the Jewish people in the United States and Israel.
Our Mission
ZOA STATEMENT
The ZOA speaks out for Israel – in reports, newsletters, and other publications. In speeches in synagogues, churches, and community events, in high schools and colleges from coast to coast. In e-mail action alerts. In op-eds and letters to the editor. In radio and television appearances by ZOA leaders. Always on the front lines of pro-Israel activism, ZOA has made its mark.
Related Articles
OP-ED Fmr. Secy. Colin Powell: Defense Dept. Influences Presidential Policy