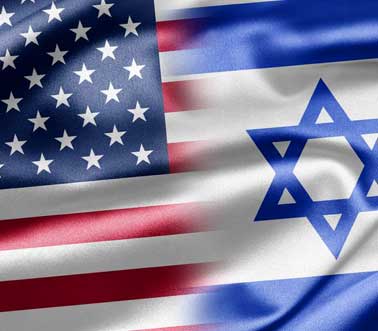 The Zionist Organization of America (ZOA) has criticized and expressed concern at President Barack Obama’s speech delivered before a carefully selected audience of Israeli university students in Jerusalem in which he astonishingly urged students to loudly pressure the democratically-elected Israeli government towards a concessionary policy and on Palestinian statehood; uttered praise rather than criticism of Mahmoud Abbas’ Fatah/Palestinian Authority, which continues incitement to hatred and murder against Israel and refused to negotiate for virtually all of the past four years and has turned down two generous offers of statehood; and repeated calls for a Palestinian state that would be Jew-free.

(President Obama made a number of important, positive statements during his visit, which the ZOA has noted in detail in a separate press release that can be found here).

President Obama could not have delivered such an address to Israel’s democratically elected representatives in the Knesset – a venue in which he declined to speak, contrary to custom – because most of Israel understands that Palestinians are unwilling to make peace with Israel, even if that means forgoing a Palestinian state alongside Israel, and therefore they would reject his argument. Instead, President Obama gave a speech to a carefully selected collection of Israeli university students not broadly representative of Israeli attitudes who would respond well to his criticism of Israel and flat-earth statements about the willingness of Palestinians to make peace. At the same time, precisely those students least likely to agree with him were excluded.

The ZOA has been told by authorities in Israel that students thought likely to disagree or protest President Obamas statements were weeded out. Additionally, only certain universities and colleges received invitations. Prominently not invited were students from Ariel University in Samaria, which was likelier than most student bodies to have students that disagree with President Obama. This astonishing exclusion of Ariel students led left-wing Labor Knesset Member Nachman Shai to call on students to boycott President Obama’s speech.

The ZOA is deeply concerned and critical of the fact that, in his speeches in Israel, President Obama only criticized Israel while never criticizing Mahmoud Abbas’ Palestinian Authority (PA) – nothing about its refusal to arrest terrorists or dismantle terrorist groups; its continuing incitement to hatred and murder of Jews in the PA-controlled media, mosques, schools and youth camps, about which President Obama has previously said he would hold Palestinians to account; or its refusal to place Israel on its maps or to educate its youth for peace and reconciliation, and its refusal to negotiate with Israel. Instead, he arrived with $500 million in aid to the PA and praised it for being a genuine peace partner for Israel. Indeed, President Obama did the opposite of what presidents do in such situations which is to praise his hosts and criticize the other side. He criticized his hosts and shockingly called on students to protest the recently-elected government’s policies while praising the other side.

So offensive has been this speech to Israel’s government and members of the Knesset that a member of the governing coalition, Miri Regev of Prime Minister Benjamin Netanyahu’s Likud-Beiteinu party called Obama’s speech “offensive to Netanyahu … I was surprised by his words about a Palestinian state, that he didn’t mention the word ‘Jerusalem’ and that he said, ‘Leaders must bring peace,’ as if Netanyahu doesn’t want peace.”

We would love to hear from you! Please fill out this form and we will get in touch with you shortly.
Trending Z
News March 22, 2013
ZOA Deplores that Pres. Trump Dined with Jew-Haters Kanye West & Nick Fuentes, and Demands he Condemn Them
Uncategorized March 22, 2013
ZOA Honors Trump With Rarely Given Herzl Award for His Great Pro-Israel Work – Joins Ranks of Balfour, Truman, Begin, Meir, Ben-Gurion
News March 22, 2013
ZOA Responds to Questions About Pres. Trump, Kanye West, Fuentes, etc. Issue
Uncategorized March 22, 2013
Zionist Organization of America Honors Donald Trump for Support for Israel, Jewish Community
Center for Law & Justice
We work to educate the American public and Congress about legal issues in order to advance the interests of Israel and the Jewish people.
We assist American victims of terrorism in vindicating their rights under the law, and seek to hold terrorists and sponsors of terrorism accountable for their actions.
We fight anti-Semitism and anti-Israel bias in the media and on college campuses.
We strive to enforce existing law and also to create new law in order to safeguard the rights of the Jewish people in the United States and Israel.
Our Mission
ZOA STATEMENT
The ZOA speaks out for Israel – in reports, newsletters, and other publications. In speeches in synagogues, churches, and community events, in high schools and colleges from coast to coast. In e-mail action alerts. In op-eds and letters to the editor. In radio and television appearances by ZOA leaders. Always on the front lines of pro-Israel activism, ZOA has made its mark.
Related Articles
OP-ED CIA Nominee Brennan Dismisses Radical Islam, Calls J’lem Al-Quds, Whitewashes Hizballah