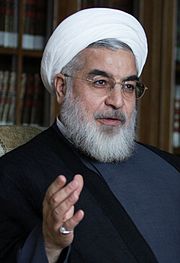 The Zionist Organization of America (ZOA) has cautioned against regarding the election of Hasan Rouhani as the new Iranian President on June 14, 2013 as a sign that Iran has taken a moderate turn and might be willing to either relinquish its war against Israel’s existence or terminate its nuclear weapons program. The ZOA has pointed out Rouhani is a veteran insider intimately involved in years of Iranian deception over its covert nuclear weapons program prior to its discovery in 2002. Additionally, Rouhani was a member of the Iranian government committee that plotted the July1994 bombing of the Jewish community center, the Argentine Israelite Mutual Association (AMIA) in Buenos Aires, Argentina, in which 85 people were killed and hundreds more maimed. the ZOA has also pointed out that the factions within the Iranian regime are not divided on such strategic goals of obtaining nuclear weapons or working for the elimination of Israel, but merely between different approaches to handling these policies internationally.

The ZOA has noted the following salient facts regarding Hasan Rouhani and his career within the top echelon of the Iranian hierarchy:

Mark Wallace, the CEO of United Against Nuclear Iran (UANI) has said, “What we will see from Rowhani, I think, are conciliatory statements in public, while in secret, going forward with the nuclear program.” Soli Shahvar, the Director of the Ezri Center of Iran & Persian Gulf Studies at the University of Haifa, said, “Rowhani’s win is indeed a victory, but whose victory? … I believe that it’s the regime’s victory if we happen to see a softening of the U.S. and western pressure on Iran.”

Karim Sadjadpour, Senior Associate in the Middle East Program at the Carnegie Endowment for International Peace, has written, “Rouhani should not be expected to significantly alter the deeply entrenched strategic principles of the Islamic Republic’s foreign policy, namely opposition to U.S. hegemony, the rejection of Israel’s existence, and support for “resistance” allies such as Hezbollah, Palestinian Islamic Jihad, and the Assad regime in Syria. Indeed there remain deeply entrenched forces in Iran—including, I would argue, Supreme Leader Khamenei—who see resistance against America, and the rejection of Israel’s existence, as inextricable elements of Iran’s revolutionary ideology.”

ZOA National President Morton A. Klein said, “We should not permit ourselves to be fooled when Hasan Rouhani states publicly that the policy of the outgoing president, Mahmoud Ahmadinejad, only brought sanctions on Iran and that he, unlike Ahmadinejad, will ‘reconcile with the world.’

“This is a man who is among those responsible for the July 1994 terrorist bombing of the Jewish community center in Buenos Aires and the killing and wounding of hundreds. If a man is willing to murder, he is also willing to lie. The idea that someone like Rouhani will be a trustworthy interlocutor on the nuclear issue is absurd, especially in view of the fact that he has aided and abetted Iran’s nuclear deceit all along.

“Rouhani has not only played a central role in Iran’s colossal diplomatic deception over the years regarding its nuclear weapons program, but as a Shia jurist sitting on the Assembly of Experts, he has served as guardian of the regime’s undeviating path of repression at home and terrorism and aggression abroad. Is it likely that someone who guards the ideological purity of the regime is a genuine reformer who has the power and will to stop Iran’s nuclear program?

“Rouhani is not a moderate when it comes to ultimate Iranian aims, including the acquisition of nuclear weapons. Like President Mohamed Khatemi in the late 1990s and early 2000s, Rouhani sounds relatively conciliatory and reasonable, while adhering to the same extremist goals. Iran did not cease its nuclear program or alter its policy on destroying Israel during the Khatemi presidency. Let us remember, too, that it was another supposed moderate, Ali Akbar Mohammed Hashemi Rafsanjani, who said in 2001 that the acquisition of a nuclear bomb ‘would not leave anything in Israel.’ Rouhani is part of Rafsanjani’s faction within the Iranian hierarchy.

“In retrospect, we did not see any real, consequential moderation during the Khatemi or Rafsanjani presidencies – on the contrary, the Iranian covert nuclear weapons program, we later discovered, was proceeding apace at this time. Sadly, it is unlikely will see any substantive moderation under Rouhani.

“This is a man who is among those responsible for the July 1994 terrorist bombing of the Jewish community center in Buenos Aires and the killing and wounding of hundreds. If a man is willing to murder, he is also willing to lie.”

“More importantly still, we must remember at all times that the Iranian president is not the most important decision-maker in Tehran – the Supreme Leader, Ayatollah Ali Khamenei, and the Guardianship Council, are.

“Under the Islamist Iranian regime, the president does not have control of the armed forces or the foreign affairs – both are in the hands of Khamenei. Thus, even were Rouhani a true moderate who, among other things, would be prepared to verifiably terminate Iran’s nuclear weapons program, he lacks the power to do so.

“It is therefore imperative that there is not the slightest weakening of sanctions and other forms international pressure on the Iranian regime. The only chance of stopping Iran’s nuclear weapons program by non-military means – a slender chance at best – is to increase, not decrease, pressure on Tehran.”

We would love to hear from you! Please fill out this form and we will get in touch with you shortly.
Trending Z
News July 1, 2013
ZOA Deplores that Pres. Trump Dined with Jew-Haters Kanye West & Nick Fuentes, and Demands he Condemn Them
Uncategorized July 1, 2013
ZOA Honors Trump With Rarely Given Herzl Award for His Great Pro-Israel Work – Joins Ranks of Balfour, Truman, Begin, Meir, Ben-Gurion
News July 1, 2013
ZOA Responds to Questions About Pres. Trump, Kanye West, Fuentes, etc. Issue
Uncategorized July 1, 2013
Zionist Organization of America Honors Donald Trump for Support for Israel, Jewish Community
Center for Law & Justice
We work to educate the American public and Congress about legal issues in order to advance the interests of Israel and the Jewish people.
We assist American victims of terrorism in vindicating their rights under the law, and seek to hold terrorists and sponsors of terrorism accountable for their actions.
We fight anti-Semitism and anti-Israel bias in the media and on college campuses.
We strive to enforce existing law and also to create new law in order to safeguard the rights of the Jewish people in the United States and Israel.
Our Mission
ZOA STATEMENT
The ZOA speaks out for Israel – in reports, newsletters, and other publications. In speeches in synagogues, churches, and community events, in high schools and colleges from coast to coast. In e-mail action alerts. In op-eds and letters to the editor. In radio and television appearances by ZOA leaders. Always on the front lines of pro-Israel activism, ZOA has made its mark.
Related Articles
OP-ED BY: ZOA ZOA Praises Obama Admin. For Walk-Out of U.S. Ambassador From Talks After Iran Accused Israel of “Genocide”