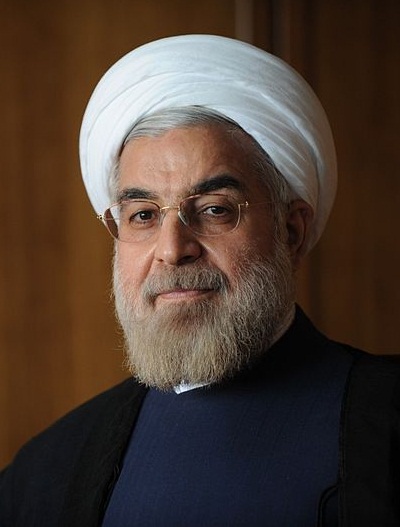 The Zionist Organization of America (ZOA) has drawn attention to new Iranian President Hasan Rouhani’s boasting in an Iranian television interview of having played an instrumental role in Iranian deception on its nuclear weapons program over the years. This is but the latest addition to Rouhani’s long record of extremism, deception on nuclear weapons and involvement in mass casualty acts of Iranian terrorism against Jews, which the ZOA outlined in July when he was elected president. It also demonstrates that his image as a moderate is fraudulent.

Speaking on Iran’s state IRIB TV (Islamic Republic of Iran Broadcasting) on May 27, in response to the interviewer’s challenge that, as Iran’s chief nuclear negotiator in 2003-5, “everything was suspended” on Iran’s nuclear program, Rouhani said this was “a lie” and proceeded to explain that Iran, in fact, had actually breached its international commitments. Rouhani said that Iran had systematically violated its commitments under the Iran-European Union October 2003 Tehran Declaration, which committed Iran to verifiably suspending its nuclear program. He said proudly, “We did not let that happen!”

“As we already argued when Rouhani was elected in July, we cannot expect moderation or honesty from him on the nuclear front…”

Far from honoring the commitment, in which Iran said “it has decided voluntarily to suspend all uranium enrichment and reprocessing activities,” Rouhani told the interviewer that all Iran did was merely suspend “ten centrifuges” in its Natanz enrichment facility and that it was “not a total suspension. Just reduced the yield.” When challenged that enrichment had been suspended at its Isfahan plant, Rouhani repudiated this claim, too, saying that work had continued in Isfahan on his watch during 2004-5 as had also the development of the Iranian heavy water reactor at Arak. “Do you know when we developed yellowcake? Winter 2004 … Do you know when the number of centrifuges reached 3,000? Winter 2004 … We halted the nuclear program? We were the ones to complete it! We completed the technology” (‘Rouhani, on Iranian TV in May, detailed how he broke nuclear pledge,’ Times of Israel, October 6, 2013).

ZOA National President Morton A. Klein said, “As we already argued when Rouhani was elected in July, we cannot expect moderation or honesty from him on the nuclear front.

“Even if Rouhani really was a moderate who somehow managed to be approved to run in the presidential elections by the Supreme Leader Ayatollah Ali Khameni and the Guardian Council that actually hold the keys of power in Tehran, Iranian policy would still be in their hands, not Rouhani’s.

“But in any case, as he now plainly boasted with satisfaction, Rouhani was Iran’s chief nuclear negotiator at the time Iran was concealing from the world its clandestine nuclear weapons program and taking the essential steps –– not to develop a peaceful, civilian, nuclear energy program ––but a nuclear weapons program.

“As we have argued before, it is therefore imperative that there is not the slightest weakening of sanctions and other forms of international pressure on the Iranian regime. The only chance of stopping Iran’s nuclear weapons program by non-military means –– a slender chance at best –– is to increase, not decrease, pressure on Tehran.”

We would love to hear from you! Please fill out this form and we will get in touch with you shortly.
Trending Z
Uncategorized October 15, 2013
FLASH: ISRAEL-JORDAN PEACE TREATY (1994) GUARANTEES JEWS ACCESS TO THE TEMPLE MOUNT – LET MY PEOPLE PRAY
Uncategorized October 15, 2013
ZOA Analysis: Most American Rabbis Who Are Boycotting Some Israeli Ministers Are From Extremist Left Wing Groups (J Street; T’ruah; JVP)
Uncategorized October 15, 2013
Israel’s “Right of Return” Grandparent Clause is De-Judaizing the Jewish State – Eliminate It
Uncategorized October 15, 2013
Exclusive: ZOA Accuses Ilhan Omar of Hating the U.S. ‘as Much as Israel,’ Lauds Kevin McCarthy for ‘Throwing Her Off the HFAC’
Center for Law & Justice
We work to educate the American public and Congress about legal issues in order to advance the interests of Israel and the Jewish people.
We assist American victims of terrorism in vindicating their rights under the law, and seek to hold terrorists and sponsors of terrorism accountable for their actions.
We fight anti-Semitism and anti-Israel bias in the media and on college campuses.
We strive to enforce existing law and also to create new law in order to safeguard the rights of the Jewish people in the United States and Israel.
Our Mission
ZOA STATEMENT
The ZOA speaks out for Israel – in reports, newsletters, and other publications. In speeches in synagogues, churches, and community events, in high schools and colleges from coast to coast. In e-mail action alerts. In op-eds and letters to the editor. In radio and television appearances by ZOA leaders. Always on the front lines of pro-Israel activism, ZOA has made its mark.
Related Articles
OP-ED BY: Morton A. Klein Hagel Blames Israel for Palestinian Terrorism