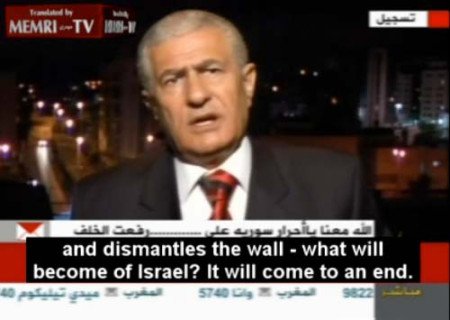 The Zionist Organization of America (ZOA) has pointed to the obscene glorification of Jew-killing terrorists by the senior Palestinian leadership, including the Fatah-controlled Palestinian Authority (PA) president Mahmoud Abbas, who described Jew-killing terrorists, as he has done before, as “heroic brothers”; and the PA’s Abbas Zaki, who mocked those Israelis bereaved by the batch of recently freed Palestinian terrorists saying, “Die in your rage. Go to your cemeteries and recite over your dead whatever you recite.”

Following last week’s freeing by Israel of 26 blood-soaked Palestinian terrorists, senior PA officials, including PA president Abbas, attended a welcoming ceremony for 21 of the terrorists  (all having been convicted of murder) where Abbas greeted the murderers on stage, kissed each one, and then addressed the audience saying, “We welcome our heroic brothers who come from behind bars to the world of freedom. We congratulate ourselves and we congratulate all of you in this great celebration that unifies and returns our sons to us.” Among the released terrorists was murderer Issa Abd Rabbo, who was serving two life sentences for kidnapping, tying up and murdering two Israeli university students, Ron Levi and Revital Seri in October 1984. On stage, Abbas held up murderer Abd Rabbo’s hand in front of the cheering crowd while Abd Rabbo made the sign of victory. Other PA officials praised the murderers; PA Minister of Prisoners’ Affairs, Issa Karake, said, “Each one of you prisoners is a sun lighting up Palestine’s sky” (Official PA TV, Oct. 30, 2013, translation in ‘Abbas: Terrorist murderers are “heroic brothers,”’ Palestinian Media Watch (PMW) bulletin, October 31, 2013).

“It should be patently obvious that people who shamelessly mock the bereaved victims of terrorism are monsters, not peace-makers…”

At a Fatah event celebrating Israel’s release of three murderers from among the 26 terrorist prisoners released last week, Abbas Zaki, speaking for Fatah, mocked the Israelis bereaved by the acts of under carried out by the freed terrorists, saying, “No one expected that Israel, which hands down life sentences and decided that they [the prisoners] would go from prison to the grave, [would release them] … We say to Israel: Die in your rage. Go to your cemeteries and recite over your dead whatever you recite. Here they are [who Israel said] ‘have blood on their hands’ (i.e., murderers); here they are [back] among their own people: fighters, knights, free men!” (‘Fatah leader to Israel: “Die in your rage”: Fatah leader Abbas Zaki mocks Israel for releasing murderers who were serving life sentences,’ PMW bulletin, November 5, 2013).

ZOA National President Morton A. Klein said, “The shameless, ghoulish and obscene words of Mahmoud Abbas, the so-called ‘moderate’ and ‘peace-maker,’ and Abbas Zaki are obscene and shocking even by the low standard set by the PA.

“It should be patently obvious that people who shamelessly mock the bereaved victims of terrorism are monsters, not peace-makers.

“In his speech to AIPAC on May 22, 2011, President Obama said that ‘we will hold the Palestinians accountable for their actions and for their rhetoric. (Applause).’ Now is the time to do so.

“We call upon President Obama to personally and publicly condemn the obscene words of PA officials, including Abbas and Zaki, at the ceremonies to welcome these murderers into the PA and to demand as a condition of continuing negotiations that the PA officials themselves publicly retract their statements.

‘Now is the time for President Obama to insist on the immediate termination of incitement to hatred and murder and glorification of terrorists in the PA.”

We would love to hear from you! Please fill out this form and we will get in touch with you shortly.
Trending Z
News November 11, 2013
ZOA Condemns U.S. State Dept. & U.S. Amb. Nides For Siding with Antisemitic, Discriminatory Palestinian & Hamas Terrorists re: the Temple Mount, Violating Jews’ Religious Freedom
News November 11, 2013
ZOA’s Klein JPost Op-Ed: There is Nothing Extreme About Israel’s New Government
Uncategorized November 11, 2013
FLASH: ISRAEL-JORDAN PEACE TREATY (1994) GUARANTEES JEWS ACCESS TO THE TEMPLE MOUNT – LET MY PEOPLE PRAY
Uncategorized November 11, 2013
ZOA Analysis: Most American Rabbis Who Are Boycotting Some Israeli Ministers Are From Extremist Left Wing Groups (J Street; T’ruah; JVP)
Center for Law & Justice
We work to educate the American public and Congress about legal issues in order to advance the interests of Israel and the Jewish people.
We assist American victims of terrorism in vindicating their rights under the law, and seek to hold terrorists and sponsors of terrorism accountable for their actions.
We fight anti-Semitism and anti-Israel bias in the media and on college campuses.
We strive to enforce existing law and also to create new law in order to safeguard the rights of the Jewish people in the United States and Israel.
Our Mission
ZOA STATEMENT
The ZOA speaks out for Israel – in reports, newsletters, and other publications. In speeches in synagogues, churches, and community events, in high schools and colleges from coast to coast. In e-mail action alerts. In op-eds and letters to the editor. In radio and television appearances by ZOA leaders. Always on the front lines of pro-Israel activism, ZOA has made its mark.
Related Articles
OP-ED Abbas’ Fatah/P.A. New Logo Features All Of Israel Only As ‘Palestine’