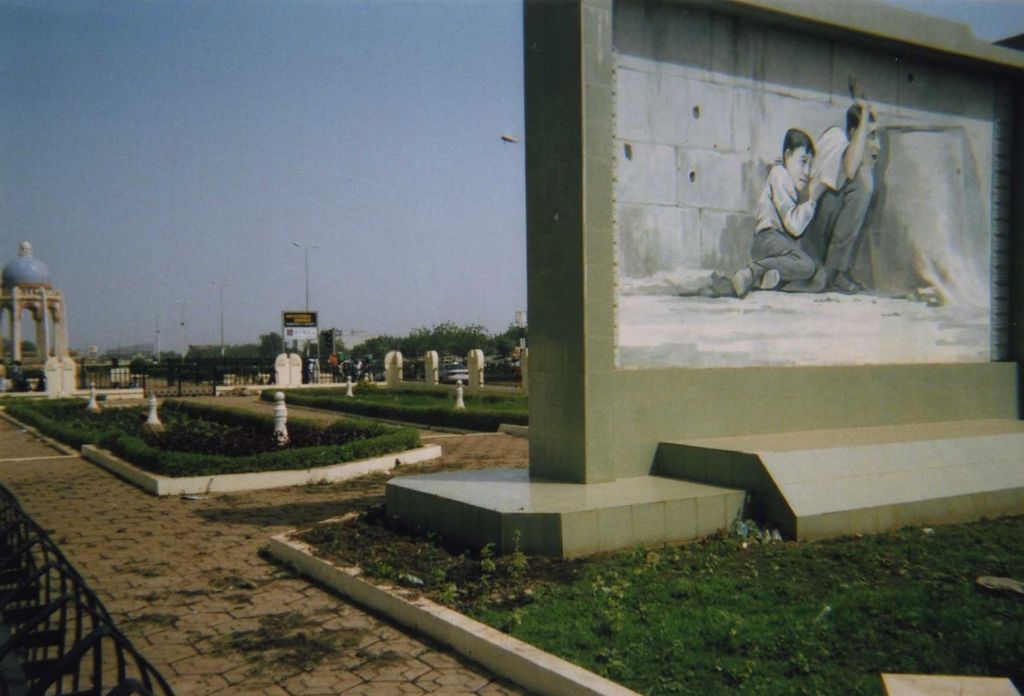 The Zionist Organization of America (ZOA) has denounced the terrible blood libel following the publication of an authoritative Israeli investigative report which concluded that the Palestinian 12-year-old boy, Muhammad al-Dura, portrayed by France-2 Television as having been killed by Israeli fire during a firefight with Palestinian forces at the Netzarim Junction on September 30, 2000, was actually neither killed nor injured during the incident in question. The ZOA has also supported calls made by Shurat HaDin – Israel Law Center for the filing of criminal charges against the France-2 journalist concerned, Charles Enderlin, and the revocation of his right to practice journalism. This was a fake, staged ugly Palestinian lie, nothing less than a blood libel against the Jewish state.

The Israeli investigative inquiry, appointed by Defense Minister Moshe Yaalon, and headed by Brigadier- General (res.) Yossi Kuperwasser, the former head of the Research and Analysis Division of the Israeli Defense Forces (IDF) Military Intelligence Directorate, and the current director-general of the Strategic Affairs Ministry, made that finding after years of examining the evidence.

Al-Dura was allegedly killed by IDF fire at the Netzarim Junction during a September 2000 firefight. In news reports, repeatedly innumerable times around the world, footage, shot by a Palestinian cameraman working for France-2, Talal Abu Rahma, was shown of the young, terrified boy crouching behind his father, Jamal, during a gun battle. But there was no footage broadcast of the boy actually being killed or wounded, only the aftermath, in which Al-Dura was shown lying still, apparently dead. Shockingly, if one examines the footage, there was no blood and the boy’s arm and leg were filmed moving after he had been allegedly killed. The report, by France 2’s Charles Enderlin, who did not witnesses the incident, relayed the story given to him by Abu Rahma that al-Dura had been killed. This story passed at the time as absolute fact.

Israel did not deny that its forces had hit Dura, assuming him to have fallen victim during the crossfire. But the subsequent Israeli Orr Commission concluded that al-Dura had not been hit by Israel fire. Now, Following a further investigation, General Kuperwasser has confirmed the committee’s conclusion that al-Dura had not been hurt at all and that the video clip had indeed been staged. “The committee was comprised of numerous specialists from the Technion-Israel Institute of Technology, as well as other academic institutions. The committee also collected information from physicist Nahum Shahaf, who used angles and rate of fire to prove that the scene had been staged” (Ben Caspit, ‘Muhammad Al-Dura: The boy who wasn’t really killed,’ Jerusalem Post, May 14, 2013).

The new Israeli inquiry, according to the Israeli daily Haaretz, shows that “‘there are many indications’ that Mohammed al-Dura and his father, Jamal, ‘were never hit by gunfire’ – neither Israeli nor Palestinian – after all. The national panel of inquiry further claims that contrary to the famed report carried by the France 2 television network on the day of the incident, September 30, 2000, 12-year-old Mohammed al-Dura appears to be alive at the end of the complete footage captured of the event … The committee found that the evidence in the television station’s possession did not support the claim that al-Dura died as a result of IDF gunfire. It added that the report falsely created the impression that the channel had solid proof that Israeli soldiers were responsible for the boy’s death. ‘Contrary to the claim that the boy was dead, the committee’s review of the raw footage indicates that at the end of the video – the part that was not broadcast – the boy appears to be alive,’ the inquiry stated. ‘The probe has found that there is no evidence to support the claims that the father, Jamal, or the boy Mohammed, were shot. Furthermore, the video does not show Jamal being seriously wounded.’” (Barak Ravid, ‘Israeli panel: Palestinian boy ‘killed’ by IDF at start of intifada did not actually die,’ Haaretz, May 20, 2013).

ZOA National President Morton A. Klein said, “It has taken over a decade to have detailed, official Israeli confirmation that Muhammad al-Dura was neither killed nor even injured by Israeli fire in September 2000. Yet the al-Dura legend did Israel extraordinary harm. It is one of the great blood libels of Jewish history.

“As a result of Enderlin’s fabricated report, Israel was subjected to waves of international criticism and innumerable acts of anti-Semitic violence occurred around the globe. It was cited by the murderers of the Wall Street Journal’s Daniel Pearl in Pakistan. Postage stamps bearing al-Dura’s crouched image have been issued in Jordan, Egypt and Tunisia; a street in Baghdad and a square in Morocco bear his name, while many schools across the Arab world are named after him. His image has even been reproduced on a designer dress in Saudi Arabia.

“Palestinian Authority television has repeatedly aired a film showing al-Dura in heaven, beckoning other Palestinian children to ‘martyr’ themselves by becoming terrorists so that they can join him in paradise. And the earlier Orr Commission concluded that ‘Muhammad al-Dura’s picture, which was distributed by the media, was one of the causes that led people in the Arab sector to take to the streets on October 1, 2000.’

“This chain of events bears out the memorable saying of Winston Churchill who once said that, ‘A lie gets halfway around the world before the truth has a chance to get its pants on.’

“Now that the truth is known, however, Israel should hold a major press conference, complete with detailed graphics and forensic evidence on display, to state the truth loudly and clearly and to dispel the propaganda lies that have been spun about the alleged death of Muhammad al-Dura. We urge Prime Minister Netanyahu or another top Israeli official to lead the press conference exposing this ugly lie. Charles Enderlin, France 2 TV, and the battery of hostile, heedless and biased media that repeated the lie over and over and ignored the truth as it emerged should be held to account. A press conference to present the findings of General Kuperwasser’s report would be an essential first step in that direction.”

“This is scarcely the first lie from the mill of Palestinian propaganda. Corpses and wounded people who suddenly leap off stretchers when they think the cameras have stopped rolling, ambulances ferrying terrorists instead of wounded people, Palestinians accidentally detonating home-made bombs with the resultant dead and injured shown to the world as victims of an Israeli airstrike, doctored photographs of infants without limbs, and so on – blood libels against Israel are Palestinian stock-in-trade which needs to be convincingly exposed.

“As Jonathan Tobin has written on Commentary magazine’s ‘Contentions’ blog, exposing the lie about the Al-Dura fraud is ‘important because so long as the Arab and Muslim world clings to its blood libels all talk about peace is futile. The “Pallywood” productions, of which the al-Dura hoax is the most prominent, haven’t just deceived the West. They’ve also reinforced the Palestinian myths about themselves … Unless and until the Palestinians give up their campaign of incitement against Israelis and Jews and stop seeking to depict this conflict as one in which they are only the victims of a violent Zionist plot, there is no hope for any solution.’”

We would love to hear from you! Please fill out this form and we will get in touch with you shortly.
Trending Z
News May 21, 2013
ZOA Condemns U.S. State Dept. & U.S. Amb. Nides For Siding with Antisemitic, Discriminatory Palestinian & Hamas Terrorists re: the Temple Mount, Violating Jews’ Religious Freedom
Uncategorized May 21, 2013
FLASH: ISRAEL-JORDAN PEACE TREATY (1994) GUARANTEES JEWS ACCESS TO THE TEMPLE MOUNT – LET MY PEOPLE PRAY
Uncategorized May 21, 2013
ZOA Analysis: Most American Rabbis Who Are Boycotting Some Israeli Ministers Are From Extremist Left Wing Groups (J Street; T’ruah; JVP)
Uncategorized May 21, 2013
Israel’s “Right of Return” Grandparent Clause is De-Judaizing the Jewish State – Eliminate It
Center for Law & Justice
We work to educate the American public and Congress about legal issues in order to advance the interests of Israel and the Jewish people.
We assist American victims of terrorism in vindicating their rights under the law, and seek to hold terrorists and sponsors of terrorism accountable for their actions.
We fight anti-Semitism and anti-Israel bias in the media and on college campuses.
We strive to enforce existing law and also to create new law in order to safeguard the rights of the Jewish people in the United States and Israel.
Our Mission
ZOA STATEMENT
The ZOA speaks out for Israel – in reports, newsletters, and other publications. In speeches in synagogues, churches, and community events, in high schools and colleges from coast to coast. In e-mail action alerts. In op-eds and letters to the editor. In radio and television appearances by ZOA leaders. Always on the front lines of pro-Israel activism, ZOA has made its mark.
Related Articles
OP-ED Abbas’ Fatah/P.A. New Logo Features All Of Israel Only As ‘Palestine’