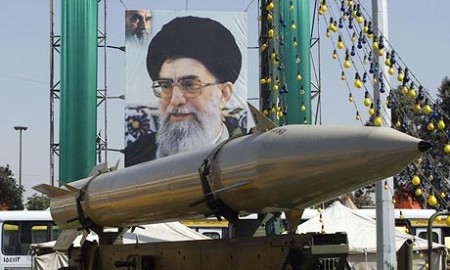 The Zionist Organization of America (ZOA) has strongly criticized the extreme leftwing, George Soros-funded, faux pro-Israel group, J Street, for supporting the easing of sanctions on Iran and shamelessly attacking virtually every other American Jewish organization for “undermining” the efforts of the Obama Administration to arrive at a nuclear deal with Iran.

J Street has claimed that “the outcome of the talks set to resume in Geneva on November 20 is far from certain, but new sanctions will definitively bring the process to a halt” and urged people to tell U.S. senators that “now is not the time for new sanctions.” It has also claimed falsely that “some American Jewish organizations are pushing new sanctions that will undoubtedly undermine negotiations” (‘TELL YOUR SENATORS: DON’T UNDERMINE IRAN NEGOTIATIONS WITH NEW SANCTIONS,’ J Street Petition).

ZOA National President Morton A. Klein said, “J Street is supporting an approach that is harmful to the vital security interests of both the United States and Israel.

“Last week, the Obama Administration sought to finalize a deal with Iran that, if agreed upon by all parties to the talks, would enable Tehran to retain all the essential elements of its nuclear weapons program:

“A deal that gives Iran relief from sanctions while allowing it to keep essential elements, not for a nuclear energy program, but for a nuclear weapons program, is a terrible deal.

“J Street is also wrong in its assertion that further sanctions would harm the prospects of a diplomatic solution.

“Maintaining sanctions is one of the few things that could induce the Iranian regime to stop its nuclear program. Weakening them not only sends the wrong signal, one of weakness and lack of will, which will encourage Iranian intransigence –– after all, why concede when your opponent is already weakening? –– but will also enable Iran to more swiftly attain its nuclear weapons objective relatively unscathed.

“Why would J Street want that? Israelis certainly do not want that. An Israel Hayom poll last Friday showed that Israeli Jews opposed the deal being proposed in Geneva by a clear 66% to 16%.

“It is nothing new for J Street to adopt polices opposed by the majority of Israelis and American Jews. To name a few:

We would love to hear from you! Please fill out this form and we will get in touch with you shortly.
Trending Z
Uncategorized November 21, 2013
FLASH: ISRAEL-JORDAN PEACE TREATY (1994) GUARANTEES JEWS ACCESS TO THE TEMPLE MOUNT – LET MY PEOPLE PRAY
Uncategorized November 21, 2013
ZOA Analysis: Most American Rabbis Who Are Boycotting Some Israeli Ministers Are From Extremist Left Wing Groups (J Street; T’ruah; JVP)
Uncategorized November 21, 2013
Israel’s “Right of Return” Grandparent Clause is De-Judaizing the Jewish State – Eliminate It
Uncategorized November 21, 2013
Exclusive: ZOA Accuses Ilhan Omar of Hating the U.S. ‘as Much as Israel,’ Lauds Kevin McCarthy for ‘Throwing Her Off the HFAC’
Center for Law & Justice
We work to educate the American public and Congress about legal issues in order to advance the interests of Israel and the Jewish people.
We assist American victims of terrorism in vindicating their rights under the law, and seek to hold terrorists and sponsors of terrorism accountable for their actions.
We fight anti-Semitism and anti-Israel bias in the media and on college campuses.
We strive to enforce existing law and also to create new law in order to safeguard the rights of the Jewish people in the United States and Israel.
Our Mission
ZOA STATEMENT
The ZOA speaks out for Israel – in reports, newsletters, and other publications. In speeches in synagogues, churches, and community events, in high schools and colleges from coast to coast. In e-mail action alerts. In op-eds and letters to the editor. In radio and television appearances by ZOA leaders. Always on the front lines of pro-Israel activism, ZOA has made its mark.
Related Articles
OP-ED ZOA Praises ADL, AJC Call For Further Review of Hagel’s Record – AIPAC & Others Silent