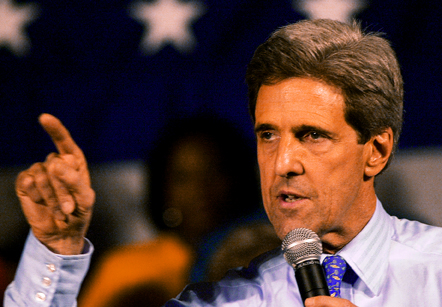 The Zionist Organization of America (ZOA) is strongly critical and concerned by a recent statement by Secretary of State John Kerry, implying that it is understandable and even appropriate that countries may boycott Israel and that Israel will be diplomatically abandoned by the U.S. if it fails to acquiesce in Kerry’s deeply flawed and unrealistic formula of dangerous and unjust concessions for creating a Palestinian state, which would surely be an anti-Israel terrorist state, while forcibly expelling over 100,000 Jews from homes in Judea/Samaria and the eastern half of Jerusalem. Secretary Kerry is thus urging Israel to set up a Palestinian state, which a ZOA-commissioned McLaughlin poll of 1,000 Americans showed last week that Americans believe by 58% to 17% will be a terrorist state.

The ZOA has stated that Secretary Kerry, when speaking of the prospect of international boycotts and isolation for Israel if talks fail, conspicuously failed to oppose or condemn such an international response as wrong and immoral, thereby sending the damaging and terrible message that the U.S. will do nothing to stop Israel’s potential isolation.

Speaking over the weekend at the Munich Security Conference, Secretary Kerry said “I believe that – and you see for Israel there’s an increasing de-legitimization campaign that has been building up. People are very sensitive to it. There are talk of boycotts and other kinds of things. Are we all going to be better with all of that?” (‘Remarks at Munich Security Conference,’ February 1, 2014).

ZOA National President Morton A. Klein said, “Secretary Kerry’s speech in Munich over the weekend speech is disturbing and even frightening.

“He basically implied that, if talks fail, boycotting and isolating Israel is both inevitable and understandable.

“This means only one thing –– Secretary Kerry is saying that Israel will be held responsible and that boycotts are to be expected.

“He did not say that the U.S. would oppose and condemn such boycotts and use its diplomatic and economic power to oppose these developments. To the contrary, he implied that the Obama Administration would do nothing.

“He basically implied that, if talks fail, boycotting and isolating Israel is both inevitable and understandable…”

“By speaking of the looming threat of foreign boycotts and Palestinian terrorism if Israel doesn’t do as Secretary Kerry suggests –– but without condemning such actions and indicating that these are wholly unacceptable to the U.S. –– Secretary Kerry disgracefully and irresponsibly green-lighted such responses.

“The Obama Administration, as the ZOA has pointed out on numerous occasions, has never held the PA accountable for vicious and obscene incitement to hatred and murder against Israel; never penalized the PA for continual promotion of terror; never penalized the PA for demanding U.S. aid as a right or subverting negotiations by resort to the UN; never insisted on PA fulfillment of it Oslo commitments to disband terrorist groups, arrest terrorists, confiscate illegal weaponry and end incitement in the PA-controlled media, mosques, schools and youth camps.

“In this speech, Secretary Kerry did worse than not hold the PA accountable. He whitewashed it and lavished praise on Abbas as someone ‘committed to a peaceful process’ –– this about the man who reiterated just this week that he will never accept Israel as Jewish state; who told Arab journalists that ‘If [the Arab states] want war, and if all of you will fight Israel, we are in favor,’ who said that a future Palestinian state ‘will be free of all Jews,’ who called Palestinian terrorists ‘heroes fighting for freedom,’ who said that disarming Palestinian terrorist groups  –– a signed Palestinian requirement under Oslo –– is a ‘red line’ that must not be crossed,’ and who embraced the bestial, child-murdering Jew-killer Samir Kuntar.

“With this Kerry speech, little wonder that, as the same ZOA poll also showed, only 31% of Americans regard President Obama as a close and reliable friend of Israel.”

We would love to hear from you! Please fill out this form and we will get in touch with you shortly.
Trending Z
Uncategorized February 4, 2014
ZOA Analysis: Most American Rabbis Who Are Boycotting Some Israeli Ministers Are From Extremist Left Wing Groups (J Street; T’ruah; JVP)
Uncategorized February 4, 2014
ZOA: Israel’s Reasonable Judicial Reform Proposals Are Good for Democracy, the Rule of Law and the Economy
News February 4, 2014
ZOA is Disappointed, Offended and Frightened by 211 U.S. House Votes Supporting Jew-Hating, Israel-Hating Rep. Ilhan Omar
Uncategorized February 4, 2014
Israel’s “Right of Return” Grandparent Clause is De-Judaizing the Jewish State – Eliminate It
Center for Law & Justice
We work to educate the American public and Congress about legal issues in order to advance the interests of Israel and the Jewish people.
We assist American victims of terrorism in vindicating their rights under the law, and seek to hold terrorists and sponsors of terrorism accountable for their actions.
We fight anti-Semitism and anti-Israel bias in the media and on college campuses.
We strive to enforce existing law and also to create new law in order to safeguard the rights of the Jewish people in the United States and Israel.
Our Mission
ZOA STATEMENT
The ZOA speaks out for Israel – in reports, newsletters, and other publications. In speeches in synagogues, churches, and community events, in high schools and colleges from coast to coast. In e-mail action alerts. In op-eds and letters to the editor. In radio and television appearances by ZOA leaders. Always on the front lines of pro-Israel activism, ZOA has made its mark.
Related Articles
OP-ED ZOA Praises ADL, AJC Call For Further Review of Hagel’s Record – AIPAC & Others Silent