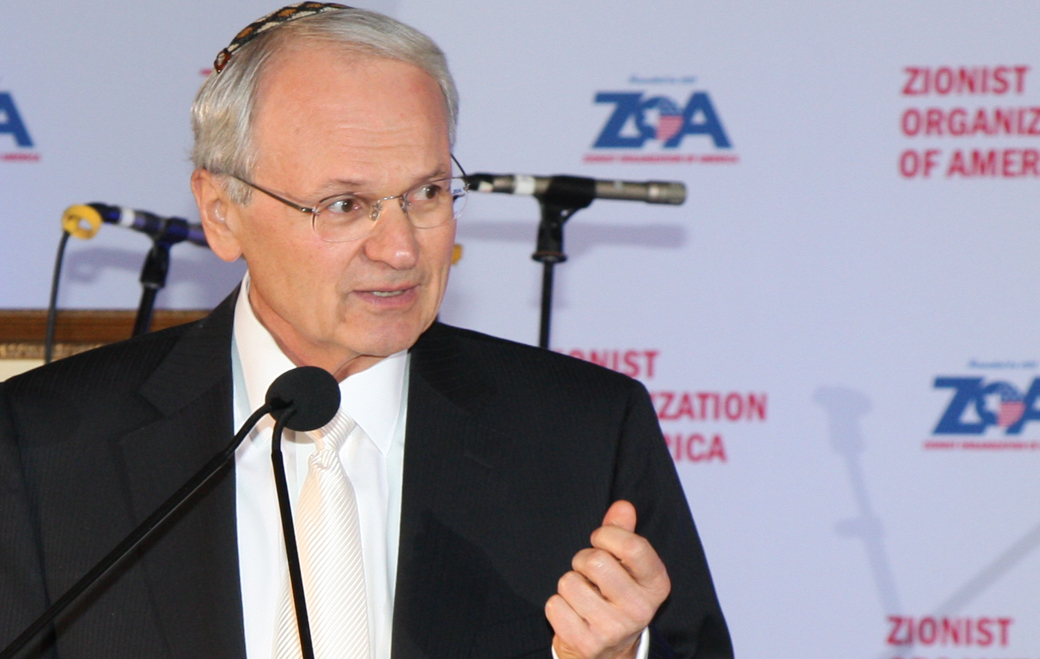 The Zionist Organization of America (ZOA), at its 97th National Convention, held at the Hilton Hotel in Philadelphia, has re-elected National President Morton A. Klein, who garnered a landslide 93% of the vote of ZOA delegates from around the country. This reflected a clear mandate for Mort Klein’s leadership of the ZOA on behalf of Israel and the Jewish people and an overwhelming repudiation of his opponent’s false and outrageous allegations. In his own speech to the Convention, Mr. Klein answered virtually all of his opponent’s ludicrous allegations head-on.

Delegates flew into Philadelphia from Los Angeles, San Diego, San Francisco, New York, Detroit, Cleveland, Washington D.C., as well as from Florida, Georgia, New Jersey, Virginia, Maryland and other states to participate in the vote and the Convention deliberations.

Delegates at the Convention Dinner were treated to a passionate and inspiring keynote address from former contender for the Republican presidential nomination, U.S. Congresswoman Michele Bachmann (R-MN), who congratulated Mort Klein on his re-election victory and spoke of the ominous increase in the dangers facing Israel, exacerbated by the hostile policies of the Obama Administration, including the veiled threats that have issued in recent weeks from both President Barack Obama and Secretary of State John Kerry if Israel does not conform to American dictates for Israeli/Palestinian negotiations.

“… a clear mandate for Mort Klein’s leadership of the ZOA on behalf of Israel and the Jewish people.”

Mort Klein made a passionate speech about the anti-Israel myths surrounding the Arab/Israeli situation, including such issues as Jerusalem, the so-called ‘occupation,’ ‘settlements,’ Palestinian Authority (PA) statehood, the anti-Israel apartheid slur, and the falsity of PA president Mahmoud Abbas’ image as a moderate and peace-maker.

Convention delegates heard addresses from senior ZOA staff. Susan Tuchman Esq., the Director of ZOA’s Center for Law and Justice, was one of the luncheon keynote speakers. Ms. Tuchman discussed ZOA’s important and critical work protecting students from anti-Semitism and anti-Israel harassment at colleges and high schools. She described ZOA’s major accomplishment in getting the U.S. government to clarify that Title VI of the Civil Rights Acts would be enforced to protect Jewish students from anti-Semitic harassment and intimidation at publicly-funded schools. Ms. Tuchman (who has been recognized for her path-breaking work in this area by the Jewish newspaper, The Forward, one of the most influential Jewish leaders in America. ZOA is the only American Jewish organization to have had two different people from the ZOA recognized in this manner), described how the ZOA has effectively used this policy at schools around the country to ensure that Jewish students have a learning environment that is physically and emotionally safe.

The Director of the ZOA’s Israel Office, Jeff Daube, gave a detailed account of the ZOA efforts in Israel to promote the 2013 Levy Report, the distinguished legal commission appointed by the government, under the chairmanship of former Israeli Supreme Court Justice Edmond Levy, which made clear the legality of Jewish residence in Judea and Samaria. Mr. Daube also spoke of the ZOA’s efforts to secure the historic Mount of Olives Jewish cemetery from desecration and vandalism by Palestinian Arabs.

ZOA Government Relations Co-Director Dan Pollak elaborated on the major dangers posed by the Geneva Interim Deal on Iran’s nuclear weapons program, signed last November. He noted that Iranian exports had spiked 73% in January, following the relaxation of sanctions on Iran contained in the Geneva deal. ZOA Government Relations Co-Director Josh London spoke of the U.S. House committee investigation, convened at the ZOA’s urging, into U.S. funding of the PA, which had used U.S. aid to pay special salaries to convicted Palestinian terrorists jailed by Israel to reward them for murdering Jews. Mr. London noted that, the more Jews they murdered, the larger their salaries.

ZOA Campus Affairs Director Sharona Whisler gave a comprehensive outline of ZOA’s expanding initiatives on various college campuses to protect Jewish students from anti-Semitic intimidation masquerading as pro-Palestinian activism. She also spoke of the highly successful ZOA campus leadership mission to Israel, in which a record number of students had participated and ZOA campus programs which train students how to answer propaganda lies from Israel-haters on campus. Ms. Whisler proudly noted that the ZOA was the only major Jewish group to send college students to visit Jewish communities in Judea and Samaria.

The Director of the ZOA’s Center for Middle East Policy, Dr. Daniel Mandel, delivered an address exposing some of the gaping deficiencies of the Geneva Interim Agreement on Iran’s nuclear weapons program.

ZOA Philadelphia Co-Presidents Jerry Verlin and Lee Bender delivered a detailed address outlining the vocabulary of biased media reportage which compromises Israel’s case and misleads the public, drawing on their book on the subject, Pressing Israel.

Steve Feldman, Executive Director of the ZOA’s Mid-Atlantic Region, spoke about the activities and responsibilities of ZOA regions.

The Convention lunch featured a rousing keynote address by Chloe Simone Valdary, an African-American junior and international studies major at the University of New Orleans. Ms. Valdary, an innovative and tireless activist in support of Israel, spoke passionately of Israel’s righteous and just cause and recounted the profound effect participating on a ZOA college students trip to Israel had had on her activism and understanding of the truth of the Arab war on Israel. Ms. Valary noted that, on this trip, she became aware that the so-called ‘Jewish settlements’ were in fact beautiful Jewish towns and cities.

We would love to hear from you! Please fill out this form and we will get in touch with you shortly.
Trending Z
Uncategorized March 10, 2014
FLASH: ISRAEL-JORDAN PEACE TREATY (1994) GUARANTEES JEWS ACCESS TO THE TEMPLE MOUNT – LET MY PEOPLE PRAY
Uncategorized March 10, 2014
ZOA Analysis: Most American Rabbis Who Are Boycotting Some Israeli Ministers Are From Extremist Left Wing Groups (J Street; T’ruah; JVP)
Uncategorized March 10, 2014
Israel’s “Right of Return” Grandparent Clause is De-Judaizing the Jewish State – Eliminate It
Uncategorized March 10, 2014
Exclusive: ZOA Accuses Ilhan Omar of Hating the U.S. ‘as Much as Israel,’ Lauds Kevin McCarthy for ‘Throwing Her Off the HFAC’
Center for Law & Justice
We work to educate the American public and Congress about legal issues in order to advance the interests of Israel and the Jewish people.
We assist American victims of terrorism in vindicating their rights under the law, and seek to hold terrorists and sponsors of terrorism accountable for their actions.
We fight anti-Semitism and anti-Israel bias in the media and on college campuses.
We strive to enforce existing law and also to create new law in order to safeguard the rights of the Jewish people in the United States and Israel.
Our Mission
ZOA STATEMENT
The ZOA speaks out for Israel – in reports, newsletters, and other publications. In speeches in synagogues, churches, and community events, in high schools and colleges from coast to coast. In e-mail action alerts. In op-eds and letters to the editor. In radio and television appearances by ZOA leaders. Always on the front lines of pro-Israel activism, ZOA has made its mark.
Related Articles
OP-ED Fmr. Secy. Colin Powell: Defense Dept. Influences Presidential Policy