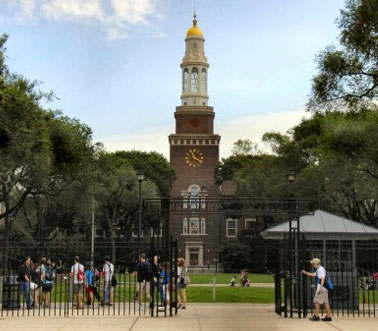 The Zionist Organization of America (ZOA) is pleased and proud to announce that Brooklyn College President Karen L. Gould issued a public statement last Friday, apologizing in full to the four Jewish students who were forcibly thrown out of an anti-Israel, anti-Semitic boycott, divestment and sanctions (BDS) event at Brooklyn College on February 7, 2013.  The anti-Semitic BDS event was sponsored by an anti-Israel group, the so-called Students for Justice in Palestine (SJP) and co-sponsored by the political science department.  President Gould’s public statement was part of a negotiated settlement between the ZOA and Brooklyn College, facilitated by mediators from the U.S. Department of Education’s Office for Civil Rights (OCR).  No other outside Jewish organization was involved.

Even prior to the anti-Semitic BDS event, several Jewish students came to the ZOA and reported that as Jews and Israel supporters, they felt threatened and intimidated at Brooklyn College, particularly in the political science department.  Many students were shocked and horrified by the department’s decision to co-sponsor the anti-Semitic BDS event which would be one-sided and promoting Israel’s destruction.  They were also shocked and horrified by what occurred at the event itself.

The ZOA – and students – tried repeatedly to resolve all these problems informally with Brooklyn College, but these efforts failed.  In July 2013, the ZOA filed a student-backed complaint against Brooklyn College under Title VI of the Civil Rights Act, alleging a hostile campus environment for Jewish students, particularly in the political science department.  If OCR concludes that a school has violated Title VI, the school risks losing its federal funding.

Triggered by the ZOA’s Title VI complaint, OCR notified the ZOA in September 2013 that it would be investigating what occurred at the BDS event.  OCR offered the ZOA and Brooklyn College the option of engaging in OCR’s Early Complaint Resolution (ECR) process, which is essentially mediation.  (The process could be terminated at any time, at which point OCR’s investigation would proceed.)

The ZOA and Brooklyn College agreed to the ECR process and the mediation session took place on December 3, 2013, with the aid of mediators from OCR.  Three students – Melanie Goldberg and Ari Ziegler, who had been forcibly expelled from the anti-Semitic BDS event; and Abraham Esses, student body president at the time of the forced expulsion – accompanied the ZOA’s Susan Tuchman, Esq. to the mediation session and participated fully.  Negotiations were completed in the weeks after the mediation session, facilitated by the OCR mediators.

ZOA National President Morton A. Klein praised Brooklyn College for forging this settlement with the ZOA, stating, “Brooklyn College has acknowledged the wrongdoing that occurred in connection with the February 2013 anti-Semitic BDS event, and has taken full responsibility for it.  This helps heal the wounds of the Jewish community at Brooklyn College, particularly the wounds of the four Jewish students who were forcibly expelled from the event without any justification.  We urge Brooklyn College to ensure that it work to truly promote civility and tolerance, and aggressively address harassment and discrimination.  The ZOA will continue to stay on top of the situation and make sure that the civil rights of Jewish students are fully protected.

“I also feel morally compelled to express the ZOA’s deep disappointment over the fact that a group that calls itself The Louis D. Brandeis Center for Human Rights Under Law issued a press release taking virtually full credit for this important accomplishment on behalf of Jewish students at Brooklyn College – when in fact the ZOA alone did all the work to negotiate this positive outcome.”

Susan B. Tuchman, Esq., Director of the ZOA Center for Law and Justice, echoed the praise for Brooklyn College in reaching this negotiated settlement with the ZOA, stating, “We are pleased that after months of negotiation with the ZOA, the College worked cooperatively with us in resolving allegations in the ZOA’s Title VI complaint.  On behalf of the ZOA, I thank the OCR mediators we worked with, who facilitated the entire mediation process. We also appreciate Hillel’s input and support.  And we thank the many Jewish students who came forward to report to the ZOA the very troubling problems they were facing at Brooklyn College.  Without their courage and conviction, and their support of the ZOA’s legal action, the important steps forward that Brooklyn College has taken would probably never have been achieved.”

Here is the text of President Gould’s statement:

STATEMENT OF PRESIDENT GOULD REGARDING THE

Last summer, I had the opportunity to meet with Melanie Goldberg, Michael Ziegler, and Ari Ziegler, who, along with Yvonne Juris, were students at Brooklyn College who were forced to leave the BDS event sponsored by the Students for Justice in Palestine (SJP) club and held in the Student Center on February 7, 2013.  While I had expressed my regrets to the students in person and in individual letters to them, I wish to publicly apologize on behalf of Brooklyn College to Melanie, Michael, Ari and Yvonne over the treatment they received.

The students were removed from the event based upon allegations by Carlos Guzman, an event organizer not affiliated with Brooklyn College, that the students were being disruptive and passing out flyers.  As I stated last spring in a campus-wide communication, based upon the findings of a two-month CUNY investigation of what occurred and interviews with more than 40 witnesses, Mr. Guzman’s allegations proved to be false.  The CUNY investigation concluded that “there was no justification for the removal of the four students.”  Melanie, Michael, Ari and Yvonne had every right to retain the papers  they were holding and to remain at the event, as they had not done anything to give rise to a reasonable belief that a disturbance was about to erupt.

The CUNY report stated that a plausible inference could be drawn that Mr. Guzman was motivated by political viewpoint inasmuch as he was apparently aware of the views of Melanie Goldberg from a prior event sponsored by the same student club.  The CUNY report went on to state that it could not draw that inference with sufficient confidence to make a definitive finding.  I was not present at the event.  However, it seems to me likely that Mr. Guzman sought the removal of these four students from the event because they held viewpoints contrary to those being promoted by the SJP.

The CUNY report also concluded that administrators and public safety officers on site deferred to Mr. Guzman, rather than determining independently if the students had disrupted the event. Deferring to Mr. Guzman’s assessment was clearly wrong, and I have conveyed this judgment to the administrators involved in the incident.

Since its founding in 1930, Brooklyn College has excelled at providing a high-quality, affordable education to students of diverse backgrounds.  The remarkable diversity of our student body, faculty, and staff is in fact one of our most important assets, and we celebrate it. The diversity of our community means, of course, that there will be diversity of viewpoints about a wide range of issues and topics, some of which may be highly controversial.  At all times, and however much we disagree with one another, we must be a place where every member of our community – students, faculty, and staff – feels welcome and is treated with dignity, regardless of his or her background, beliefs or faith.  Brooklyn College is an institution committed to fostering an engaged and civil learning environment where all views may be expressed without fear of intimidation or reprisal.  Brooklyn College will not tolerate any form of discrimination, including among others, discrimination based on race, religion, ethnicity, gender, sexual orientation, or age.  We will be steadfast in our commitment to ensure that all events on our campus transpire in an atmosphere of civility and mutual respect.

We would love to hear from you! Please fill out this form and we will get in touch with you shortly.
Trending Z
News March 12, 2014
ZOA Deplores that Pres. Trump Dined with Jew-Haters Kanye West & Nick Fuentes, and Demands he Condemn Them
Uncategorized March 12, 2014
ZOA Honors Trump With Rarely Given Herzl Award for His Great Pro-Israel Work – Joins Ranks of Balfour, Truman, Begin, Meir, Ben-Gurion
News March 12, 2014
ZOA Responds to Questions About Pres. Trump, Kanye West, Fuentes, etc. Issue
Uncategorized March 12, 2014
Zionist Organization of America Honors Donald Trump for Support for Israel, Jewish Community
Center for Law & Justice
We work to educate the American public and Congress about legal issues in order to advance the interests of Israel and the Jewish people.
We assist American victims of terrorism in vindicating their rights under the law, and seek to hold terrorists and sponsors of terrorism accountable for their actions.
We fight anti-Semitism and anti-Israel bias in the media and on college campuses.
We strive to enforce existing law and also to create new law in order to safeguard the rights of the Jewish people in the United States and Israel.
Our Mission
ZOA STATEMENT
The ZOA speaks out for Israel – in reports, newsletters, and other publications. In speeches in synagogues, churches, and community events, in high schools and colleges from coast to coast. In e-mail action alerts. In op-eds and letters to the editor. In radio and television appearances by ZOA leaders. Always on the front lines of pro-Israel activism, ZOA has made its mark.
Related Articles
OP-ED P.A.’s Abbas Reiterates His Long-Standing Holocaust Denial