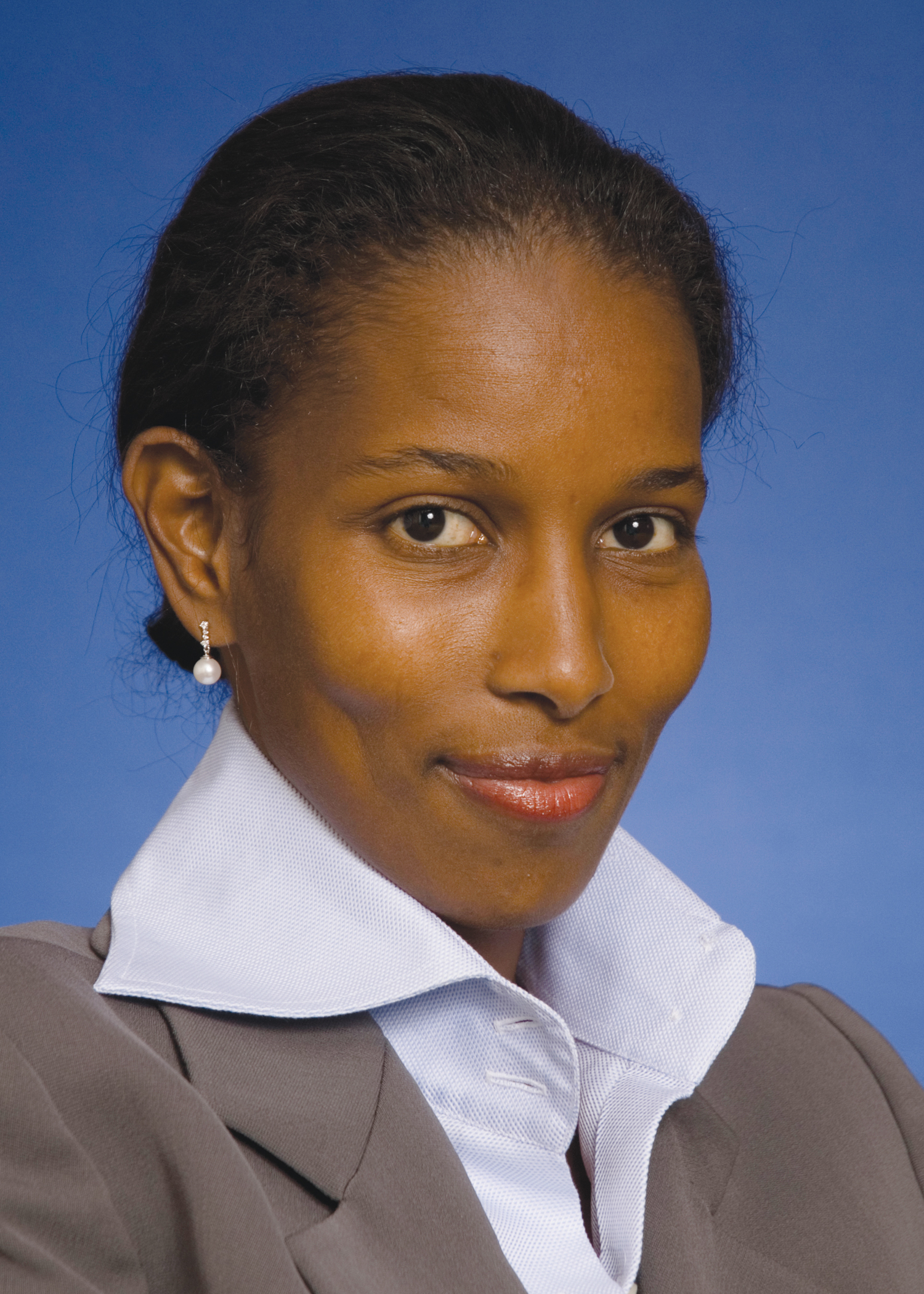 The Zionist Organization of America (ZOA) is shocked and has strongly criticized Brandeis University’s decision to rescind the awarding of an honorary degree to Ayaan Hirsi Ali at Brandeis’ commencement ceremony in May.  Ms. Hirsi Ali is a brave and outspoken author, scholar and advocate for the civil rights of women and girls around the world.  Brandeis caved to pressure from students, faculty, and the Council on American-Islamic Relations (CAIR), a Saudi-funded Islamist group whose officials have voiced support for terrorist movements like Hamas.  The Anti-Defamation League has described CAIR as “offer[ing] a platform to conspiratorial Israel-bashers and outright anti-Semites.”

Ayaan Hirsi Ali is a formerly devout Muslim who became critical of Islam and ultimately rejected her Muslim faith.  In a statement in yesterday’s Wall Street Journal, Ms. Hirsi Ali wrote, “For over a decade, I have spoken out against such practices as female genital mutilation, so-called ‘honor killings,’ and applications of Sharia [Islamic] Law that justify such forms of domestic abuse as wife beating or child beating.  Part of my work has been to question the role of Islam in legitimizing such abhorrent practices.”

In its April 8th statement withdrawing Ms. Hirsi Ali’s name as an honorary degree recipient, Brandeis acknowledged that Ali “is a compelling public figure and advocate for women’s rights,” and noted its respect and appreciation for Ali’s “work to protect and defend the rights of women and girls throughout the world.”  But Brandeis claimed to object to “certain of her past statements” that are purportedly “inconsistent with Brandeis University’s core values.”

Brandeis’s statement does not mention that its decision followed from pressure imposed by some students and faculty, and by the anti-Semitic, Israel-hating CAIR.  As John Podhoretz, the editor of Commentary wrote, “it is disgustingly laughable for Brandeis President Fred Lawrence to claim he had to withdraw the degree because of information he had only lately discovered. . . . My late uncle, Marver Bernstein, served as the university’s president from 1972 to 1983.  I know Marver would have been appalled beyond belief at his shameful successor’s monstrous capitulation to the screaming voices of unreason.  As should we all be.”  Daniel Mael, a Brandeis student who co-founded Brandeis Students for Accuracy about Israeli and Palestinian Affairs, said, “This highlights [Brandeis’s] shallow commitment to “Truth, Even Unto Its Innermost Parts” – the University’s motto.  Dr. Daniel Pipes, president of the Middle East Forum, accused Brandeis of capitulating to “Islamist pressure.”  David Harris, the Executive Director of the American Jewish Committee which itself has honored Ms. Hirsi Ali, said, “Much as we have long been admirers of Brandeis, this is not the University’s finest moment.”

ZOA National President Morton A. Klein and Susan B. Tuchman, Esq., Director of the ZOA Center for Law and Justice and a graduate of Brandeis University, strongly criticized Brandeis’s decision to withdraw the awarding of the honorary degree to Ayaan Hirsi Ali, stating, “Ayaan Hirsi Ali is a brave and outstanding hero, someone who at great risk to her own safety has turned her own personal suffering in her life under Islam into helping women protect and affirm their own basic rights and freedoms – to control their own bodies, to have access to education, to be able to work outside the home and control their own income, and to exercise their right to speak freely.  These are basic civil rights that all of us value, especially a university like Brandeis, which was founded largely because of the discrimination that Jews faced at American schools.  Brandeis’s core values are the pursuit of knowledge and the pursuit of the truth, wherever it may lead.  This is a shameful moment, where Brandeis is failing to live up to its own motto and mission.  The exceptional work of Ayaan Hirsi Ali, a courageous individual who continues to stand up for women’s civil rights, despite death threats, should be acknowledged, celebrated and honored by Brandeis University.

“Ironically, Brandeis President Frederick Lawrence, whom we were honored to host, together with his wife, at the ZOA’s Brandeis Dinner last November, is one of the nation’s leading experts on civil rights and free expression.  President Lawrence, of all people, should know that it’s a huge mistake, and a violation of the very principles that define Brandeis University, to bow to the pressure imposed by others who simply do not like that Ms. Hirsi Ali has exposed the problems with how Islam is interpreted and practiced in many countries, which are all based on her own experiences and education as a Muslim.

“We are also struck by the hypocrisy of Brandeis’ decision, because the University went ahead with conferring an honorary degree on South African Bishop Desmond Tutu in 2000.  Tutu may be respected for his activism in apartheid South Africa.  But his hatred of Jews and the Jewish State of Israel is appalling and intolerable.  Tutu has referred to Jews as ‘a peculiar people’ who ‘can’t ever hope to be judged by the same standards which are used for other people.’  He has attacked the ‘Jewish lobby’ as ‘too powerful’ and ‘scar[y].’  He has accused the Jews of exhibiting ‘arrogance’ and ‘power’ – classic anti-Semitic stereotypes.  And he has minimized the suffering during the Holocaust, by claiming that ‘the gas chambers’ made for ‘a neater death’ than one under apartheid.  Tutu has compared Israel to Germany under Hitler, and he has accused Israel of acting in an ‘unChristian’way.

“Yet Brandeis conferred an honorary degree on Tutu in 2000.  We do not recall students or faculty being up in arms about the University honoring a Jew-hater and Israel-basher.

Cleary, Tutu’s and Kushner’s ‘core values’ are inconsistent with Brandeis University’s, but Ms. Hirsi Ali’s are not.

“Brandeis also had no problem conferring an honorary degree on the playwright Tony Kushner at the 2006 commencement ceremony, despite his vicious anti-Zionist and anti-Israel views, and despite vehement opposition from the ZOA and others.  In a 2004 interview, Kushner called the establishment of the State of Israel ‘a mistake’ and stated that ‘it would have been better if Israel never happened.’  Kushner also falsely accused Israel of ‘ethnic cleansing’ and ‘deliberate destruction of Palestinian culture and a systematic attempt to destroy the identity of the Palestinian people.’  Kushner didn’t mince words about Israel supporters either.  He said that ‘the biggest supporters of Israel are the most repulsive members of the Jewish community and Israel itself has got this disgraceful record.’

“Kushner’s hateful views, based on a distortion of history and fact, clashed with everything that Brandeis University stands for.  While Brandeis is a non-sectarian University, it has a proud and undeniably strong Jewish history and close ties to Israel, which were degraded when the University went ahead and honored Tony Kushner in 2006.

“Yet Jehuda Reinharz, the president of Brandeis at the time, ignored Kushner’s bigoted views and defended the University’s decision to give Kushner an honorary degree, saying, ‘Just as Brandeis does not inquire into the political opinions and beliefs of faculty or staff before appointing them, or students before offering admission, so too the university does not select honorary degree recipients on the basis of their political beliefs or opinions.’

Why is there a different standard for Ayaan Hirsi Ali?  Cleary, Tutu’s and Kushner’s ‘core values’ are inconsistent with Brandeis University’s, but Ms. Hirsi Ali’s are not.

“That someone is critical of the way Islam is practiced, or any other religion for that matter, shouldn’t be a bar to recognizing that individual’s brave achievements in standing up for basic civil rights and freedoms.  Brandeis University made a huge mistake in rescinding its decision to honor Ayaan Hirsi Ali.  Instead of celebrating her, the University is silencing her, simply because her views on Islam are unacceptable to some.

Cleary, Tutu’s and Kushner’s ‘core values’ are inconsistent with Brandeis University’s, but Ms. Hirsi Ali’s are not.

“It’s not too late for Brandeis to correct the mistake and bestow the honorary degree that Ayaan Hirsi Ali so obviously deserves.”

We would love to hear from you! Please fill out this form and we will get in touch with you shortly.
Trending Z
Uncategorized April 10, 2014
FLASH: ISRAEL-JORDAN PEACE TREATY (1994) GUARANTEES JEWS ACCESS TO THE TEMPLE MOUNT – LET MY PEOPLE PRAY
Uncategorized April 10, 2014
ZOA Analysis: Most American Rabbis Who Are Boycotting Some Israeli Ministers Are From Extremist Left Wing Groups (J Street; T’ruah; JVP)
Uncategorized April 10, 2014
Israel’s “Right of Return” Grandparent Clause is De-Judaizing the Jewish State – Eliminate It
Uncategorized April 10, 2014
Exclusive: ZOA Accuses Ilhan Omar of Hating the U.S. ‘as Much as Israel,’ Lauds Kevin McCarthy for ‘Throwing Her Off the HFAC’
Center for Law & Justice
We work to educate the American public and Congress about legal issues in order to advance the interests of Israel and the Jewish people.
We assist American victims of terrorism in vindicating their rights under the law, and seek to hold terrorists and sponsors of terrorism accountable for their actions.
We fight anti-Semitism and anti-Israel bias in the media and on college campuses.
We strive to enforce existing law and also to create new law in order to safeguard the rights of the Jewish people in the United States and Israel.
Our Mission
ZOA STATEMENT
The ZOA speaks out for Israel – in reports, newsletters, and other publications. In speeches in synagogues, churches, and community events, in high schools and colleges from coast to coast. In e-mail action alerts. In op-eds and letters to the editor. In radio and television appearances by ZOA leaders. Always on the front lines of pro-Israel activism, ZOA has made its mark.
Related Articles
OP-ED Fmr. Secy. Colin Powell: Defense Dept. Influences Presidential Policy