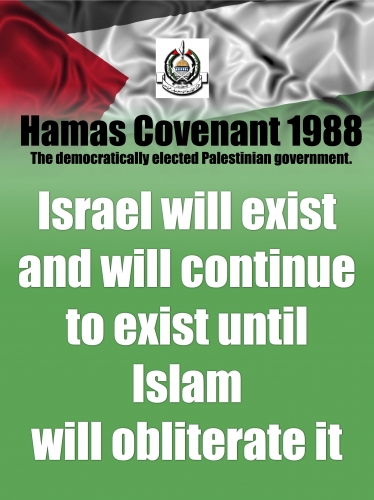 Why The Silence On Hamas’ Nazi-Like Charter, Calling For Murder Of Every Jew?
News Press Release

The Zionist Organization of America (ZOA) has expressed deep concern and puzzlement over the shocking silence by President Barack Obama, Secretary of State John Kerry, other Administration officials, the U.S. Congress, government officials around the world, and even almost all American Jewish leaders, over Hamas’ publicly-declared aim to murder Jews worldwide. Although many note that Hamas is committed to Israel’s destruction and does not accept Israel’s right to exist, few mention that Article 7 of the Hamas Charter calls for the murder of Jews and quotes a hadith (Islamic written sacred tradition ascribed to Muhammad), which states, “The Day of Judgment will not come about until Muslims fight the Jews (killing the Jews), when the Jew will hide behind stones and trees. The stones and trees will say O Muslims, O Abdulla, there is a Jew behind me, come and kill him.”

Last week, Mahmoud Abbas’ Fatah/Palestinian Authority (PA) concluded a reconciliation deal with Hamas, which has controlled Gaza since 2007. The Israeli Cabinet, by a unanimous vote, has stated that it cannot negotiate with a Fatah/Hamas Palestinian government.

ZOA National President Morton A. Klein said, “The ZOA has been astonished, mystified and deeply concerned for many years at the continuing international silence over the most evil of Hamas’ publicly-declared goals –– the worldwide murder of Jews. Many refer to Hamas’ devotion to the destruction of Israel and the use of terrorism against Jews, but almost no-one refers to the most startling and terrible fact that Hamas is a genocidal, Nazi-like organization that seeks to murder Jews everywhere.

The Israeli Cabinet, by a unanimous vote, has stated that it cannot negotiate with a Fatah/Hamas Palestinian government.

“While Prime Minister Netanyahu has referred to Hamas’ plans to murder Jews worldwide (as, for example, in this Fox News interview last week), President Obama, other heads of government, international leaders and American Jewish leaders have been silent on this score.

“Why are our Jewish leaders silent on the most evil, the most blood-curdling aim of Hamas?

“It is not as if this is a minor or abstract point in Hamas’ program. A July 2015 Palestinian Center for Public Opinion (PCP) poll found that 73% of Palestinian Arabs agree with the hadith about murdering the Jews quoted in Article 7 of the Hamas Charter.

“Incidentally, the same poll showed that 61% of Palestinians reject the idea of a peaceful Palestinian state living alongside Israel as the solution to the Arab/Israeli war, as against only a third –– 34% –– who accept it. Hamas’ genocidal, anti-peace plans are of the greatest relevance because Hamas is the second largest Palestinian faction, controls Gaza and is supported in its goals by large majorities of Palestinians.

“We urge all American Jewish organizations, its leaders as well as U.S. officials to begin publicly condemning Hamas’ Nazi-like goal of murdering every Jew.”

We would love to hear from you! Please fill out this form and we will get in touch with you shortly.
Trending Z
Uncategorized April 28, 2014
FLASH: ISRAEL-JORDAN PEACE TREATY (1994) GUARANTEES JEWS ACCESS TO THE TEMPLE MOUNT – LET MY PEOPLE PRAY
Uncategorized April 28, 2014
ZOA Analysis: Most American Rabbis Who Are Boycotting Some Israeli Ministers Are From Extremist Left Wing Groups (J Street; T’ruah; JVP)
Uncategorized April 28, 2014
Israel’s “Right of Return” Grandparent Clause is De-Judaizing the Jewish State – Eliminate It
Uncategorized April 28, 2014
Exclusive: ZOA Accuses Ilhan Omar of Hating the U.S. ‘as Much as Israel,’ Lauds Kevin McCarthy for ‘Throwing Her Off the HFAC’
Center for Law & Justice
We work to educate the American public and Congress about legal issues in order to advance the interests of Israel and the Jewish people.
We assist American victims of terrorism in vindicating their rights under the law, and seek to hold terrorists and sponsors of terrorism accountable for their actions.
We fight anti-Semitism and anti-Israel bias in the media and on college campuses.
We strive to enforce existing law and also to create new law in order to safeguard the rights of the Jewish people in the United States and Israel.
Our Mission
ZOA STATEMENT
The ZOA speaks out for Israel – in reports, newsletters, and other publications. In speeches in synagogues, churches, and community events, in high schools and colleges from coast to coast. In e-mail action alerts. In op-eds and letters to the editor. In radio and television appearances by ZOA leaders. Always on the front lines of pro-Israel activism, ZOA has made its mark.
Related Articles
OP-ED Fmr. Secy. Colin Powell: Defense Dept. Influences Presidential Policy