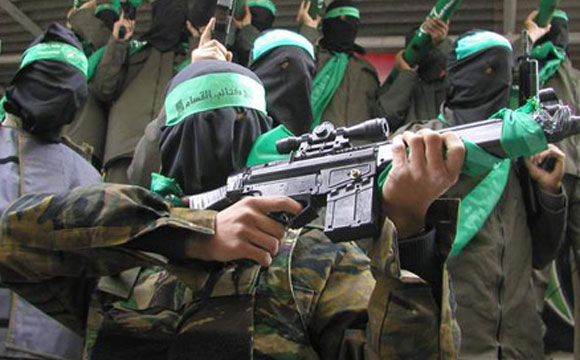 Incredibly, J-Street’s call came on the very same day that Hamas reiterated its demand for Israel’s destruction and explicitly refused to renounce violence against Jews and Israel.  Top Hamas official Hassan Yousef announced that the terror group would not renounce its commitment to violence and the destruction of Israel, will not recognize Israel and “will not give up the resistance.”  (See Adam Kredo, ‘New Palestinian Government Refuses to Renounce Violence,’ Washington Free Beacon, April 23, 2014).

Hamas’s Nazi-like Charter specifically calls for the murder of Jews and Israel’s destruction.  The U.S. State Department lists Hamas as a terrorist organization.

Hamas’s Nazi-like Charter specifically calls for the murder of Jews and Israel’s destruction.

Notably, the U.S. State Department spokeswoman, Jen Psaki, responded to the news of the Hamas-Fatah reconciliation deal, saying, “it’s hard to see how Israel can be expected to negotiate with a government that does not believe in its right to exist.”  (‘Jen Psaki, Spokesperson, Daily Press Briefing, Washington, DC, April 23, 2014’).

A Hamas-Fatah Palestinian Arab state would increase the power of Hamas to promote its genocidal agenda against Israel.  Also, Iran is a major donor to Hamas – and Iran would thus have great influence on the policies of any Hamas-Fatah state.

Shame on extremist J-Street for promoting yet another anti-Israel pro-radical-Islamist policy.  Virtually every position that J-Street has taken since its establishment endangers Israel’s security.

It is shocking that J-Street has become so comfortable with its radical extremist anti-Israel ideology that it has adopted this latest extremist position just one week before the vote will take place on J-Street’s application to become a member of the Conference of Presidents of Major American Jewish Organizations.  Even if one accepts the “big tent” philosophy for the Jewish community, J-Street’s anti-Israel extremism has once again clearly placed J-Street outside of the tent.

J-Street’s extremism is further reflected by the fact that Israelis from all sides of the spectrum reacted to the Hamas-Fatah reconciliation by rejecting involvement with Hamas.  For instance:

We would love to hear from you! Please fill out this form and we will get in touch with you shortly.
Trending Z
Uncategorized April 29, 2014
FLASH: ISRAEL-JORDAN PEACE TREATY (1994) GUARANTEES JEWS ACCESS TO THE TEMPLE MOUNT – LET MY PEOPLE PRAY
Uncategorized April 29, 2014
ZOA Analysis: Most American Rabbis Who Are Boycotting Some Israeli Ministers Are From Extremist Left Wing Groups (J Street; T’ruah; JVP)
Uncategorized April 29, 2014
Israel’s “Right of Return” Grandparent Clause is De-Judaizing the Jewish State – Eliminate It
Uncategorized April 29, 2014
Exclusive: ZOA Accuses Ilhan Omar of Hating the U.S. ‘as Much as Israel,’ Lauds Kevin McCarthy for ‘Throwing Her Off the HFAC’
Center for Law & Justice
We work to educate the American public and Congress about legal issues in order to advance the interests of Israel and the Jewish people.
We assist American victims of terrorism in vindicating their rights under the law, and seek to hold terrorists and sponsors of terrorism accountable for their actions.
We fight anti-Semitism and anti-Israel bias in the media and on college campuses.
We strive to enforce existing law and also to create new law in order to safeguard the rights of the Jewish people in the United States and Israel.
Our Mission
ZOA STATEMENT
The ZOA speaks out for Israel – in reports, newsletters, and other publications. In speeches in synagogues, churches, and community events, in high schools and colleges from coast to coast. In e-mail action alerts. In op-eds and letters to the editor. In radio and television appearances by ZOA leaders. Always on the front lines of pro-Israel activism, ZOA has made its mark.
Related Articles
OP-ED Fmr. Secy. Colin Powell: Defense Dept. Influences Presidential Policy