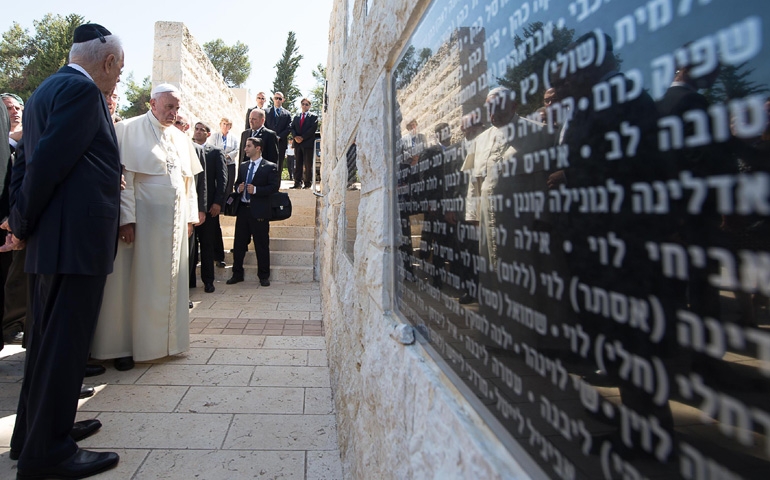 The Zionist Organization of America (ZOA) has expressed concern and criticism that Pope Francis met on his visit to Israel with the Palestinian Authority (PA) Mufti of Jerusalem, Sheikh Muhammad Hussein, a vicious, internationally condemned anti-Semite who, among many hateful and obscene statements, said in 2012 that it was the destiny of Muslims to kill Jews.

The ZOA is also critical of the Pontiff for choosing to pause during his visit to Bethlehem at a section of Israel’s security barrier which included graffiti proclaiming the obscene comparison of the Palestinian Arabs in Bethlehem to the Jews in the Warsaw Ghetto, as well as graffiti supporting Boycott, Divestment, Sanctions (BDS), the campaign to falsely malign and delegitimize Israel as a serial human rights abuser. By appearing and offering a prayer at the security barrier in this way, the Pope bolstered the lie that the barrier, rather than being a life-saving device, is a repressive device which, like the Berlin Wall, should be torn down. Rather, the Pope should have truthfully and publicly stated that Jew-killing Palestinian terrorists caused this fence to be built.

The ZOA was also critical of the Pontiff ludicrously calling PA dictator Mahmoud Abbas a “man of peace,” given a long anti-peace record that includes Abbas calling for a Jew-free Palestinian state; refusing to implement Palestinian commitments under the Oslo agreements to arrest terrorists, disband and outlaw terrorist groups, end the promotion of incitement to hatred and murder in the PA-controlled media, mosques, schools and youth camps; demanding the freeing of blood-soaked jailed Palestinian terrorists; his demand that each and every Jew-killing terrorists must be released from Israeli prisons; paying stipends to jailed Palestinian terrorists and the families of deceased Jew-killers; refusing to negotiate with Israel for virtually all of the past five years; honoring and glorifying Palestinian terrorists living and dead; calling terrorists “heroes” and “martyrs”; telling Arab leaders that “If you want war, and if all of you will fight Israel, we are in favor”; refusing to recognize Israel as a Jewish state; and, this month, concluding a reconciliation agreement with the U.S.- and E.U.-recognized terrorist organization Hamas, which calls in its Charter for the destruction of Israel and the murder of Jews.

ZOA National President Morton A. Klein said, “We acknowledge and praise Pope Francis’ action during his visit to the Middle East in condemning the recent vicious and murderous anti-Semitic attack in Brussels and the recent vicious attack on two Jews in Paris. The Pope spoke with dignity and eloquence at Yad Vashem, the Western Wall and at the terror victims memorial. We particularly note that Pontiff was the first Pope to visit Israel to lay a wreath at the tomb of Theodor Herzl, the founder of the modern Zionist movement.

“For all the many good and proper things that the Pope did on this trip, we remain nonetheless appalled that he knowingly met with the PA Mufti, a Nazi-like anti-Semite who promotes the murder of Jews.

“Mufti Sheikh Muhammad Hussein’s repulsive record of anti-Semitic hate speech –– like calling Jews “the enemies of Allah” and saying that “it is Muslim destiny to kill the Jews” –– is on the public record (please see below). These blood-curdling, obscene statements amounting to calls for a genocide of Jews is nothing new in Mahmoud Abbas’ PA and go hand-in-hand with other forms of incitement to hatred and murder, like naming schools, sports teams and streets after Jew-killers, glorifying living and dead terrorists and offering rewards and stipends to their families.

“There was no excuse for dignifying Muhammad Hussein and bestowing upon him unmerited legitimacy with a Papal meeting. It is shocking that the Pope did not decline this meeting.

“We are also deeply concerned and alarmed that Pope Francis paid an unscheduled visit to the security barrier near Bethlehem, where it is covered with viciously anti-Semitic and anti-Israeli graffiti, and paused to make a prayer. The only conceivable message one could take from this act is that the security barrier, which has hindered Palestinian terrorists from carrying out terrorist attacks inside Israeli cities, is a repressive device that should be done away with, rather than a life-saving one that has its place.

“We also are deeply disappointed and critical that Pope Francis chose to call Mahmoud Abbas ‘a man of peace.’ As we have noted, Mahmoud Abbas has done nothing to deserve that praise and to call him a man of peace, especially so soon after he forged a reconciliation deal with the Hamas terrorists, is not mere white-washing, but an outright lie that turns truth on its head. The Pope could have uttered apolitical words about the need for peace without bestowing this unmerited praise on the anti-Semitic dictator Abbas and his anti-peace acts.”

We would love to hear from you! Please fill out this form and we will get in touch with you shortly.
Trending Z
Uncategorized May 28, 2014
ZOA Analysis: Most American Rabbis Who Are Boycotting Some Israeli Ministers Are From Extremist Left Wing Groups (J Street; T’ruah; JVP)
Uncategorized May 28, 2014
ZOA: Israel’s Reasonable Judicial Reform Proposals Are Good for Democracy, the Rule of Law and the Economy
News May 28, 2014
ZOA is Disappointed, Offended and Frightened by 211 U.S. House Votes Supporting Jew-Hating, Israel-Hating Rep. Ilhan Omar
Uncategorized May 28, 2014
Israel’s “Right of Return” Grandparent Clause is De-Judaizing the Jewish State – Eliminate It
Center for Law & Justice
We work to educate the American public and Congress about legal issues in order to advance the interests of Israel and the Jewish people.
We assist American victims of terrorism in vindicating their rights under the law, and seek to hold terrorists and sponsors of terrorism accountable for their actions.
We fight anti-Semitism and anti-Israel bias in the media and on college campuses.
We strive to enforce existing law and also to create new law in order to safeguard the rights of the Jewish people in the United States and Israel.
Our Mission
ZOA STATEMENT
The ZOA speaks out for Israel – in reports, newsletters, and other publications. In speeches in synagogues, churches, and community events, in high schools and colleges from coast to coast. In e-mail action alerts. In op-eds and letters to the editor. In radio and television appearances by ZOA leaders. Always on the front lines of pro-Israel activism, ZOA has made its mark.
Related Articles
OP-ED Fmr. Secy. Colin Powell: Defense Dept. Influences Presidential Policy